Mizzou gets the 89-85 victory over Mississippi State in OT 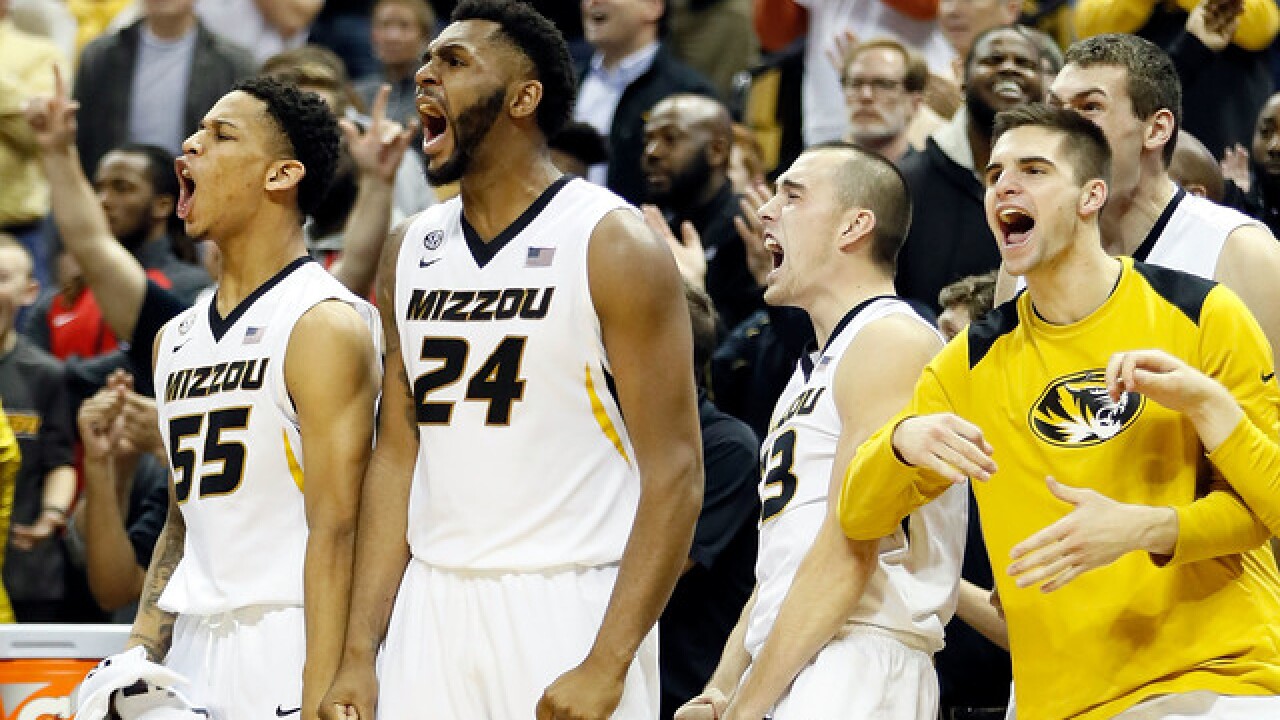 Copyright 2018 Scripps Media, Inc. All rights reserved. This material may not be published, broadcast, rewritten, or redistributed.
Jamie Squire
<p>COLUMBIA, MO - DECEMBER 19: Blake Harris #55, Kevin Puryear #24 and Cullen VanLeer #33 of the Missouri Tigers react from the bench after the Tigers scored during the game against the Stephen F. Austin Lumberjacks at Mizzou Arena on December 19, 2017 in Columbia, Missouri. (Photo by Jamie Squire/Getty Images)</p>

(AP) — Kevin Puryear had not made a 3-pointer since Jan. 10, missing a dozen attempts since then.

But with the shot clock running out and only 10 seconds left in overtime, Puryear made a 3 from the left corner to give Missouri the lead in an 89-85 victory over Mississippi State on Saturday.

“I knew I was going to shoot it when I got it, because my guy was helping off,” said Puryear. “I had a wide-open 3 in the corner. It was up to me to let it go.”

It was the fourth straight victory for the Tigers (17-8, 7-5 Southeastern Conference) and snapped a four-game winning streak for the Bulldogs (18-7, 6-6).

Mississippi State didn’t go down easily. The Bulldogs scored the final 12 points of regulation, fueled by a full-court press that gave Missouri fits. Lamar Peters sent the game into overtime when he stole the ball from Kassius Robertson and made a pull-up 3-pointer with 25 seconds left.

Peters had a chance to be the hero again after Puryear’s big shot in overtime, but he was called for an offensive foul just before making what would have been a go-ahead 3-pointer. Robertson completed the scoring with two free throws, finishing with a team-high 22 points.

“I’m really proud of our team, the way they fought,” Mississippi State coach Ben Howland said. “The way they came back really showed an incredible amount of heart and toughness.”

Missouri, averaging a SEC-high 14.8 turnovers per game, committed only three miscues in the first half and opened a 42-33 lead at the break by making 7 of 12 3-pointers.

Howland changed his defensive strategy in the second half, as the Bulldogs stopped double-teaming Missouri’s big men. After shooting 60 percent from the field in the first half, the Tigers made just 40 percent in the second half. Still, they were in firm control until the final 97 seconds, when their ball-handling weakness was exposed.

“We made it a lot tougher down the stretch than we would have liked, but that’s part of growth,” Missouri coach Cuonzo Martin said. “I was excited our guys maintained composure, focus and fight. We really executed on both sides of the ball to get the stops we needed.”

Holman scored the first five points of overtime to give Mississippi State an 84-79 advantage. Ado made 1 of 2 free throws with 39 seconds left to push the Bulldogs ahead 85-84.

Missouri looked like it might not even get a shot off in response, but when Robertson drove toward the basket, he drew an extra defender and found Puryear, who picked the right time to end his long-range shooting slump.

“Kash being one of our better scorers — or the scorer — you want the ball in his hands to make a play,” Puryear said. “It was very unselfish of him to kick it to me in the corner.”

Mississippi State: Howland decided against calling a timeout after Puryear’s go-ahead 3-pointer with 10 seconds left in overtime. He wanted to get a shot exactly like the one Peters made. Unfortunately for the Bulldogs, Peters’ 3-pointer swished after he was called for an offensive foul for pushing off on Geist.

Missouri: The Tigers, who finished last in the SEC the previous three years, continued to solidify their credentials for the NCAA Tournament.

It was the third-annual “Rally for Rhyan Game” at Mizzou Arena. The event honors 7-year-old Rhyan Loos, the daughter of former Missouri assistant coach and current athletic department official Brad Loos, and is a fundraiser for the fight against pediatric cancer. Rhyan Loos has been battling neuroblastoma brain cancer, but Brad Loos told the crowd at halftime that her tests have shown no sign of cancer for the last year.

Every Missouri player wore a warmup shirt with the name of a local pediatric cancer patient. Puryear’s shirt had Rhyan Loos’ name on the back.