How KC can get victory number ten 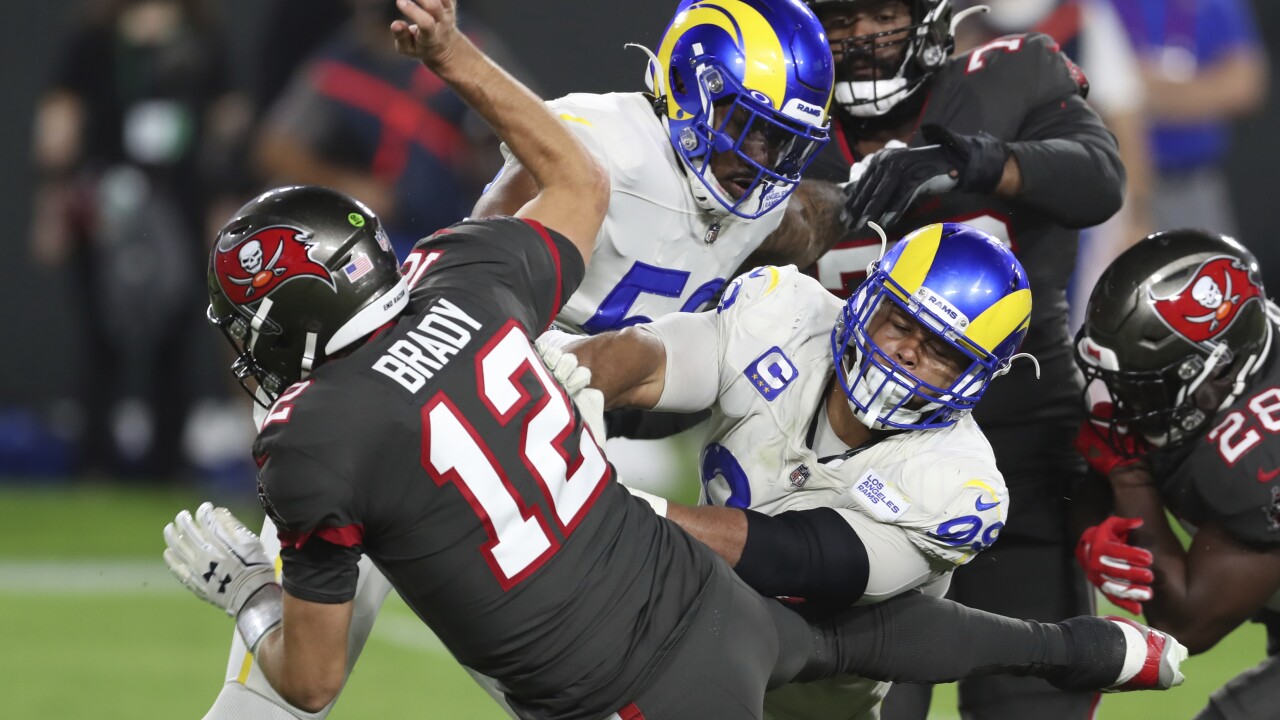 Mark LoMoglio/AP
FILE - In this Monday, Nov. 23, 2020, file photo, Los Angeles Rams defensive end Aaron Donald (99) sends Tampa Bay Buccaneers quarterback Tom Brady (12) flying after a pass attempt during the first half of an NFL football game in Tampa, Fla. Donald just played two consecutive football games without making a tackle for the first time in his life. At Tampa, the Los Angeles Rams' All-Pro defensive tackle didn't even make a single play that registered in the NFL's statistics in his 62 snaps: No sacks, no tackles, no quarterback hits. Donald doesn't look at stat sheets — and he had no need to do so in Tampa. (AP Photo/Mark LoMoglio, File)

KANSAS CITY, Mo. — The Kansas City Chiefs make their first trip back to Tampa Bay since the 2012 season. A lot has changed since that 2-14 season. Owner Clark Hunt hired Andy Reid who has yet to experience a losing season. The team drafted a franchise quarterback and MVP in Patrick Mahomes. The team also won its first Lombardi trophy in 50 years.

On the other sidelines is arguably one of the best quarterbacks to ever play the game in Tom Brady, who is on the back nine of his likely first ballot hall of fame career. The Chiefs will have a unique test against a playoff caliber team on Sunday.

1. Pressure Tom up the middle
Brady doesn’t like pressure between the A and B gaps. He has lost a lot on the velocity of his throws. So the key for Tom is to be able to step up in the pocket. Collapsing the pocket in on Brady will create a lot of sack opportunities and disrupt their passing game.

2. Force him to throw past 20 yards
Brady has yet to complete a pass since week 8 over 20 yards. He is 0 for 19 with 3 interceptions. Brady is trying to keep his passes to short check downs or within the 10 yard range. The Chiefs would benefit from utilizing zone coverage to take away some of their key passes over the middle and force check downs or deep passes. It would also benefit the pass rush with Brady holding the ball longer.

3. Misdirect them
The Bucs defense is one of the top five teams in the NFL against the run. They are fast to the perimeter and close down screens quickly. Where they open themselves up is with their aggressive style. Double moves off screens or misdirection will lead to some positive plays to move the chains if not more.

4. Play-Action pass and aggressively attack the middle
The Bucs will fly up to stop the run. It is one of the things the defense prides themselves on. It also allows teams to routinely convert over top of them. A healthy dose of play-action should help the Chiefs create voids quickly.

Patrick Mahomes has one of his last opportunities to tie up the Tom Brady match-up at two even on Sunday.