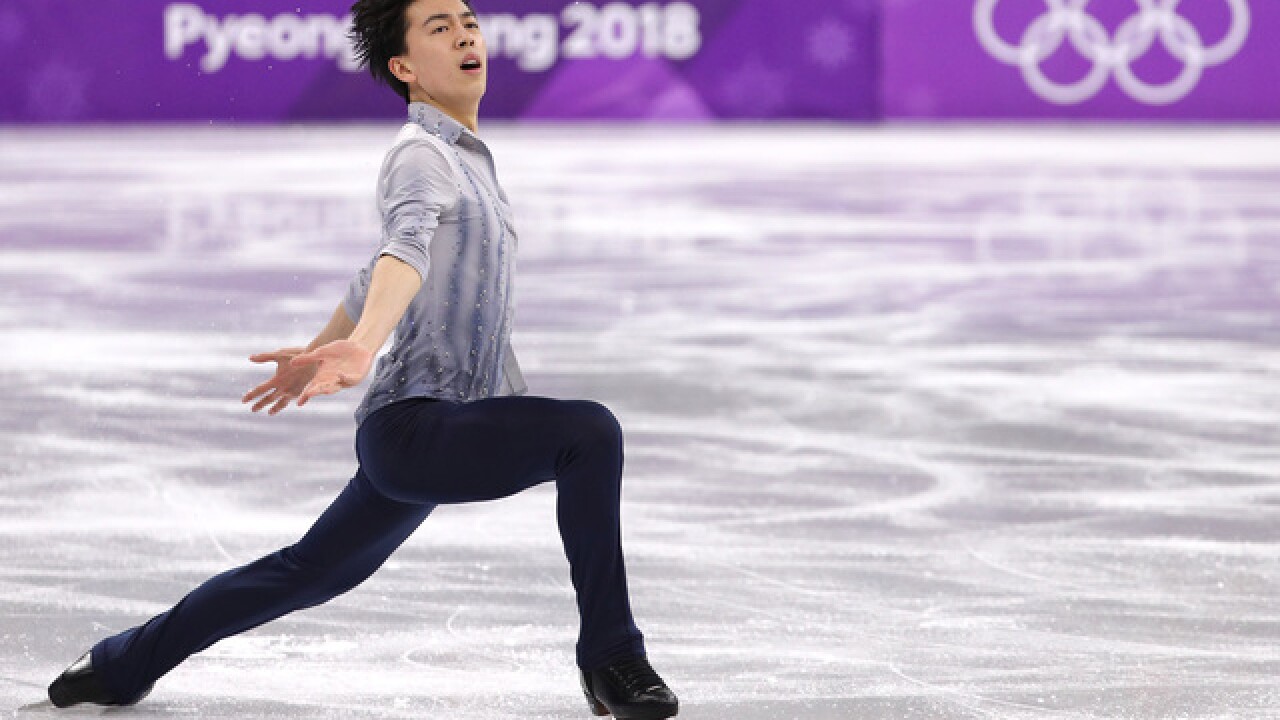 GANGNEUNG, South Korea (AP) — The personality of American figure skater Vincent Zhou, who made his Olympic debut with a superb short program Friday, was neatly summed up by his social media response to a fan who recently asked what era he would visit if he could travel back in time.

"If I time traveled," he said, "I would likely end up in outer space because Earth is moving at 67,000 mph and time travel is only time travel and not spacetime travel. If you traveled back in time 1 seconds, you'd be (about) 1,116.667 miles into space away from the surface of Earth where you were just standing. To successfully end up on Earth after time travel, science would have to find a way to make up those miles. Teleportation of matter is not possible. Yet."

"But to answer the original question," Zhou continued in another Tweet, "I would go back to 1984 to fully experience the release of 'Take On Me' by a-ha."

Not just brilliant but bemusing.

"Part of it is from all I've gone through," he explained. "I've gained a pretty good perspective on the world, and that helps me make appropriate and witty remarks."

Despite that, Zhou has been largely overshadowed by his teammates during the Pyeongchang Olympics.

The openly gay Adam Rippon has become a media darling, combining excellent skating to help the U.S. win team bronze with an unfiltered approach to interviews. The talented Nathan Chen had been tipped as a gold medal favorite until everything went awry during his short program.

Together, they had held the spotlight until Zhou landed the first quad lutz in an Olympic event, and put together the best short program of his career to briefly take the lead.

He wound up 12th among 30 skaters, easily qualifying for Saturday's free skate.

Make no mistake, Zhou is trying to finish as high as possible during these Olympics, and a top-10 result is hardly out of reach. But he also knows the next Olympics could be more his time, the moment when everything aligns and he contends for a medal.

That doesn't seem so far away considering how far Zhou has already come.

You see, Zhou's parents emigrated from China in the early 1990s, settling in California to attend graduate school. Both became successful computer scientists in Silicon Valley, Zhou's father with Google — where he still works — and his mother as a groundbreaking programmer with Oracle.

It was after they had Zhou and his older sister, Vivian, that their precocious boy took an interest in figure skating. And with no top-level coaching available in the Bay Area, the family decided that his mom, Fei Ge, would move with Zhou to Southern California in pursuit of his dream.

Things became tight with only one income. Living apart from the other half of the family was tough.

Zhou's mother admits she thought Zhou would take figure skating to a certain level and grow tired of it, and the separation would be a short-term arrangement. But he wound up excelling, and they would continue living and training in Southern California before moving to Colorado years later.

Meanwhile, his sister became an accomplished diver, and she's now pursuing a degree in brain and cognitive science at Massachusetts Institute of Technology.

"My family has sacrificed absolutely everything for me," Zhou said, half-joking that his figure skating career has made him the oddball in a family of brilliant scientists. "I think that's given me more maturity than a lot of kids my age."

Not that Zhou isn't smart. He graduated from high school at 16.

Lots of kids his age aren't pondering the scientific problems of time travel, either.

The reality is Zhou has little interest in what most kids his age do. He would rather spend his time writing poetry or deep in thought, or on the practice ice trying to perfect his array of quadruple jumps.

"A lot of the pressure in skating does come from the outside," he said. "There are fans who want to give you a standing ovation after skating a clean performance, there are people who expect you to improve and be a complete skater. There's pressure coming from all sides. But the biggest source of pressure is from myself. Sometimes I don't show it on the outside, but I'm a really ambitious person."

That was evident in his quad-filled short program at the Pyeongchang Games.

"I always want to be the best, but I also do have a sense of realism," he said, "and I know that winning the Olympics isn't really realistic. So it's fortunate I don't have that pressure on myself. I can't imagine what it's like for the people vying for the title. But I definitely want to put out two great performances and show people what I'm capable of.