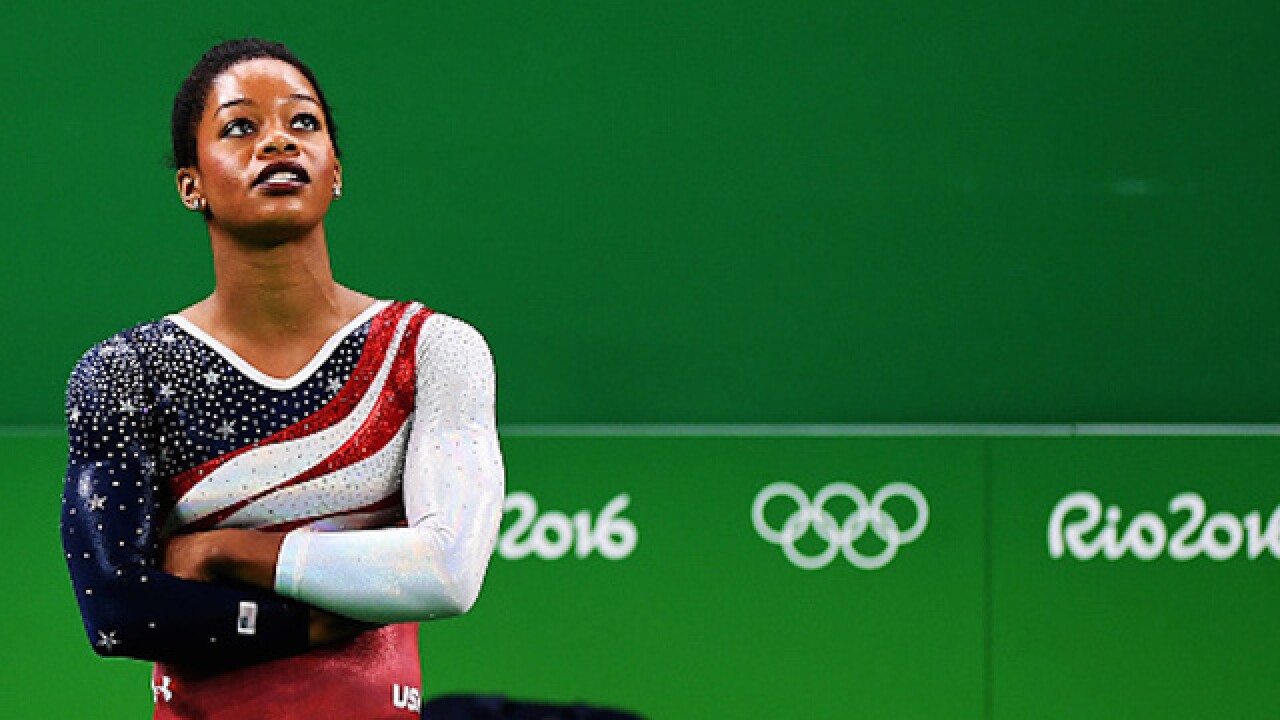 Laurence Griffiths
<p>RIO DE JANEIRO, BRAZIL - AUGUST 09: Gabrielle Douglas of the United States looks on the monitor to display the score after Lauren Hernandez competing on the floor during the Artistic Gymnastics Women's Team Final on Day 4 of the Rio 2016 Olympic Games at the Rio Olympic Arena on August 9, 2016 in Rio de Janeiro, Brazil. (Photo by Laurence Griffiths/Getty Images)</p>

RIO DE JANEIRO (AP) — The hope for one last trip to the Olympic medal podium gone when she stalled early in her routine during the uneven bars final on Sunday, Gabby Douglas decided to take a stand of a different kind.

Against the online criticism that's dogged the 2012 Olympic champion seemingly from the moment the gold medal was draped around her neck four years ago. Against the backlash on everything from her hair to her attitude. Against the bullying on social media that's left her staring down at her phone in disbelief too many times to count.

Douglas is over it. All of it.

Yes, her comeback didn't end quite the way she envisioned. Yet Douglas isn't second-guessing her decision even though she'll leave Rio with "only" a team gold, pushing her total to three spanning two games.

"In my head I pictured it a little bit differently," she said after finishing seventh in the uneven bars final. "You want to picture yourself being on top and doing amazing gymnastics."

At times Douglas did. She was second to teammate Simone Biles at the 2015 world championships and validated national team coordinator Martha Karolyi's choice to bring her to Rio by putting up the third-highest score in the all-around during qualifying before helping send Karolyi into retirement with a dominant performance in the team final.

The trouble with Douglas, however, is that gymnastics is typically only part of the story.

A small but vocal portion of Twitter lashed out when she was the only member of the "Final Five" to not place her hand over her heart during the playing of "The Star Spangled Banner." It grew louder during the all-around final when cameras caught her quietly sitting while the rest of Team USA cheered on Biles and Aly Raisman to a one-two finish.

"I apologize if that made me seem to be really mad in the stands," Douglas said. "I was supporting Aly. I will always will support them and respect them. I don't want anyone to take it as jealous or I wanted attention. Never. I support them and I'm sorry I wasn't showing it."

It followed a familiar pattern that's followed Douglas around since London, when she oddly found herself having to defend her hair minutes after becoming the first African-American woman to win the Olympic title.

"When they talk about my hair or not putting my hand over my heart or being very salty in the stands, really criticizing me ... for me it was really hurtful," Douglas said.

She later added: "Did I choose my hair texture? No. I'm grateful for having this hair on my head. When you read that hurtful stuff you're like 'OK, wow.'"

While Douglas tried to block it out, it hasn't been easy. She became a sensation in 2012, had her life story made into a TV movie, switched coaches three times and became the focal part of "Douglas Family Gold," a reality TV series executive produced in part by herself and her mother that focused on Douglas' bid to become the first repeat Olympic champion in nearly 50 years.

In a way, her final performance on the Olympic stage mimicked the last few years. She lost momentum early in her set and could have bailed. Instead she powered through it and nailed her dismount. Her score of 15.066 wasn't near the top three but she walked off the podium with a hug from coach Christian Gallardo and a smile.

Perhaps for the last time as a competitor. Douglas will be a fixture on the post-Olympic barnstorming tour but is in no hurry to discuss her long-term future. She'll move from Columbus, Ohio — where she's been training the last two years — to be with her family in Los Angeles. It's been a long and occasionally bumpy ride. She's fine if it stops.

"When you go through a lot and you have so many difficulties and people against you sometimes, it kind of just determines your character," she said. "Are you going to stand or are you going to crumble? I have no regrets coming back for a second Olympic team. It's been an amazing experience. It's been teaching me a lot."