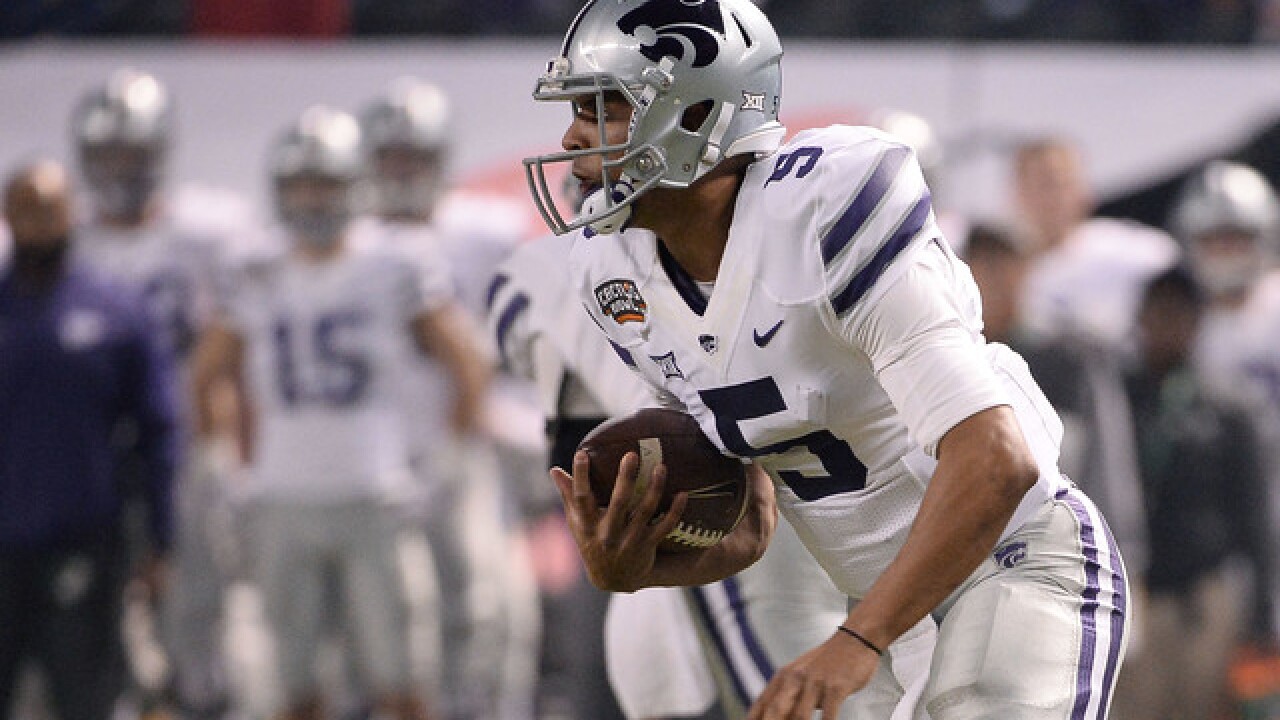 Copyright 2018 Scripps Media, Inc. All rights reserved. This material may not be published, broadcast, rewritten, or redistributed.
Jennifer Stewart
<p>PHOENIX, AZ - DECEMBER 26: Quarterback Alex Delton #5 of the Kansas State Wildcats runs the football 68 yards for a touchdown against UCLA Bruins in the first half of the Cactus Bowl at Chase Field on December 26, 2017 in Phoenix, Arizona. (Photo by Jennifer Stewart/Getty Images)</p>

Kansas State coach Bill Snyder wanted to see his offense operating at a tidy clip when his team split into purple and white squads for its spring game.

The 78-year-old coach got what he was looking for in a showdown between quarterbacks Alex Delton and Skylar Thompson on a rainy Saturday, with the purple squad winning 31-28.

"If you watch it, it's virtually the same — both of them can run it, both of them can throw it," Snyder said this week. "If those things are equal, then it boils down to being able to manage the ballgame and how we make decisions. All those are key elements, and that is true of any quarterback."

Both quarterbacks have experience in far more important games than a spring scrimmage.

Delton was dynamic in leading the Wildcats to a bowl victory over UCLA, and Thompson showed some moxie when he led them to a road victory over Oklahoma State last season.

Their competition is expected to continue right into the fall, though Snyder made it clear that he would prefer someone takes a significant step to the forward.

"That is truly the case. You would like to have an established number one," he said, "but you have two guys that are going to play, there is no doubt about it. To have a number one is significant. We would like to move in that direction — that does not mean it always happens — but that is truly what we are striving for. In all reality, that's true at every position."

Here are some of the other takeaways from the Kansas State spring game:

INJURY UPDATE: Among those players who did not play because of various injuries were OLs Dalton Risner and Abdul Beecham, both expected to start next season, and DBs Kendall Adams and Denzel Goolsby. That allowed OLs Nick Kaltmayer and Josh Rivas and DBs Jahron McPherson and Brock Monty to see more action, along with junior college transfer Kevion McGee.

TAYLOR SHINES: After WR Byron Pringle left early for the NFL, the Wildcats were desperate for a big-play threat in the passing game. Redshirt freshman Chabastin Taylor dazzled in the spring game with five catches for 118 yards and two touchdowns.

SPECIAL TEAMS SHORTCOMINGS: The Wildcats must replace the punter and kicker from a year ago, and the candidates at both spots struggled. Nick McLellan and Jake Roark both missed field-goal attempts and Bernardo Rodriguez hit a punt that traveled just 31 yards.

RUNNING MAN: RB Alex Barnes showed why he'll again be the featured ball-carrier, running 18 times for 94 yards and a touchdown. Many of those yards came after first contact.

OTHER NAMES TO KNOW: LBs Elijah Sullivan and Da'Quan Patton showed why they are poised to take over starting jobs, combing for 16 tackles for the white squad. WRs Landry Weber and Zach Reuter and TE Adam Harter also had TD catches, while FB Luke Sowa scored on a 39-yard second-half run.