Reid: Chiefs locker room will ‘get real’ about mistakes after Raiders loss 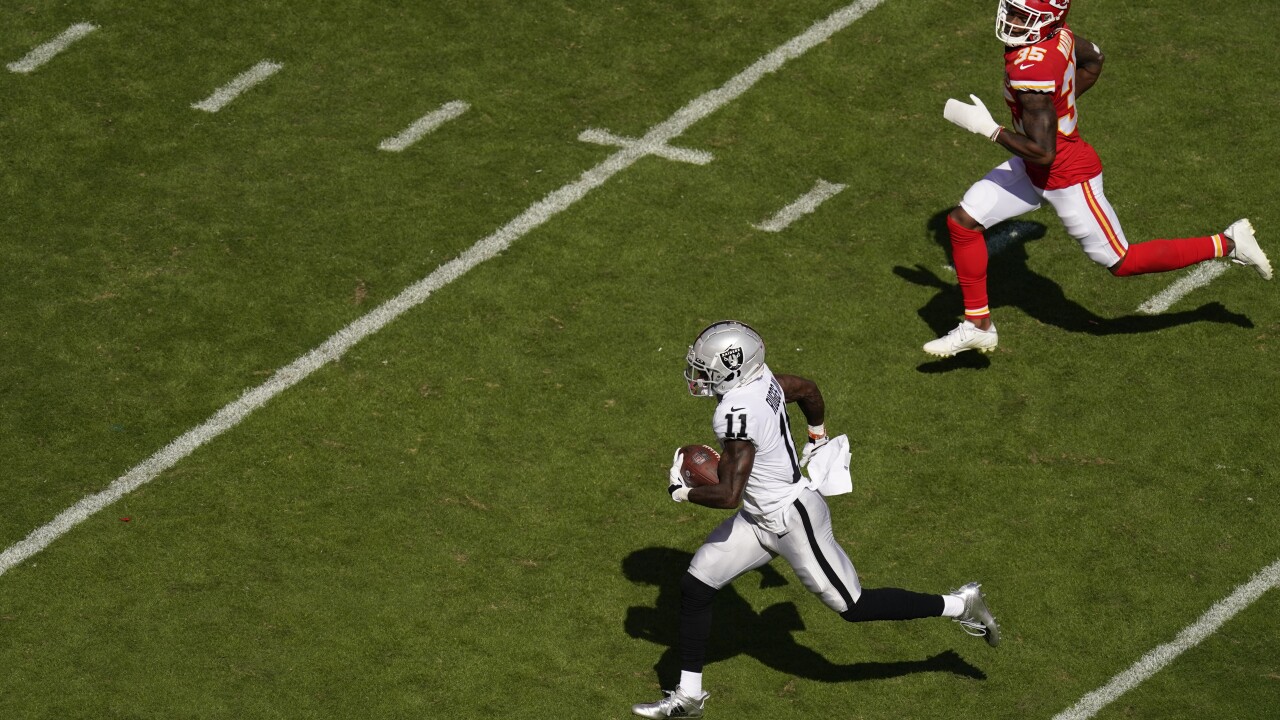 KANSAS CITY, Mo. — Chiefs coach Andy Reid doffed his cap one last time to the Las Vegas Raiders on Monday, one day after a 40-32 loss at Arrowhead Stadium.

“This was a team that played better than we did yesterday and coached better,” Reid said. “They came out with the win.”

As he did in the aftermath of Sunday’s loss, Reid again cited penalties — Kansas City had 10 accepted against them for 94 yards — and big plays allowed by the defense — the Raiders had four plays of at least 40 yards — among the biggest contributing factors.

He also vowed that the Chiefs would learn from those mistakes and get better, starting with next Monday’s game at the Buffalo Bills — a game that was originally scheduled for Thursday but has been postponed due to COVID-19 scheduling issues.

The idea of “getting real” in the postgame evaluation process was an oft-repeated theme for Reid.

He said the Chiefs’ locker room is filled with players who aren’t afraid to take responsibility for mistakes and will evaluate their performance fairly and honestly with an eye toward improving.

“As long as you’re real with yourself and you work hard during the upcoming week, normally it gives you an opportunity to get better …,” Reid said. “There’s some things we can learn from it, and we’ll learn from it — both coaches and players.”

Penalties against Kelechi Osemele and Travis Kelce cost the Chiefs pair of touchdowns, leading to a punt and a field goal.

Coverage mistakes led to a pair of long touchdown passes in the first half, while Tyrann Mathieu had a holding penalty that kept alive another Raiders touchdown drive.

Kansas City, which managed a meager 25 yards on its first 15 plays in the second half, also blew coverage on a key third-and-18 play, which turned into a 42-yard catch and run for Hunter Renfrow.

“I think everybody has a little piece of the pie here,” Reid said.

Of course, all those blunders were apparent during the game and Reid didn’t identify a deeper issue after watching the game film.

“I wouldn’t tell you it surprised me, because I felt like we had a pretty good bead on it during the game,” he said. “We need to play better and, offensively, I need to put the guys in better position. I’m sure Spags (defensive coordinator Steve Spagnuolo) would probably tell you the same thing with his guys.”

Injuries were another major storyline from Sunday’s loss.

Reid didn’t have an update yet on wide receiver Sammy Watkins, who left Sunday’s game with a hamstring injury, but his availability is critical for the Chiefs’ offense.

Mecole Hardman Jr. will see a bigger role if Watkins is sidelined at Buffalo.

“He (Watkins) plays a little bit of the low post for you and does a good job with that,” Reid said of his role with the offense. “He’s strong, but we can work around that. We’ve got other guys who can step in.

Reid added, “Mecole just needs to keep growing and keep working. He got a few reps yesterday, so that’s a step forward for him.”

Osemele, who left the game after tearing tendons in both knees, will be sidelined indefinitely.

Veteran offensive lineman Mike Remmers will move into the starting lineup at left guard, while the Chiefs wait for Martinas Rankin, who is currently on the physically unable to perform list, works his way back from a torn ACL last season.

“Rank has done a good job working to get back,” Reid said. “He’s not quite there yet.”