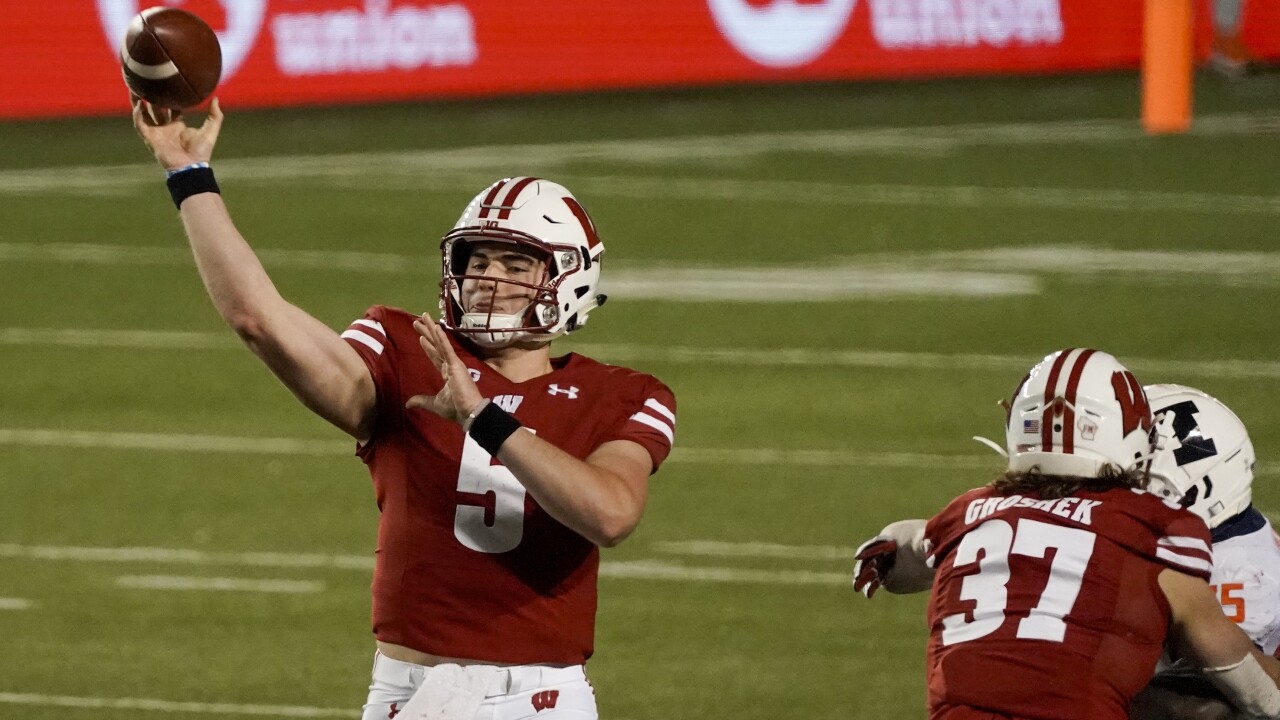 (Copyright 2020 The Associated Press. All rights reserved. This material may not be published, broadcast, rewritten or redistributed.)
Morry Gash/AP
Wisconsin quarterback Graham Mertz throws a pass during the first half of an NCAA college football game against Illinois Friday, Oct. 23, 2020, in Madison, Wis.

KANSAS CITY, Mo. — Wisconsin quarterback Graham Mertz will be sidelined for 21 days after a second positive COVID-19 test, according to multiple reports.

Making his first start for the ninth-ranked Badgers on Friday in the pandemic-delayed season opener, Mertz, a redshirt freshman from Blue Valley North, took college football by storm. He completed 20 of 21 passes for 248 yards with five touchdowns in a 45-7 rout against Illinois.

He tested positive one day later, according to reports over the weekend. Dennis Dodd of CBS Sports was the first to report Tuesday afternoon that Mertz had a second positive test, confirming the first and triggering a 21-day ban from Big Ten competition.

Per conference return-to-play protocols for COVID-19, Mertz must “undergo comprehensive cardiac testing to include labs and biomarkers, ECG, Echocardiogram and a Cardiac MRI” and be cleared by a cardiologist before he can play again.

Mertz won the 2018 Thomas A. Simone Award, given annually to the top high school football player in Kansas City, after a record-setting season with the Mustangs.

He threw for 4,008 yards and 51 touchdowns, a Kansas high school football record, as a senior at BV North, which reached the Class 6A state title game in back-to-back seasons led by Mertz, including the 2017 crown and a runner-up finish in 2018.

Citing confidentiality concerns, Badgers coach Paul Chryst has declined to comment on Mertz and Wolf with respect to a COVID-19 diagnosis, but Wisconsin issued a statement that said no players tested positive or reported symptoms prior to the Fighting Illini game.

Junior Danny Vanden Boom would be in line to start without Coan, Mertz and Wolf.

Wisconsin is scheduled to play at Nebraska, host Purdue and play at Michigan the next three Saturdays.