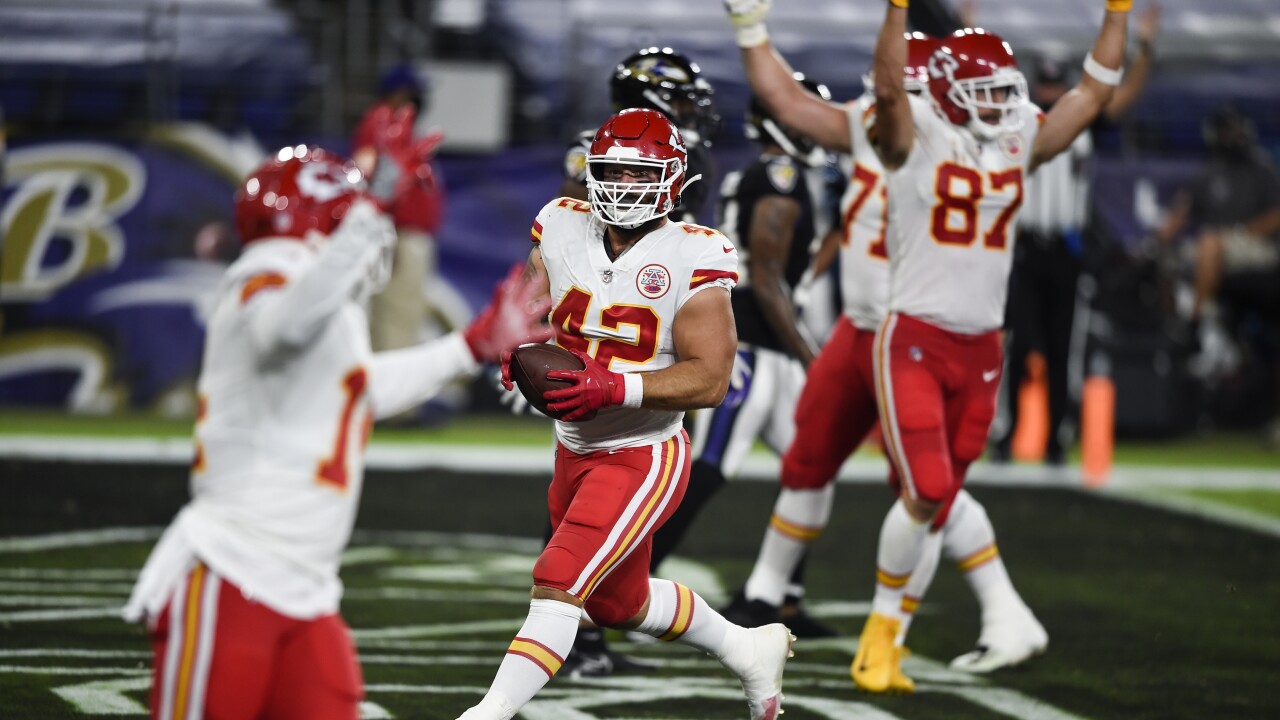 (Copyright 2020 The Associated Press. All rights reserved. This material may not be published, broadcast, rewritten or redistributed.)
Gail Burton/AP
Kansas City Chiefs running back Anthony Sherman (42) and teammates celebrate his touchdown after his pass reception during the first half of an NFL football game against the Baltimore Ravens, Monday, Sept. 28, 2020, in Baltimore.

Sherman was placed on the list, which the NFL created for players who test positive or have possibly been exposed to the virus, on Tuesday, according to ESPN’s Adam Schefter.

Chiefs FB Anthony Sherman was placed on the COVID-19 reserve list because he was exposed to someone who tested positive, not because of a positive test, a source tells @YahooSports. @AlbertBreer had that first.

Per NFL policy, Sherman must receive medical clearance to be reinstated from the reserve/COVID-19 list. He will be subject to increased testing and additional monitoring for possible symptoms by team medical personnel.

Based on a policy revision provided Monday to teams, Sherman won't be allowed at the Chiefs' facility for at least five days since his last close contact even if he never develops symptoms.

A major change to the NFL-NFLPA protocols distributed to clubs Monday: Anyone with "high risk" close contact exposure to a COVID-19 positive individual must be isolated for at least 5 days, even if the person is negative and remains asymptomatic. pic.twitter.com/VBYoFAKmWx

Sherman — who only has one catch this season, a 5-yard touchdown on a cheeky underhand shovel pass at Baltimore, and two carries for two yards — plays a key role on special teams for Kansas City.

The Chiefs’ next game is scheduled for 4 p.m. on Monday at the Buffalo Bills. The game was originally scheduled for Thursday night, but moved after the Bills' Week 5 game with the Tennessee Titans was postponed from Sunday to Tuesday.

So far, only one Chiefs player, practice squad quarterback Jordan Ta'amu , is known to have tested positive for COVID-19.

However, a strength and conditioning coach for the team reportedly tested positive last weekend.