Sock teams up to win doubles title at Wimbledon 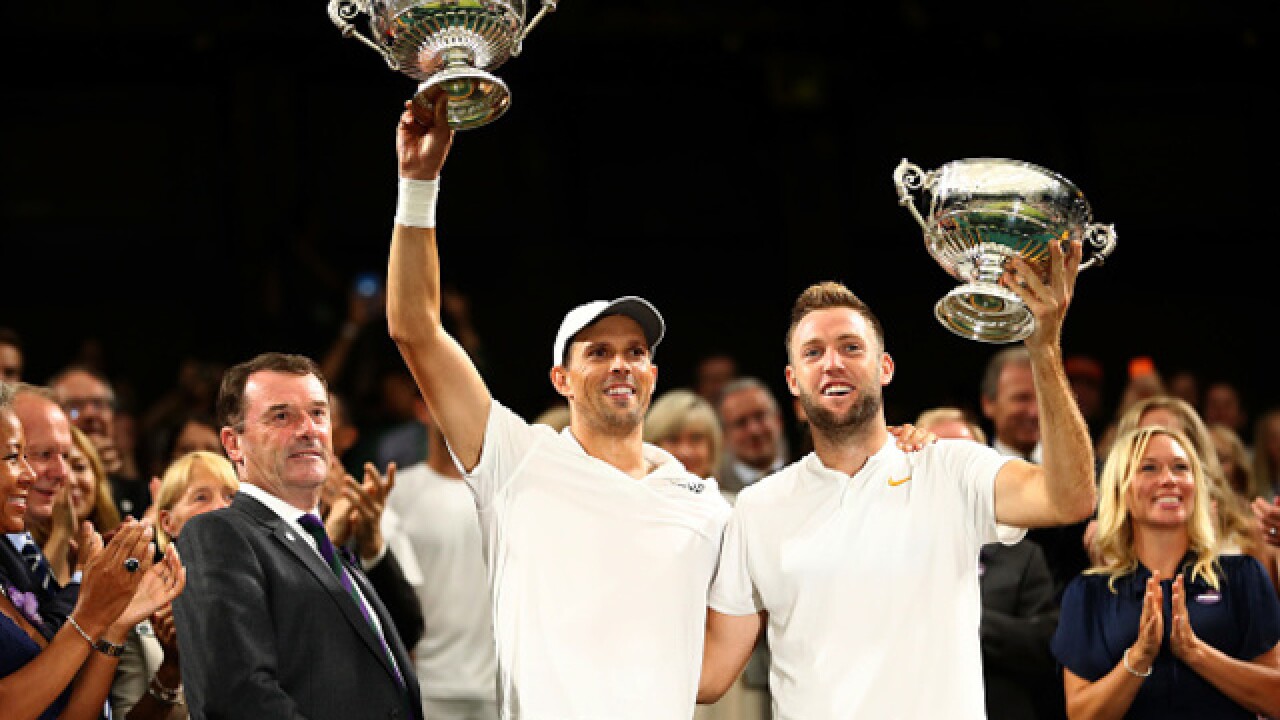 Copyright 2018 Scripps Media, Inc. All rights reserved. This material may not be published, broadcast, rewritten, or redistributed.
Michael Steele
<p>LONDON, ENGLAND - JULY 14: Mike Bryan and Jack Sock of The United States lift their trophies as they celebrate their victory against Raven Klaasen of South Africa and Michael Venus of New Zealand after the Men's Doubles final on day twelve of the Wimbledon Lawn Tennis Championships at All England Lawn Tennis and Croquet Club on July 14, 2018 in London, England. (Photo by Michael Steele/Getty Images)</p>

Mike Bryan  found himself a suitable backup partner for Wimbledon, and the result was a record-tying 17th Grand Slam men's doubles title -- and his first without his twin brother.

Bryan teamed with  Jack Sock  for only their second tournament together, and the American duo edged  Raven Klaasen  of South Africa and  Michael Venus  of New Zealand 6-3, 6-7 (7), 6-3, 5-7, 7-5 on Saturday night in the final at Centre Court.

He won his first 16 major championships, which included three others at Wimbledon, with his twin,  Bob Bryan , who is sidelined with a hip injury.

"I want to dedicate this title to him, because I'm sure he's watching on TV," Mike Bryan said in an interview with the BBC after the victory, mentioning that their grandfather died recently.

Sock also mentioned Bob Bryan in his postmatch remarks, saying: "The tour misses him. He's a legend and icon in tennis. I'm just filling in here for one of the greatest of all time."

This is Sock's second Wimbledon title. He paired with  Vasek Pospisil  to defeat the Bryans in the 2014 final.

"There was one guy I was going to play doubles with in this tournament, and it would be Mike Bryan, half of the greatest doubles team," Sock said.

The final lasted more than three hours and began with the retractable roof open but ended with it shut for the final set.

When Klaasen and Venus -- who were trying to win their first Grand Slam title -- held a set point in the fourth, Bryan was called for a foot fault on a second serve. That meant he double-faulted, giving the set away and forcing a fifth.

There were about 20 minutes of daylight left, and Sock said: "I'm good to call it for the night. I can't see."

The decision was made to close the dome and turn on the artificial lights so the match could continue to its conclusion.

The key break came with Klaasen serving at 5-all, when he pushed a volley long after Sock sent a big forehand right at him. Bryan then served out the victory.

John Newcombe is the only other man in tennis history with 17 Grand Slam doubles trophies. The most he won with one partner was 12, though. The Bryans' 16 as a pair is a record.

They had played doubles with each other in a record 76 consecutive major tournaments until Bob Bryan missed the French Open in May.

Mike Bryan entered Roland Garros with  Sam Querrey , and they lost in the first round.

Bryan then played a grass-court tuneup with Sock last month, their only event before Wimbledon.

"It feels like we're getting better every match," Mike Bryan said. "We're starting to jell. If Bob can't come back, we'll play this summer."