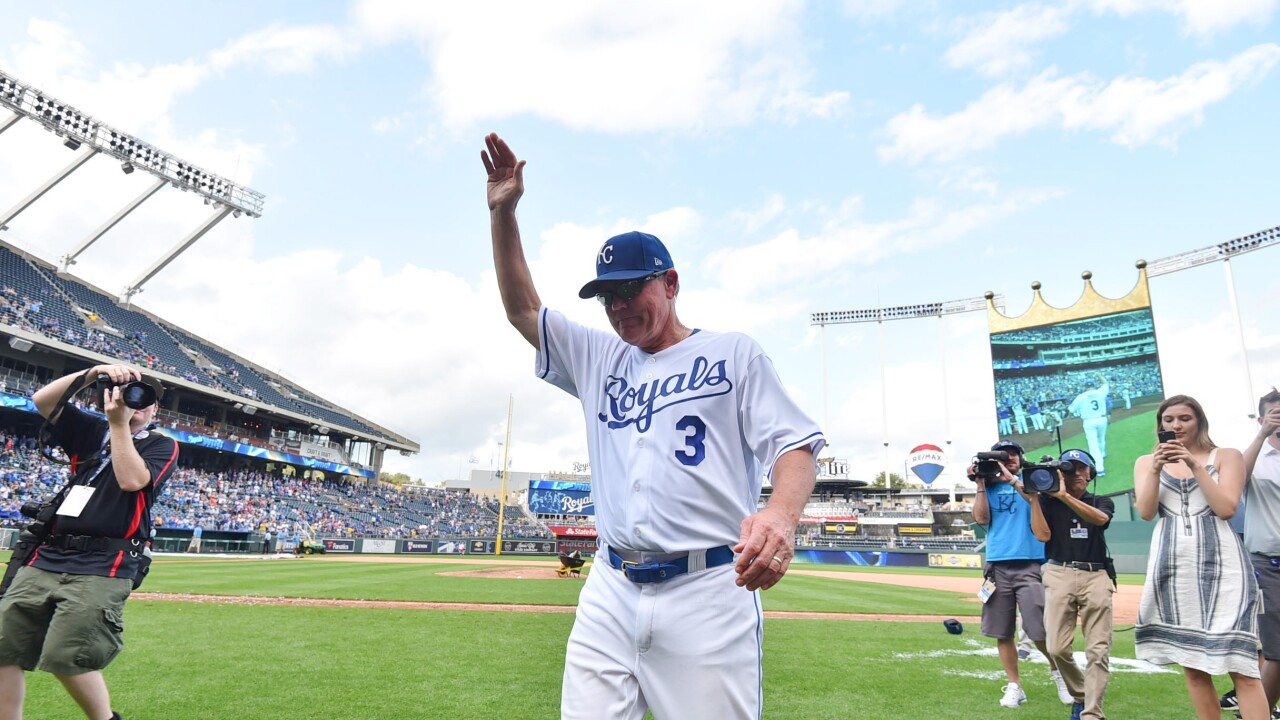 Copyright 2019 by Getty Images
Ed Zurga/Getty Images
KANSAS CITY, MISSOURI - SEPTEMBER 29: Manager Ned Yost #3 of the Kansas City Royals waves to the crowd as he leaves the field for the last time following their 5-4 win against the Minnesota Twins at Kauffman Stadium on September 29, 2019 in Kansas City, Missouri. It was Yost's final game as he is retiring as manager of the team. (Photo by Ed Zurga/Getty Images)

Phillips' first career walk-off RBI gave Yost a celebratory send-off on the final day of the regular season. Yost finished 746-839 over 10 seasons leading Kansas City, by far the most wins in franchise history.

Twins manager Rocco Baldelli turned over coaching duties to infielder Ehire Adrianza because he thinks he has the makings of a future manager. Adrianza filled out the lineup card and called the shots during the game. Minnesota finished the season 101-61, one victory shy of the franchise record set in 1965.

Soler connected in the first inning and broke a tie with Rafael Palmeiro for most home runs in a season by a Cuban-born player. The 27-year-old Soler's previous career high was 12.

Ian Kennedy (3-2) pitched a scoreless ninth before the Royals rallied against rookie Brusdar Graterol (1-1). Humberto Arteaga led off with a double, and Nick Dini moved him to third with a bloop single, setting up Phillips' fly to right that lifted the Royals to 59-103.

Kansas City's Hunter Dozier led off the eighth with his 10th triple of the season, matching teammates Whit Merrifield and Adalberto Mondesi for the AL lead. It marks the first time since 1984 (Astros) that a team has had three players with at least 10 triples. Dozier scored on Ryan O'Hearn's tying double.

The AL Central-winning Twins scored three runs in the first on back-to-back home runs by C.J. Cron --a two-run shot -- and Jake Cave. It's the 12th time this season the Twins have homered back-to-back. Jason Castro added a solo shot in the fifth.

Twins Minnesota is uncertain if rookie 3B Luis Arraez will be ready for the AL Division Series after spraining his right ankle Saturday. "It could be a few days, it could be a week," said head athletic trainer Tony Leo. "We're not really putting a timeline on this one, obviously, with where we are." Arraez is hitting .334 in 92 games.

The Twins will have a few days off before opening their ALDS in New York on Friday. Baldelli has not named any starters for the ALDS.