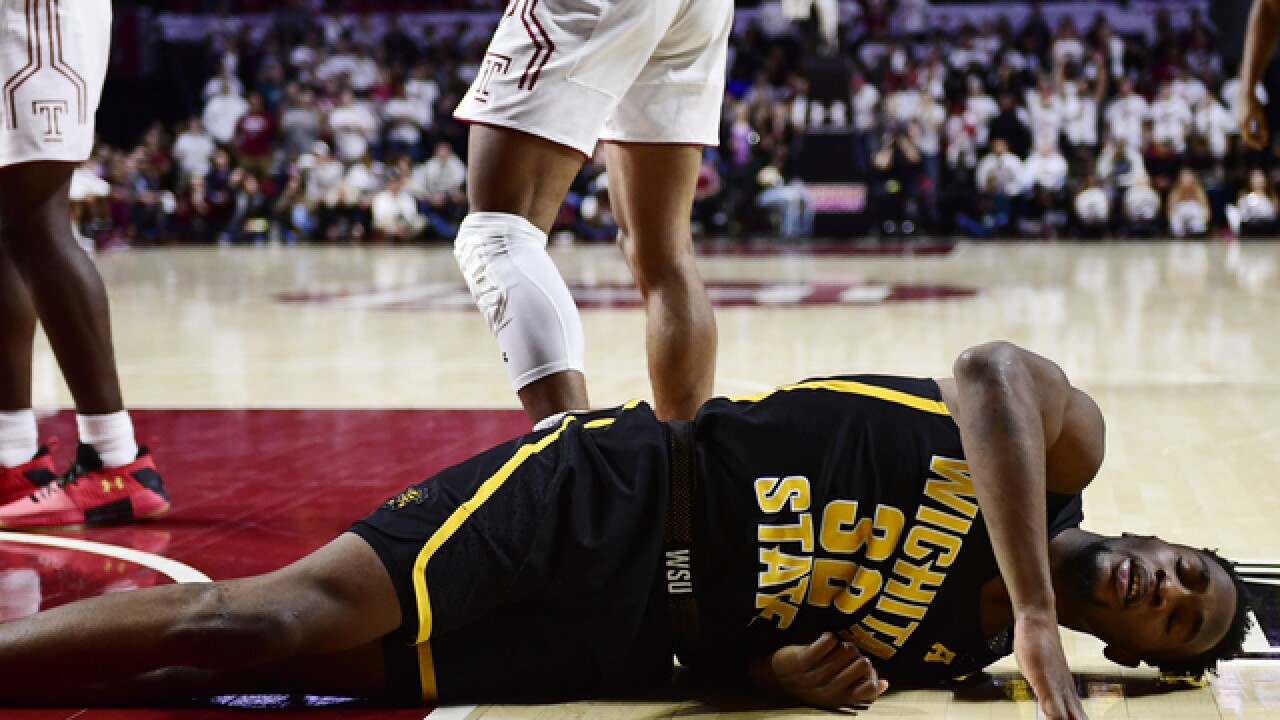 Copyright 2018 Scripps Media, Inc. All rights reserved. This material may not be published, broadcast, rewritten, or redistributed.
Corey Perrine
<p>PHILADELPHIA, PA - FEBRUARY 01: Markis McDuffie #32 of the Wichita State Shockers hits the floor against the Temple Owls during the second half at the Liacouras Center on February 1, 2018 in Philadelphia, Pennsylvania. Temple defeated 16th ranked Wichita 81-79 in overtime. (Photo by Corey Perrine/Getty Images)</p>

Obi Enechionyia hit two free throws with 18.1 seconds left in overtime, and Temple handed the 16th-ranked Shockers their third loss in five games with an 81-79 victory on Thursday night.

"There's a lot of travel in this league. It's a hard league," Temple coach Fran Dunphy said. "There's some really good teams, terrific coaching that goes on, outstanding talent. You have to try to hold your end of the bargain at home."

Moving from the Missouri Valley Conference, Wichita State is playing new teams in unfamiliar arenas and getting its opponents' best shot.

How much did it mean to Temple to knock off a ranked opponent for the 11th straight year? Fans stormed the court after Markis McDuffie's 3-point shot clanged off the rim and the ball caromed into the backcourt as time expired.

"It's a game we feel like we could have won and maybe should have won," Shockers coach Gregg Marshall said. "We had some good looks."

Shizz Alston Jr. shook off a poor shooting performance to score 12 points, including the tying bucket at the end of regulation.

"They're a great team, well-coached and have a lot of guys that can shoot and make plays," Alston said. "I think we were just tougher tonight."

Dunphy joked that he wanted to run on the floor and stop Rose from shooting a 3 after Nate Pierre-Louis rebounded Alston's miss with 21 seconds remaining and the score tied.

But after Rose missed, Enechionyia was fouled by Shamet in the scramble for the rebound. He calmly made both shots and soon the Owls were swarmed by celebrating students.

The Owls earned another big win alongside upsets of Clemson and Auburn.

"To get a win like his against a team that has that kind of cache to it, it's good," Dunphy said.

Shaquille Morris had 24 points and nine rebounds and Austin Reaves added 20 points for the Shockers (17-5, 7-3).

Alston, who was just 5 of 22 from the field, made a driving layup in traffic with 6.8 seconds left in regulation. Zach Brown then missed a corner 3 for Wichita State as time expired.

The Shockers led by as many as 12 points in first half, but nine second-half turnovers and Temple's inspired play produced a comeback.

Temple entered with an odd resume -- just a game above .500, yet ranked No. 44 in the RPI thanks to a brutal schedule and wins over Auburn and Clemson.

The Owls frustrated the Shockers despite Morris' big night. The rugged big man eclipsed 1,000 career points in the second half and his dunk with 2:19 left in overtime made it 79-74.

Wichita State, which tumbled in the rankings after consecutive losses to conference foes SMU and Houston, didn't score again.

"We turned it over too much," Marshall said. "We had careless passes in the second half."

Wichita State: The Shockers are learning tough lessons in their first season in the AAC. Too many turnovers (16, with 10 after halftime) and 1-of-10 shooting from 3-point range in the second half were too much to overcome.

Temple: The record doesn't show it, but the Owls can make a case for the NCAA Tournament thanks to their tough schedule, strong RPI and big wins. A strong finish would put them in consideration despite the 10 losses.

McDuffie scored 11 points as his sister sat behind the opposing bench. Sierra is in her second season as a graduate manager for Temple. She played basketball at Division II Felician in New Jersey.

Temple at halftime honored the Mark Macon-led team that reached the East Region final 30 years ago before falling to Duke.

Temple: At Tulane on Sunday.