The hidden danger at gun ranges: People could be getting lead poisoning and not have a clue 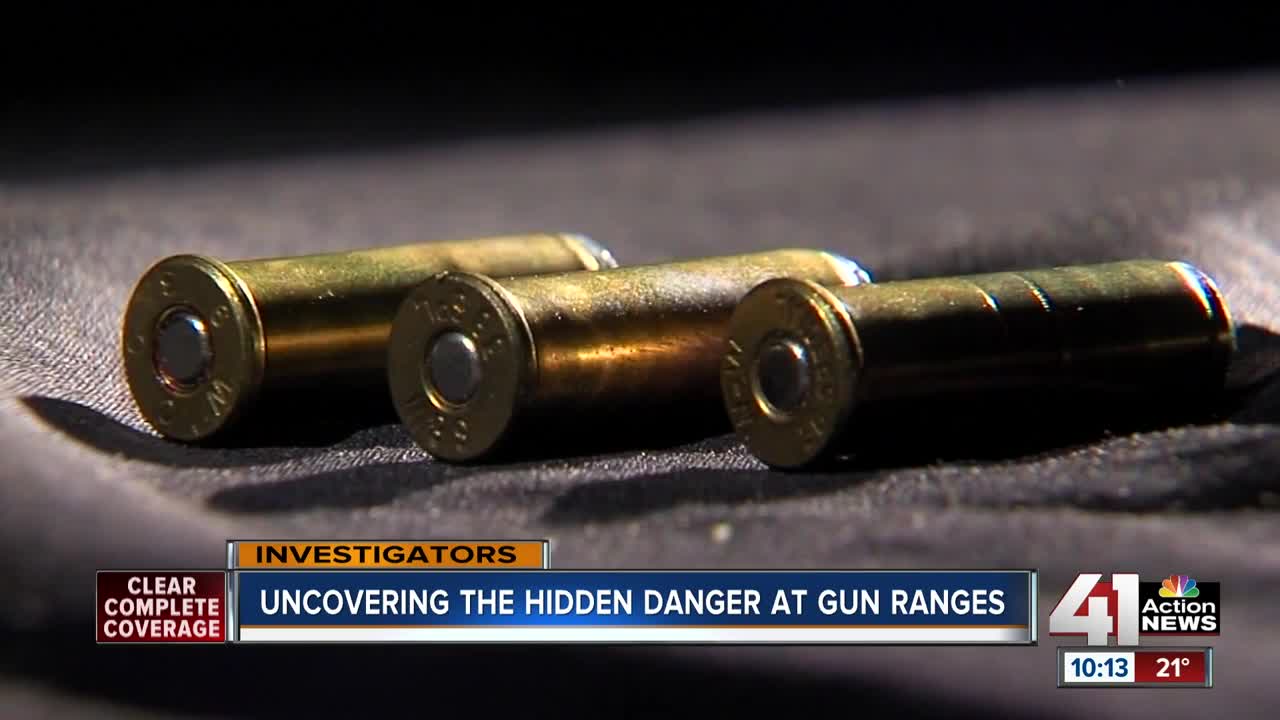 When you hear the words "lead poisoning," you might think about old paint or bad water pipes. But what about gun ranges? This is a hidden danger and the very agency that's supposed to protect you has done very little. 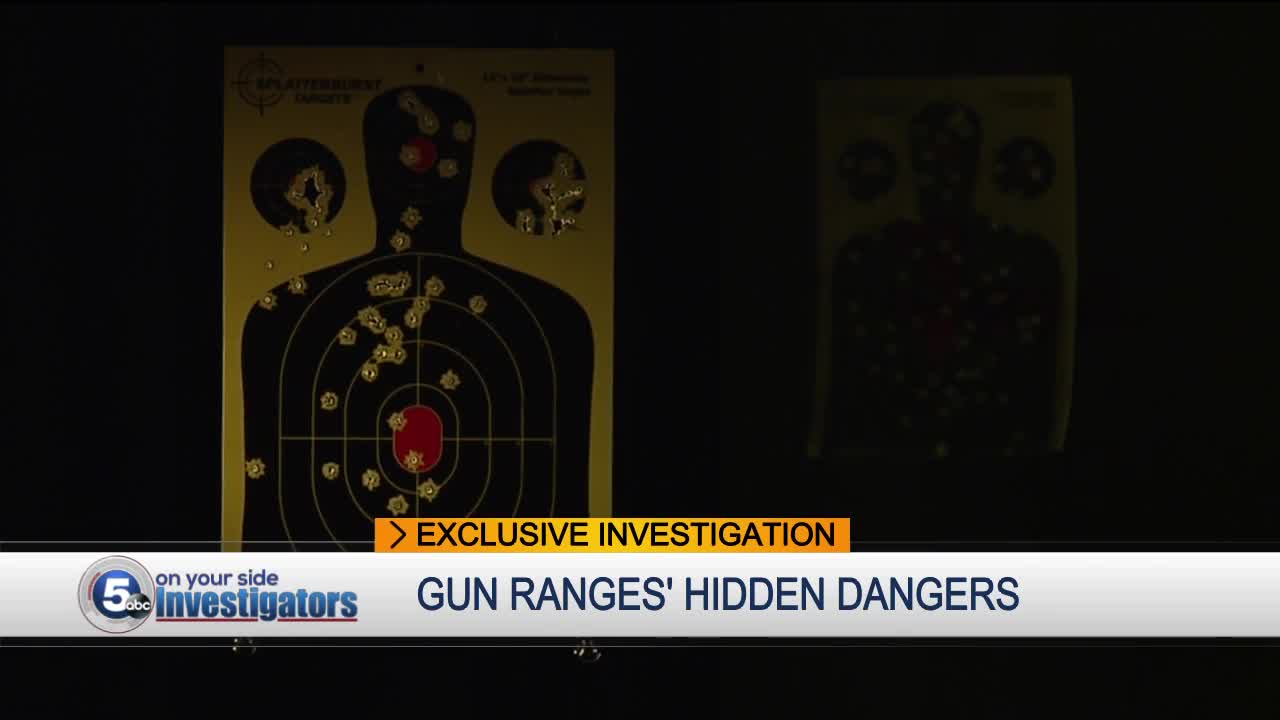 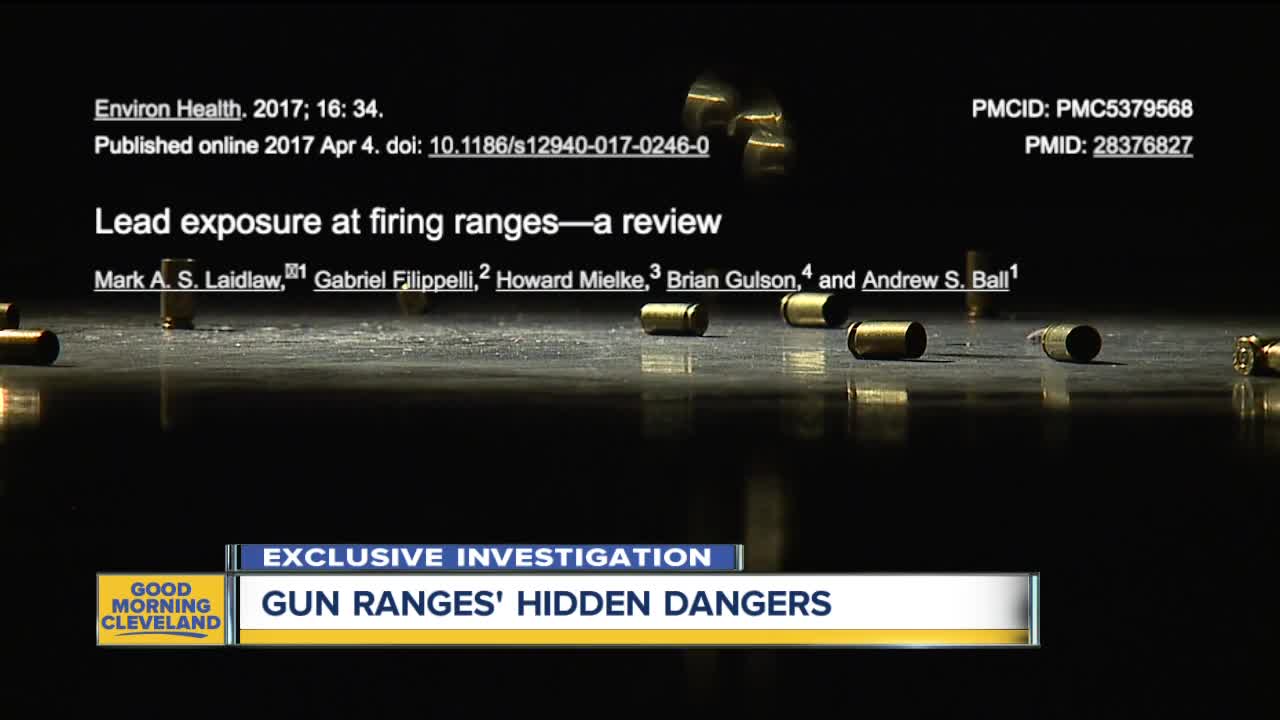 When you hear the words "lead poisoning," you might think about old paint or bad water pipes. But what about gun ranges? This is a hidden danger and the very agency that's supposed to protect you has done very little.

"A job came open that seemed to be a good fit for me,” said Don Haines from northeast Ohio. He has a background in law enforcement so, a local gun range hired him. “My best fit would be to be the Range Safety Officer,” he added.

Haines told us sometimes he was at the range six or seven days a week for hours at a time. It all had an impact.

"My friend noticed some changes in me,” Haines said. “I was complaining about being tired all the time and would come home and not even bother to eat sometimes. She noticed that there was some irritability and some difficulty understanding some things when we were having discussions. And, normally, I'm pretty sharp on stuff.”

Doctors told Haines he was poisoned by lead and it was dangerous. “I would be driving up the highway and it's like it was almost physically difficult to keep my eyes open,” Haines recalled.

Our investigation into Haines’ problem led us to Doctor Gabriel Filippelli from Urban Health at IUPUI in Indianapolis. "Current lead contamination still has tremendous impacts to a bunch of different sectors,” said Filippelli.

In general, he said here's what happens at ranges. As people shoot, lead particles are left behind on the walls, counters and floors. Plus, many times the primer used as padding to eject the bullet is made of lead that bursts into the air. "You have to remember that the primer is exploding right by people's faces, particularly if they're using rifles." 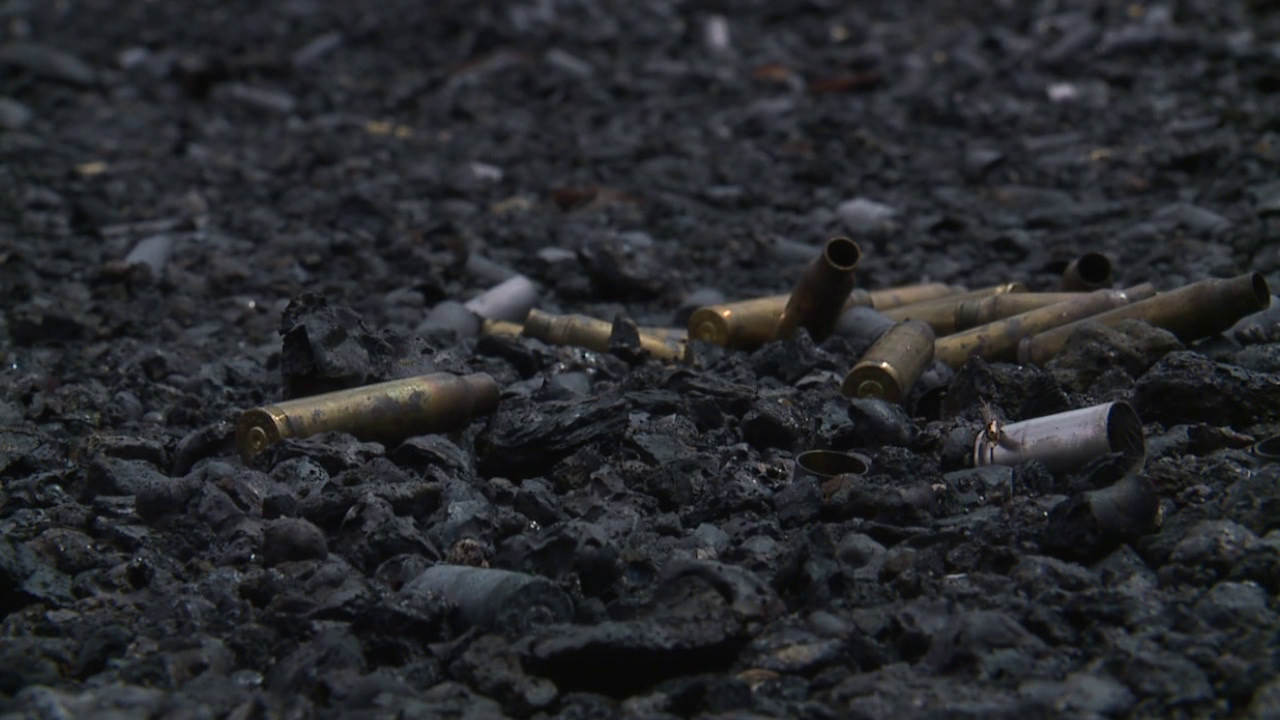 Doctor Filippelli lent his talents to a national study of blood lead levels in people at gun ranges. He and his colleagues looked at dozens of studies. They found lead levels ranging from 10, to 20, to even more than 40 micrograms per deciliter. "It's really hard to find a single study of someone who uses a firing range that said, ‘Oh, no. They're completely fine,’” said Filippelli.

Here are the numbers. Medical experts from the National Institute of Environmental Health Sciences said "no amount of lead is safe" in your body because even a level of 10 can cause significant problems for kidneys, blood pressure, and the nervous system.

But, the federal Occupational Safety and Health Administration , or OSHA, is in charge of inspecting gun ranges and lead levels in 28 states, including Ohio. It said people can still work their jobs when their blood lead level is 40. 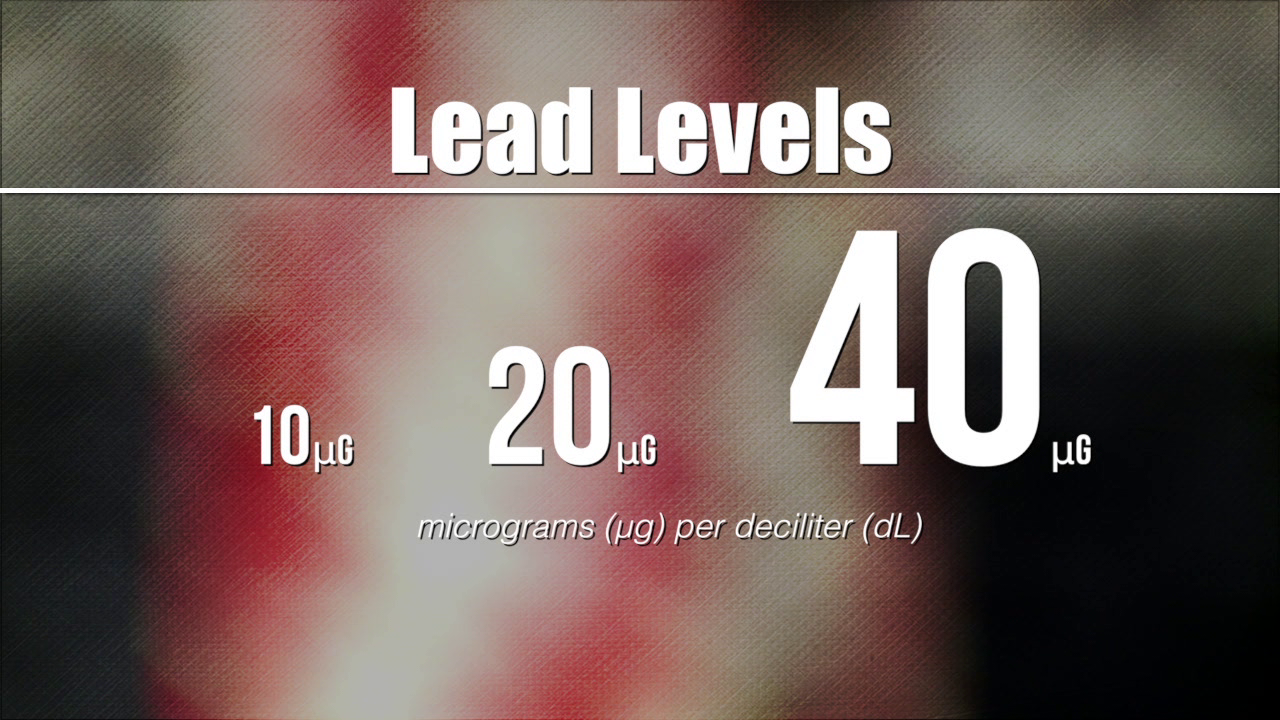 "(That) is well over what we now think causes reproductive effects, which is 25,” said Pete Dell. He’s the President of the Dell Group based out of Mentor. He's been helping businesses and agencies mitigate lead problems for the past couple decades.

He told us decades ago the so-called “safe” levels were much higher than they are now. “One of the scariest things about these ‘safe’ levels that we get from HUD, from EPA, from OSHA is they're always dropping,” he said. Meaning who knows what kind of damage was left behind by allowing businesses and policies to have higher, more damaging levels back then.

Filippelli, too, said the "safe" levels are out of whack. "These levels are so high, that they're starting to have impacts on the adults...including things like depression, suicidal thoughts, aggression…" said Filippelli.

In fact, remember Haines? When he was first hired, the gun range checked his blood lead level. It was at three micrograms per deciliter, but just eight months later, it was drastically different. “It had jumped from a 3 to a 60,” he said.

According to five years worth of data, OSHA only conducted 222 inspections. That’s just a small fraction of the thousands of ranges it's responsible for across the country.

"Is it time for OSHA to do more?” we asked Dell.

“Well, it's always time for OSHA to do more,” he told us.

"I would argue that they're not doing enough,” Filippelli said.

We asked OSHA multiple times for an on-camera interview. It refused. In a statement, though, OSHA revealed it might finally be more open to lead-experts' concerns and doing more to protect people. OSHA cites numerous experts saying levels in adults should be less than 10. And it's "…exploring regulatory options to lower blood leads in affected workers."

“The Occupational and Safety Administration is working diligently to protect America’s workers. OSHA is actively exploring regulatory action to strengthen the standards for blood lead levels in affected workers, as noted in an announcement made this past fall. In fact, yesterday OSHA cited an indoor gun range for penalties totaling $214,387. OSHA also notified the public health department to alert customers about the elevated lead levels in this range.

"In addition, the agency recently updated a QuickCard to educate workers and employers on protecting themselves from hazards of lead in indoor firing ranges.

Enforcement plays an important part in OSHA’s efforts to reduce workplace injuries, illnesses, and fatalities. All complaints made to OSHA will be investigated, and employees may request anonymity when they file complaints. The agency seeks to focus its inspection resources on the most hazardous workplaces in the following order of priority: Imminent danger situations, Severe injuries and illnesses, Worker Complaints, Referrals, Targeted Inspections, and Follow-Up Inspections. For more details, please see OSHA’s Fact Sheet on Inspections.

"It is important to note that federal OSHA does not have jurisdiction in all 50 states as 22 States have taken delegation of this responsibility. State Plans are OSHA-approved workplace safety and health programs operated by individual states or U.S. territories.”

While that bureaucratic process slowly churns, it's important to note OSHA only did 15 inspections of ranges in all of Ohio in the five years we checked.

The highest fine was against Pro Armament in Cuyahoga Falls that used to own a range in addition to a gun shop. The range had problems with lead. The initial fines were more than $80,000. Just recently, it was negotiated down to $23,000.

We went to Pro Armament and, despite that visit, phone calls and emails, we heard nothing back.

Businesses can protect you if they have the proper air filtration system with air blowing away from you and towards the targets. 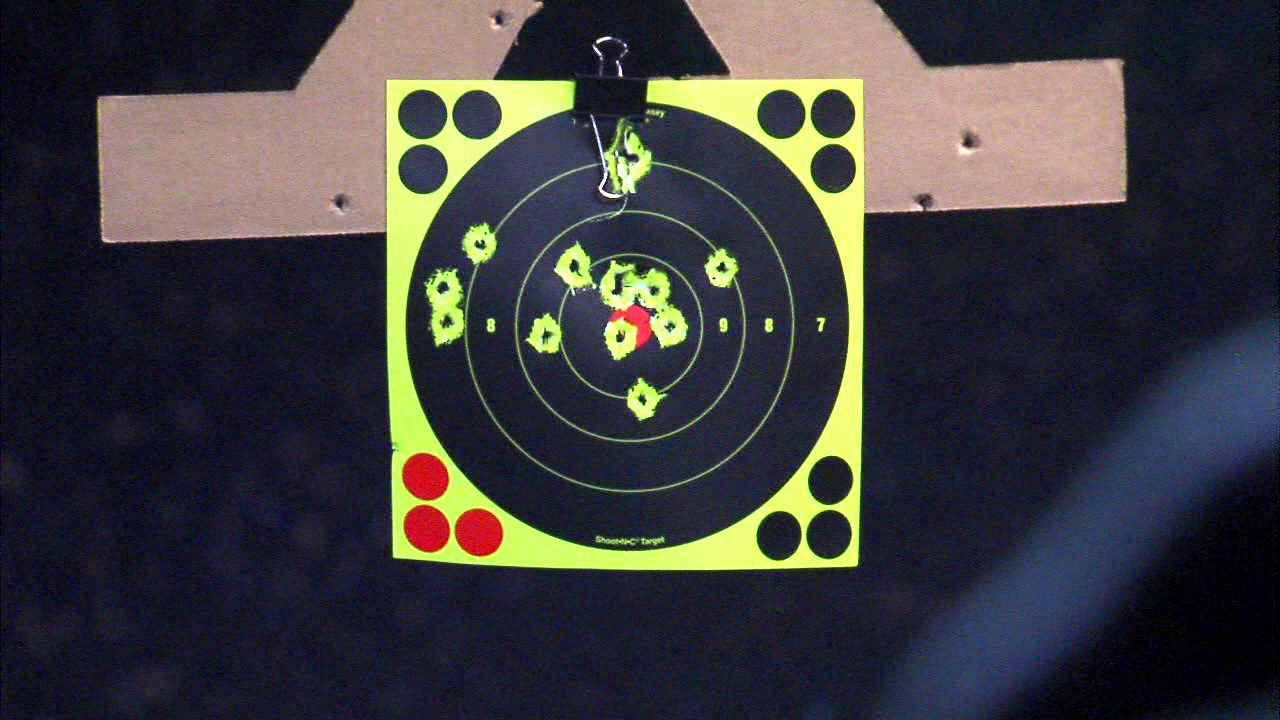 Our experts said you can protect yourself by wearing masks when you shoot or work in a range. Wear gloves while firing or cleaning up, and don't wash the clothes you shoot in with other clothing. “That's going to contaminate the laundry equipment at home, the rest of the family's clothes,” said Dell. “You don't want your toddler playing with your work boots that you spent all day with lead dust on them."

Filippelli said he wants to give you, businesses and government agencies information about protection and possible consequences. "It doesn't matter if the range was an indoor range or outdoor range," he told us. "Oddly, the amount of lead poisoning that we saw was very similar... we would like to see this nudging OSHA to change [its] policy. We'd also like to see it nudging at least firing ranges to, at least, move away from lead projectiles and lead primer. There are other options,” said Filippelli.

Haines didn't know about the dangers, and he was hired to be a Range Safety Officer, of all things, to help other shooters. "They could go for years and they may not recognize any symptoms,” said Haines. Had I not had someone who was observant, I probably would not have attached it to the lead."

That state of Michigan just lowered its lead level threshold . Workers may not return to work unless their levels are 15 or lower.