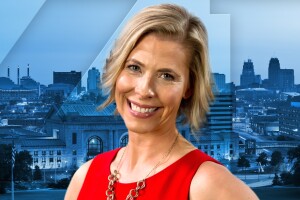 Caitlin started at KSHB in June 2020 and came to us from Central Illinois where she was an evening anchor at WEEK. But don't let the small market size fool you, she has big market experience, having also anchored and reported for WTVD in Raleigh/Durham, NC for 6 years.

In addition to being a trusted news source for viewers as an anchor, she also specializes in breaking news, investigative stories, and special reports. Caitlin also maintains a strong presence online via social media outlets that include Facebook, Twitter, and Instagram. Highlights of her career include reporting live from the John Edwards trial in Greensboro, NC, reporting live from the coast during Hurricane Irene, and interviewing President Barack Obama and reporting from his campaign headquarters in Des Moines, IA the night he won the 2008 Iowa Caucus. She is a regional Edward R. Murrow and Emmy award winner.
In her spare time, Caitlin enjoys giving back to her community. Over the years she's served in a number of roles, including coaching high school softball, volunteering with Big Brothers, Big Sisters, and working as a mentor with The Queen's Foundation.