The jewel of a park can be found in the south KC neighborhood Verona Hills, off Minor Drive and Pennsylvania Avenue.

It features a scenic lake for fishing — no boating, swimming or skating allowed.

Little ones can romp around the playground while adults chat at the picnic tables.

If leisure isn’t your reason for attending, you can work out on several pieces of exercise equipment, or do laps on the walking trail that’s just under half a mile long.

The land the park is built on has a long history.

In 1854, Marcus Gill purchased a thousand-acre farm in what would become part of Kansas City, Missouri. It bordered New Santa Fe village and State Line Road. 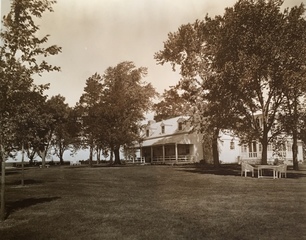 Two of Gill’s sons fought for the Confederate Army in the Civil War, one of whom would go on to be twice-elected mayor of KCMO.

Gill’s descendants lived on the farmstead until 1959, when much of the land was sold for residential use, and 12 acres became Migliazzo Park.

One of those descendants, Marcus Gill’s great-grandson Allen Burr Harrison McGee IV (he goes by Burr), shared some memories of growing up on the land with 41 Action News:

“It is where I grew up and we used to swim in the lake. There was a sand beach at the west end of the dam. My father trucked in the sand.  I can remember many a fun summer going into the lake from the ‘beach’… It was like being at the ocean. There used to be an island on the lake that was removed some years ago, and we had a rowboat that we used to navigate around in. The cove at the northeast end of the lake used to be a fun place to take the boat, and we could imagine ‘pirates’ that might attack at any time.

There are four of us brothers and we were very fortunate to have been able to grow up on the farm and enjoy the outdoors.  We had horses which we used to ride a lot. We even played ‘cowboys’ on horseback.

Our father was in the cattle business so livestock was always in evidence.”

The lake Burr wrote of was built in 1933. His brother, John McGee, shared this photo of the construction with 41 Action News: 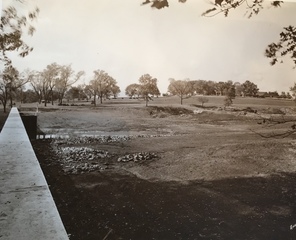 The park, which used to be known as Verona Park, is named after Carl Migliazzo, a former member of the Board of Parks and Recreation commissioners.

Old newspaper articles and minutes from city meetings show Migliazzo had a great love for the parks and boulevards system in Kansas City and didn’t live far from the park that would come to bear his name.

The archivist for KC Parks and Rec said parks and boulevards have been named in the past to honor people who made significant contributions to Kansas City and its residents, or who have performed notable deeds or accomplishments.

And, according to an article from the time, Migliazzo fit many of these standards. In addition to his involvement with the parks department, he was also on the board of the Truman Medical Center, the president of Kansas City Community Blood Center, the director of Kansas City Hospital Association, and a member of City of Fountains board.

For even more information on the land’s history, read this article from the Martin City Telegraph.