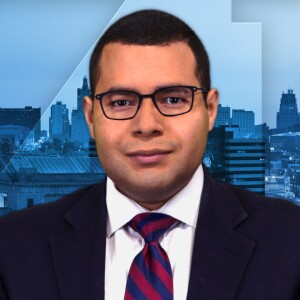 KANSAS CITY, Mo. — As gunshots rang out on the Country Club Plaza during the lunch rush on Tuesday, a hectic scene inside Shake Shack sent customers running out the back.

Katie Antrainer and Evan Barclay had just placed their order at the counter when they heard five gunshots.

"So at first I just kind of slumped into my seat just trying to protect my head, then I saw people running from the door toward the back," Barclay said.

In the chaos, Shake Shack employees led customers to safety.

"Everyone was kind of directing down the back staircase and through the construction zone out of the other side of the street. It’s strange, you never expect this to happen," Barclay said.

Once they were out of the restaurant, Antrainer and Barclay watched the investigation unravel with others in the crowd.

"We parked in one of the parking garages, so we were just waiting until that was over with," Antrainer said.

The suspects ran right past Topsy’s on Central Street.

“I stood there and watched them. The kid was running saying 'Go! Go! Go!' and they ran right past me," said Rhonda Lake, a Topsy's employee. "I could’ve grabbed them but they took off and went out that way and I heard people yelling and screaming."

Police took Lake’s statement while a manager of the Shake Shack stood next to her and helped police identify the suspects — at least one of them a former employee of the restaurant.

“He said him and a couple of his employees identified him and knew who it was. Sounds to me like it was a targeting because he got fired or some isolated incident,” Lake said.

Police took one person into custody shortly after the incident, which occurred near Shake Shack at 47th Street and Wornall Road. After about three hours, police located a second suspect in a parking garage and said they were not looking for anyone else.

Tuesday was the third time that Antrainer and Barclay had visited the fast-food joint, which has been open for 40 days.

"It's not really something you expect,” Barclay said. “It’s frightening for sure.”

Antrainer agreed that it was a scary situation.

"I'm just scared as what could have happened. Luckily, no one got hurt," Antrainer said. "I just can't imagine if somebody had gotten hurt."

The lunchtime shooting sent many people near the Shake Shack scrambling for cover. Chris Williams had just sat some diners at the Classic Cup Cafe when gunfire erupted across the street.

“It’s crazy,” said Williams, a host at the Classic Cup. “I mean it’s the Plaza — noon on a Tuesday — nobody expected anything like this.”

“We thank the KCPD for helping us secure the Plaza and ensure our shoppers were safe, and for bringing this to a peaceful resolution.”