Kansas City attorney shot, killed in front of his Brookside home after walking kids to school 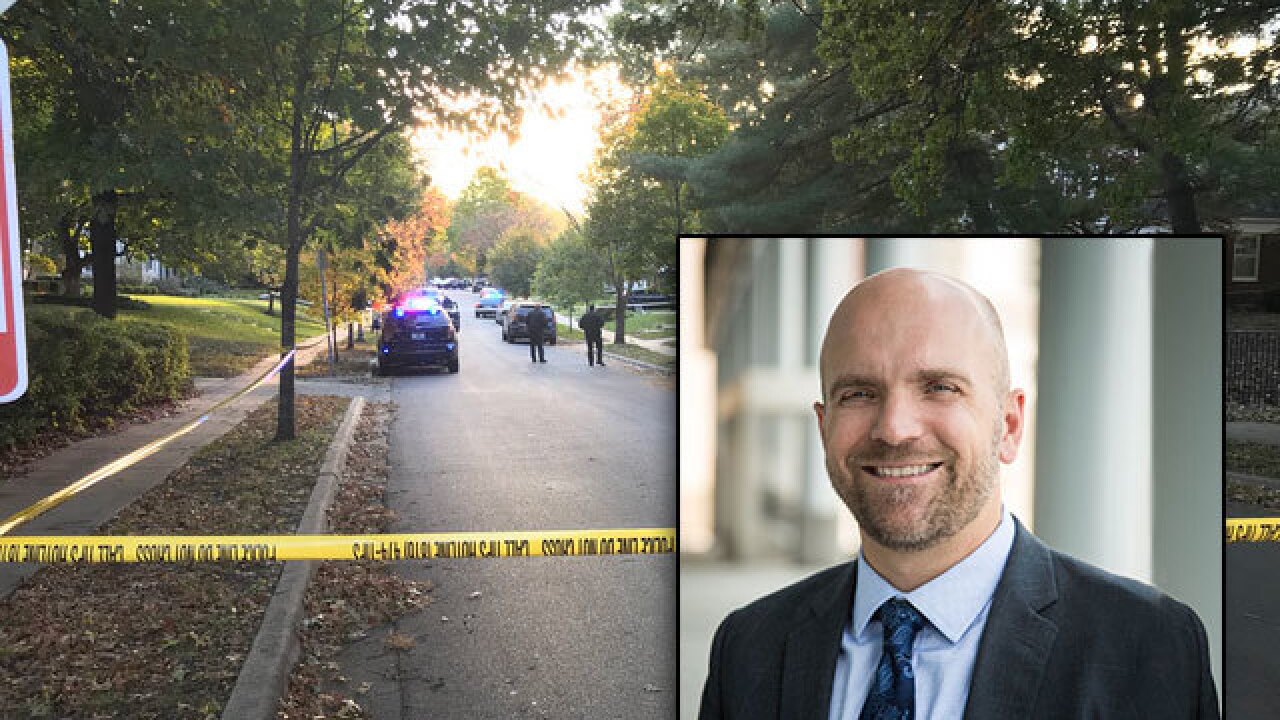 KANSAS CITY, Mo. — A well-known Kansas City lawyer was shot and killed in his front yard Wednesday morning, just moments after he returned from walking his children to school, according to police and neighbors familiar with the scene.

Police have not named a suspect.

KCPD has not released the victim's identity, but 41 Action News has confirmed with friends of the family that the victim is Thomas Pickert, a lawyer at Fowler Pickert Eisenmenger, LLC. Jackson County Prosecutor Jean Peters Baker also confirmed Pickert's death in a tweet Thursday morning.

Police have worked around the clock to gather evidence on the brazen murder of Tom Pickert killed yesterday. Your help is needed. Plz call.

Pickert was shot and killed in his front yard near Main Street and West 66th Terrace in the Brookside area. Neighbors said he had just walked his two sons to school. Police said that's when Pickert's wife heard a gunshot, went outside and discovered her husband in front of the house.

“This is a very difficult thing to have to face,” said neighbor David Wesley, who was walking his dog along 66th Terrace. "I trust and hope this community here will gather around them."

Immediately after the shooting, KCPD said they were looking for a white Chevrolet van. Officers found it unoccupied in Raytown just before midnight on Wednesday night.

On Thursday morning police said they have talked to the owner of the van, although they would not name the owner. But Missouri state records show its license plates are registered to David Jungerman, a defendant in a civil lawsuit Pickert and his firm recently won.

The lawsuit was filed in regard to a 2012 shooting. Two homeless men broke into Jungerman's business and were believed to have been trying to steal copper. A silent alarm went off and Jungerman went to the building armed with an AK-47 and shot both men.

One of the men, Jeffery Harris, sued Jungerman and won. In August, Jungerman was ordered to pay Harris $5.75 million in damages.

According to court records, Jungerman was served with documents Tuesday pertaining to the sale of his property in order to pay off the lawsuit's debt.

Police have not named Jungerman -- or anyone else -- as a person of interest or a suspect in Wednesday's shooting, but they're not ruling him out.

She also said detectives are working around the clock on the case.

For the better part of Wednesday evening, police focused their investigation at a cul-de-sac on 60th terrace in Raytown near Jungerman's home.

Pickert graduated from the KU Law School in 2004.

“KCMBA mourns with the Kansas City legal community over the sudden and untimely death of Tom Pickert. We lost a thoughtful and kind advocate this morning.”

His wife works for the KU Health System, which issued a statement of support Wednesday.

"We learned earlier today that the husband of a physician at The University of Kansas Health System was killed as the result of a violent crime. We are a family at The University of Kansas Health System, and we are stunned and saddened. Right now our thoughts are with this doctor, her family, and all those close to her. We offer our support for our co-worker  and her family today and in the days and weeks ahead."  Jill Chadwick, Health System, Spokesperson

A doctor who knows Pickert’s wife said they both are good people.

“We are deeply saddened, shocked, stunned. We don't have much information at the time, but we are standing by and ready to support her and for the family,” said Dr. Tim Williamson, with the KU Health System.

Pickert's wife has named Jill Chadwick of The University of Kansas Health System as her spokesperson for the time being.

In a news conference Thursday, Chadwick said the family just wants privacy right now, but will answer questions in the future.

"She also told me 'I wanted to tell Tom's story.' She goes, 'I want everyone to know what kind of person he was and what he means to our family.' But she said 'I just  don't have a capacity to do it now,'" Chadwick said.

Watch the full conference below.

The tragic shooting that claimed the life of 39-year-old Pickert brought shock around the metro on Wednesday, including for fellow attorneys.

Pickert's office was on lockdown early Wednesday, and an attorney involved in representing the other homeless man involved in the 2012 shooting took similar security measures.

Hours after the shooting on Wednesday, attorney Matthew O’Connor said the crime brought a concerning reminder for lawyers.

“What it points out is that lawyers are like everybody else,” he explained. “They're equally as subject to these intense violent outbursts."

As a lawyer for the last 20 years, O’Connor told 41 Action News that civil cases can bring high stakes and put attorneys close to people with a lot to lose.

“You've got people who are subject to losing their freedom, losing large amounts of money, losing their children,” he explained. “You've got high emotions and high-conflict cases. Emotions boil over."

As a result of frequently working in cases with high stakes, O’Connor said it can be easy for attorneys to lose track of how dangerous the profession can be.

“What we do every day is deal with high-conflict resolution. Unfortunately, you become accustomed to it in some ways,” he explained. “You can't predict how the other party is going to react."

“You can't let violence be a deterrent to doing what you think is right,” he explained.