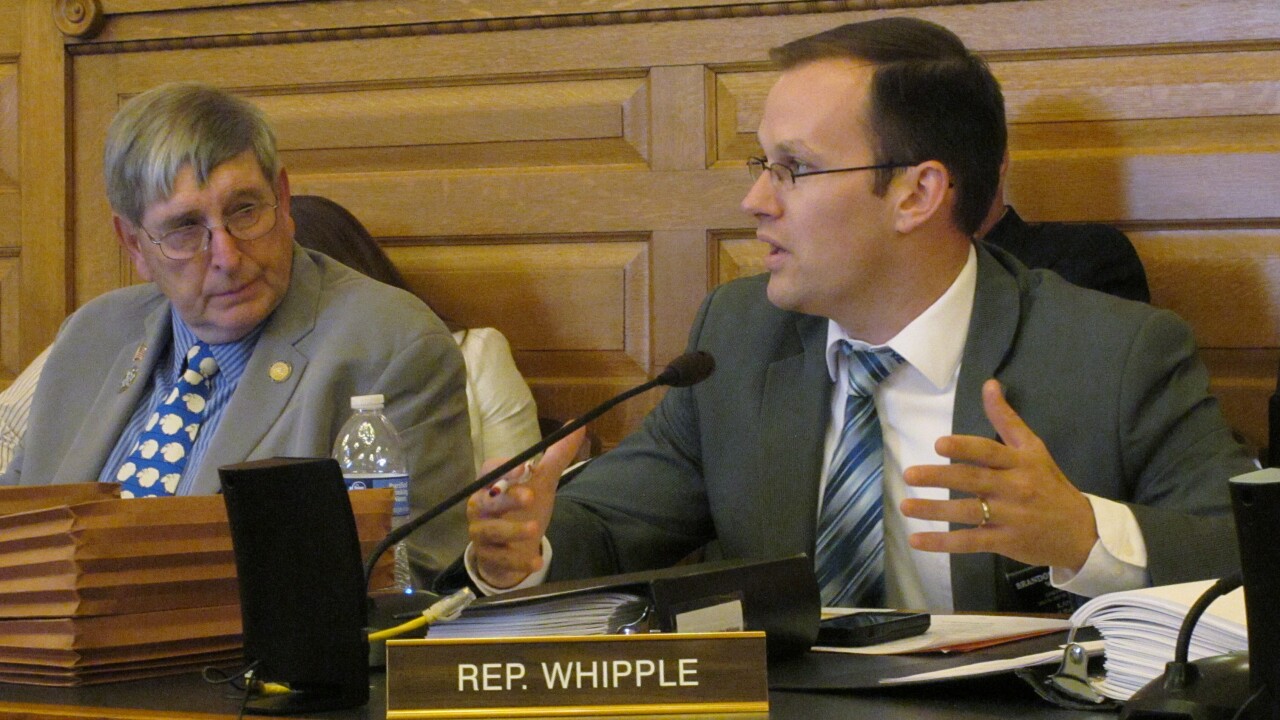 (Copyright 2020 The Associated Press. All rights reserved. This material may not be published, broadcast, rewritten or redistributed.)
John Hanna/AP
Kansas state Rep. Brandon Whipple, right, a Wichita Democrat, makes a point during a House committee debate on tax issues, Monday, May 11, 2015, at the Statehouse in Topeka, Kan. Watching to his right is Republican Rep. Ron Ryckman Sr., of Meade.

Meredith Dowty was arrested Friday and charged with making a criminal threat after officials were "alerted to threatening statements directed toward city of Wichita Mayor Brandon Whipple,” according to a news release from the Wichita Police Department.

Dowty was booked at 6:05 p.m. on Friday with no bail amount set, according to Sedgwick County Sheriff's Office booking details.

Whipple told CNN he gets threats periodically, but the details of "this one seemed different." He said a detective called him and read the text messages that were "sent to someone else who knew this person but also knew me."

"Obviously, the person was very angry, but also very detailed in what it sounded like they wanted to do," he added. "They wanted the address, my address. ... And also, this threat was more specific about kidnapping me and cutting my throat. Those were what was read to me. They were graphic. Luckily, our police force was able to track this person down and interview them and apparently they have arrested them."

Whipple said he does not have a copy of the messages, but he does recall that "it was anger over the mask ordinance that we got through. Anger over, I think really, just COVID in general."

There have been more than 10,000 confirmed COVID-19 cases and 120 deaths attributed to the virus in Sedgwick County during the pandemic, according to the 41 Action News Daily COVID-19 Tracker.

Whipple said he hopes it is not anything more organized, and that it is "just a single person who is a little deranged”.

The Wichita Police Department said the investigation is ongoing and will be presented to the Sedgwick County District Attorney's Office.

CNN has reached out to Dowty and has been unable to determine if he has an attorney at this time.

Whipple posted a statement Friday on his Twitter account: "In response to today's story concerning a threat I received: Violence is never a way to settle disagreements. We're always stronger together as a City even when times are at their toughest.

"Tensions may be high, but we will get through this together as Wichitans. Chelsea, the boys, & I appreciate the kind thoughts & prayers. We also would like to thank the brave men & women of the @WichitaPolice, who protect not just us, but our entire community. Thank you for the fast response in this matter & for all you do."

Whipple, a Democrat, served in the Kansas House of Representatives before becoming Wichita's mayor.