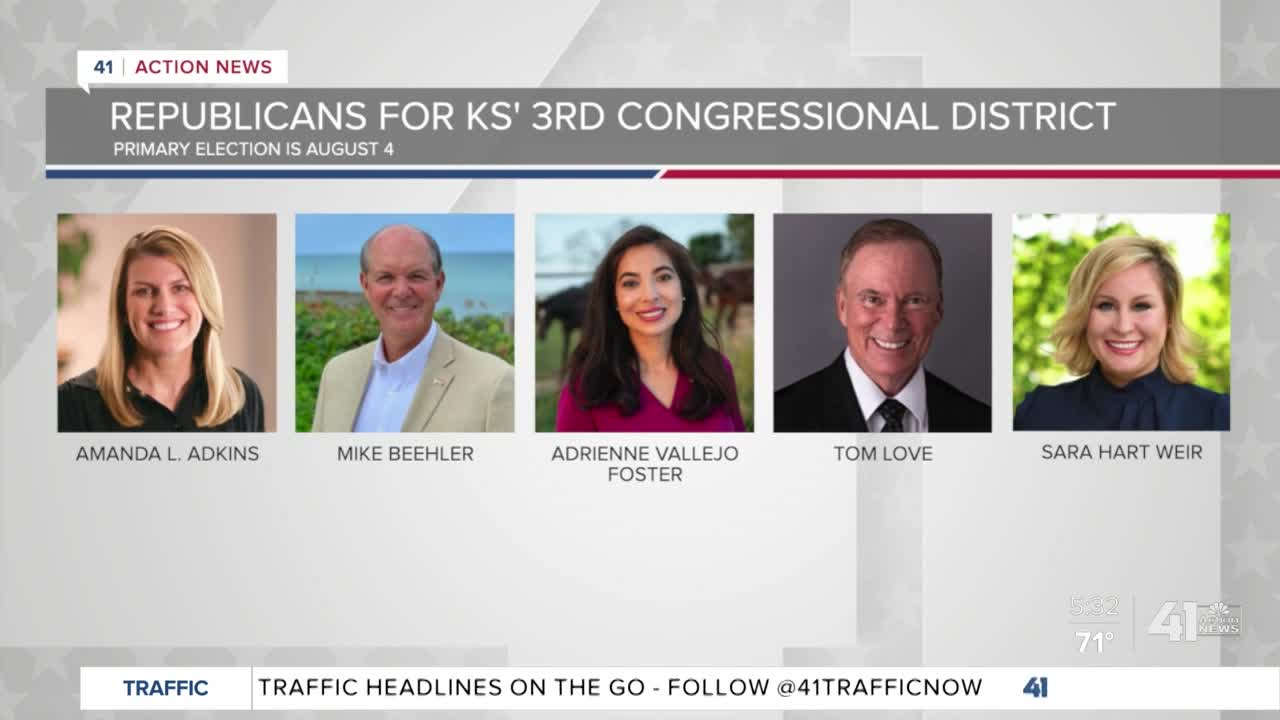 Five Republicans are running for the 3rd Congressional nomination in Kansas. 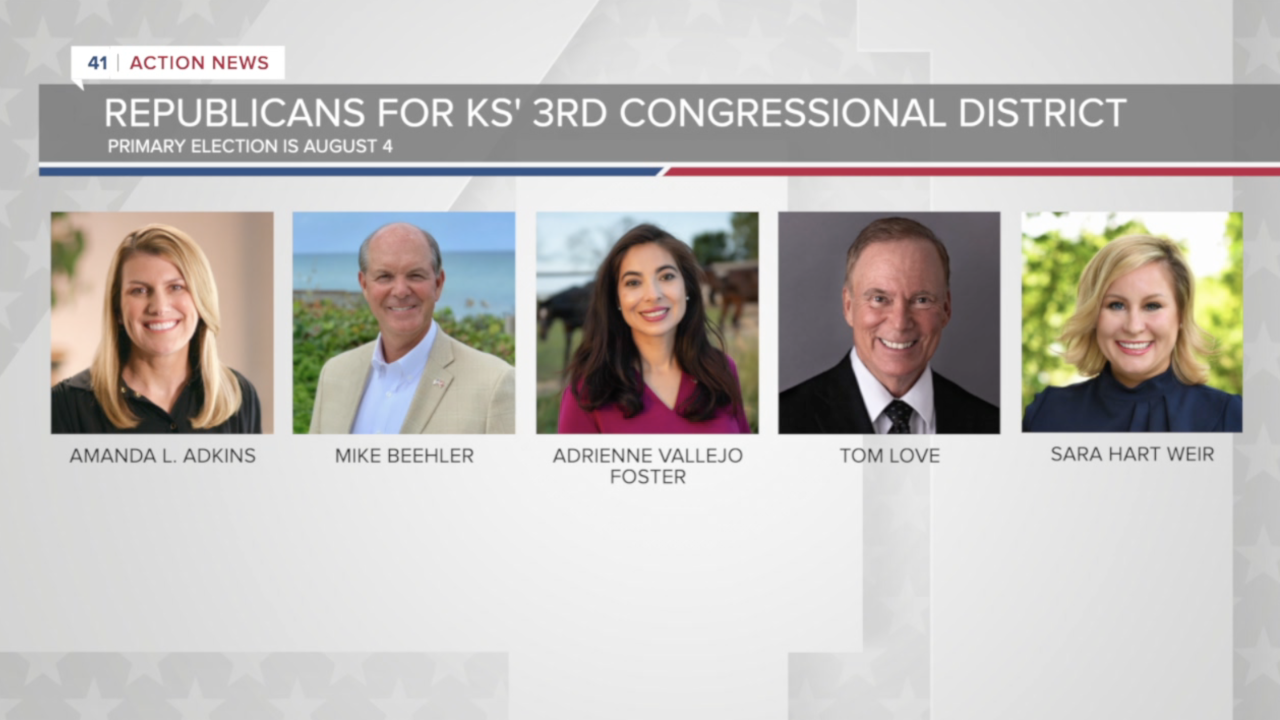 KANSAS CITY, Kan. — In one week, Republican voters in Kansas will choose a candidate to advance to the November general election for the 3rd Congressional District, which represents Wyandotte, Johnson and part of Miami counties in the U.S. House of Representatives.

Sharice Davids, a Democrat, currently holds the seat and does not have a primary challenger.

Voters will choose between five Republican candidates in the primary election on Aug. 4.

41 Action News asked candidates the same questions to help voters make their decision. Sara Hart Weir did not reply to our request for an interview. Some of her answers are from public statements she’s previously made.

All the candidates said they do not support defunding the police.

Adkins said police departments need to be transparent about bad officers and hold them accountable. She supports additional training and help to recruit for local departments.

Beehler said he’ll defend the police, not defund them. He said he trusts departments are continuously learning.

Foster said her brothers and cousins work in law enforcement.

Love had similar views to Adkins on transparency and accountability in police departments.

“There needs to be a record made of people that commit crimes as a police officer and they shouldn’t be able to move to another department without that other department knowing their history,” Love explained.

The four candidates who responded to our inquiry said they’d support repeal or replacement of the Affordable Care Act.

Adkins said families and individuals should have more control over what healthcare choices they have and how much they pay.

“What I’m for is smarter healthcare, transparent healthcare and more affordable healthcare,” she said.

Beehler believes getting people back to work is the best way to get people healthcare. He said when unemployment goes down, businesses offer better healthcare options in order to get employees, which only benefits those employees.

“When you have choices in healthcare, the quality goes up and the price goes down. That’s what we need to do first and foremost. I’m not so much worried about repealing Obamacare, I’d vote to repeal it if I get an up or down vote. But at the end of the day, what I do want to do is I want to get people back to work,” Beehler explained.

Love doesn’t want the federal government to run healthcare. He says affordability needs to be the first step.

“I don’t think it’s just, fair, or anything that because someone wasn’t able to pay their healthcare cost to essentially bankrupt them,” Love said.

Adkins supports a payroll tax holiday instead of a stimulus handout.

“That would actually allow both workers and businesses to keep more of their hard-earned money here in the near term. Helpful to the families, but for businesses, that would put them in a position to invest, grow and hire more people,” she explained.

Beehler said infrastructure projects will be the key to getting people back to work. He wants to make sure Kansas gets its hands on federal money for construction projects.

Foster would cut regulations she says get in the way of business owners and farmers. She also supports fewer trade restrictions.

Love said Congress has a lot of cleanup work to do. He criticized the decision to shut down non-essential businesses during the COVID-19 pandemic.

“If we did some common sense things, we wouldn’t have put millions of people out of business,” he said.

All of the candidates believe most work on education happens at the local level. But they’d like students to be in traditional school settings this fall, not subject to distance learning all school year.

“My worry is families that don’t [have the option for a parent to stay home] may have a child left home alone without guidance and unengaged in the school system,” she explained.

If elected, Beehler plans to introduce legislation that requires companies receiving federal funding for construction projects to put 0.1 percent of the contract amount toward STEAM (science, technology, engineering, arts, math) programs in a local school of the company’s choice.

“That’s exciting,” he said. “We’re going to double down on the things that are going to make our children competitive in the years to come in their lifetime.”

Foster said there is no one-size-fits-all approach to education.

Love has worked in public education for years. He envisions using federal money to build world-class literacy labs for students in kindergarten through second grade.

“It’s not that difficult: if you’re not able to read, you’re in trouble,” he said plainly.