Coffee with the Candidates: Quinton Lucas 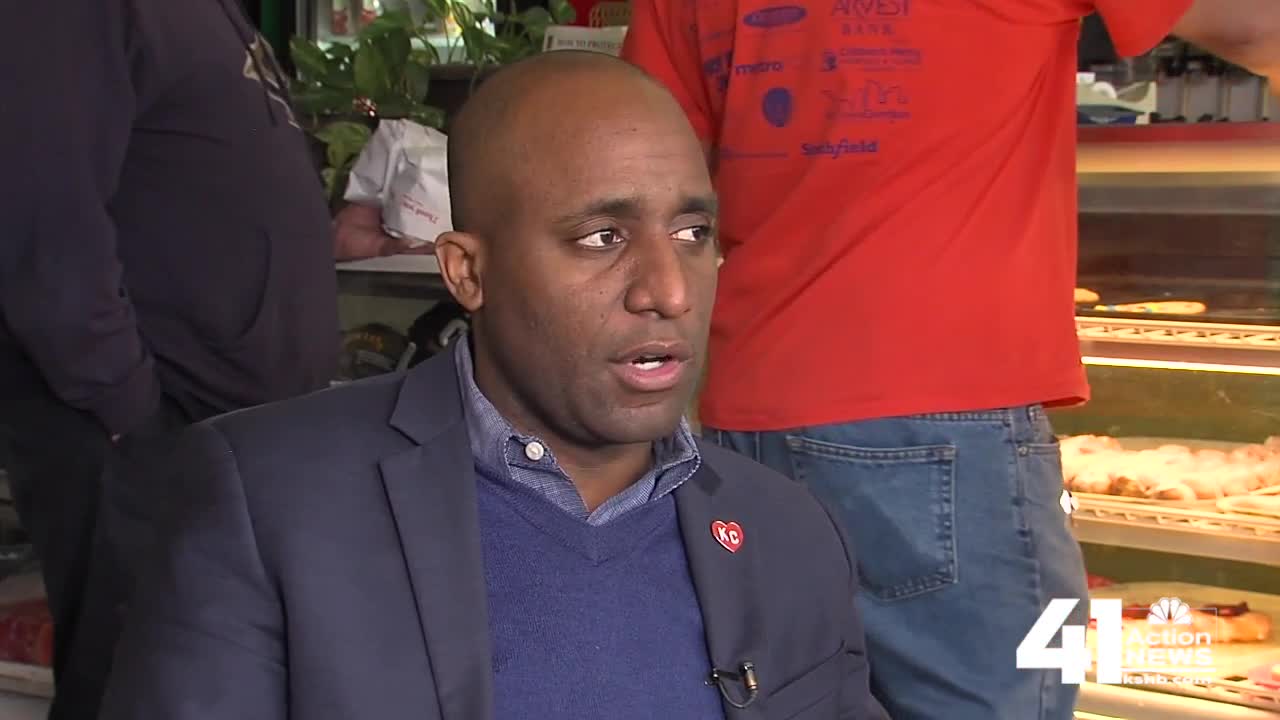 We met Councilman Quinton Lucas at the corner of 31st and Woodland, inside M&amp;M Bakery. 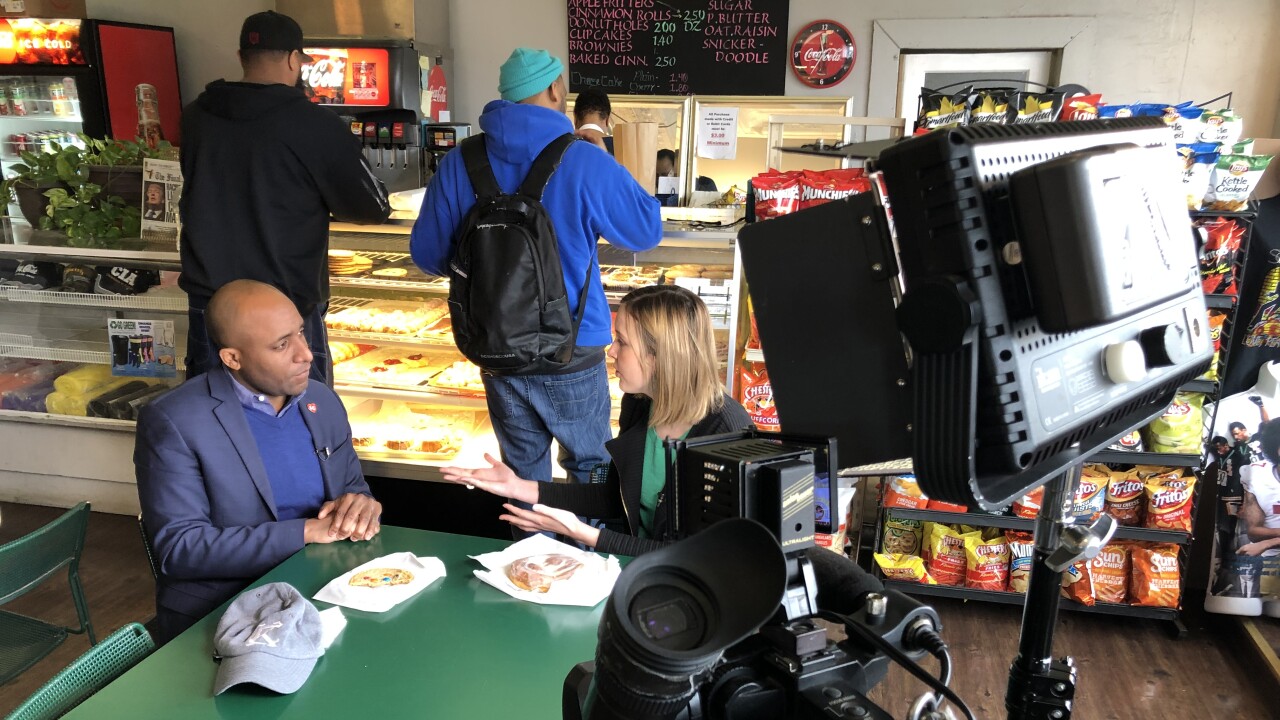 KANSAS CITY, Mo. — We met Councilman Quinton Lucas at the corner of 31st and Woodland, inside M&M Bakery.

It was a Friday morning, and the east side institution bustled with customers eager to pick up sandwiches, cookies and cinnamon rolls.

"I'm Quinton. Nice to meet you," Lucas said, while shaking the hand of an elementary student.

The third district councilman told 41 Action News he wanted to meet at M&M because it represents the best in the core of the city.

"We talk a lot about how we're improving things, particularly in east Kansas City, but a big part of that is making sure that businesses that have been there for a long time have that same love, that same attention from city hall," he said.

There's another reason why he chose the bakery.

"When I was a kid, my mom wouldn't let me eat all the sweet stuff as much as I would have liked," he said.

Lucas describes his mother, Quincy Bennett, as "vastly more impressive" than him. She has been a constant figure on the campaign trail and in his career.

"She's been working every day of her life, pretty much from the time she could and instilled in us a value of education, and it's something I've been going with ever since," he said.

That value of education resulted in Lucas attending the Barstow School on a scholarship.

"I remember at one point, we were at 41st and Indiana. Another point we're staying at a hotel because we're homeless, and then I'm going out to 115th and State Line," he said.

It's a juxtaposition he also encountered at Washington University in St.Louis and later at Cornell Law School, before returning to his hometown to practice law. Lucas later joined the faculty at the University of Kansas and successfully won a seat on the KCMO City Council.

"I think what we need is leadership that never forgot where they're from, and I'm never going to forget where I'm from," he said. "If you were growing up hungry and homeless in Kansas City in the '90s, if you remember desegregation, it sticks with you, and that stuck with me. But I also understand how our city needs progress, and I think I'm the one who can deliver it."

After that, it was down to the issues. Here's our Q&A with Councilman Quinton Lucas

Q. What have you thought about the new KCI process so far?

A. "We should have been up front from the start with an open, competitive bidding process. There was always this push to say we have to get things done in 45 days, which leads to a set of disasters," Lucas said.

He also disagreed with the way Burns & McDonnell was kicked out of the process and said it would be "arbitrary" and "unfair" to change the master bond ordinance at this point in the process.

As for the path forward?

"I’m glad we’re getting a new terminal. I think we heard loud and clear from the public that they wanted it. I think we’re moving in the right direction now, and I hope as we go forward, hopefully with me as mayor, but whomever, I think as long as they’re telling the truth, as long as they’re being forthcoming, as long as they’re saying 'Hey this thing is working, this thing maybe isn’t as well as we want it right now,' then we’re going somewhere and doing what we need to do."

Q. Moving to another infrastructure project: the streetcar. What do you think about the extensions in the works right now?

A. "I support the extension. I think it’s a good thing. I strongly dislike the way we’ve done streetcar in Kansas City."

He argued public transportation should be a way to bridge divides in the city.

"What I’d like to see in our next conversation about streetcar is how do you look to build a true citywide conversation too? I know our current mayor says, 'Well, I tried to run a line east/west.' Well, try again. I mean to me it’s the most amazing thing. We try again for things we care about," Lucas said.

Q. Potholes are dominating the conversation in the city right now. What would be your infrastructure priorities?

A. "I think step one would be making sure that our G.O. bond funds are dedicated and prioritized in my first years to going toward road reconstruction, going toward the real boring stuff. It's not fixing fountains. It's not throwing money into 18th and Vine. It's not doing some of the other stuff we've chosen to do. It's instead saying let's actually do what we had promised and pledged to do before."

Q. Affordable housing has been a big issue for you. What work have you done during your time on council?

A. Lucas pointed to his time as chair of the Housing Committee, where he spearheaded the creation of an affordable housing trust fund, plus the requirement of lower-rent units in new development receiving incentives from the city.

"Hopefully people wean themselves off those incentives," he said.

When we asked, Lucas also defended his vote on the controversial Three Light garage, part of an incentives package initially approved back in 2004.

If elected mayor, his next step would be identifying funding for the affordable housing trust fund. Lucas would use the $8 million in federal funds the city receives annually in connection to housing policy, plus the one-eighth cent sales tax for east side revitalization.

"When you grow up homeless, or when you lived in a house that didn’t have air conditioning or had pretty crappy heat or didn’t have hot water, all of which I experienced while I was going to Barstow ironically, but if you went through all of those steps, you know how hard it is to wait another year for something to get fixed."

Q. How do you think you would be a different mayor than Mayor Sly James?

A. "Let me start with this. I respect the hell out of Sly. He’s had an impressive career," Lucas said.

He went on to say he disagreed with how the airport procurement process and the streetcar had been handled. Lucas also thinks the conversations about tax incentives should have included school districts.

He sees himself as more of a collaborator than Mayor James.

"I get sometimes the need for a my-way-or-the-highway approach, but long-term, I don’t think we need that in Kansas City," Lucas said.

Q. What do you think about his Pre K plan? Are you going to be supporting that?

A. "I care about kids. I think everybody cares about kids and 4-year-olds. What I don't appreciate are a few thing about this plan," he said.

Lucas went on to say Pre K should be funded by a mill levy, not a sales tax. He said it's "not a good look" to move ahead without greater collaboration with KCPS.

Q. What work have you done on incentives, and what steps would you take as mayor?

A. "Incentives are some of the stuff that I'm proudest of," Lucas said.

He points to the 10 housing and five incentive reform ordinances he wrote, one of which capped tax abatements for developers.

"I want to have clear, consistent rules for developers about what we’ll do, but more than anything, I want to make sure that instead of saying no, we’re actually building a path where incentives go to areas that need it, like here at 31st and Woodland, where we’re sitting across the street from an abandoned building."

Q. What are the root causes of violent crime in our city, and what will you do to address it?

A. "The root cause of crime is poverty really. It’s hopelessness," Lucas said.

While addressing the root causes is ideal in the long-term, he said intervention is the priority.

"The first step to a good public health approach, whether it be an epidemic, suicide or homicides, is intervention. You put a barrier on a bridge so people don’t jump off. That intervention step is the social workers at the police department. It’s having a good presence in policing in Kansas City, and a good neighborly connection with police. Frankly I think it’s making sure people are in our communities and know that we care about them."

In the short-term, Lucas said he would "adequately fund police," but in a way that prioritizes where resources are going. He argued spending on patrol and administration are "shockingly" close right now, and resources should be out in the community.

He would also find permanent funding for the social worker program and work with superintendents on intervention steps in school districts.

Q. What have you learned since your arrest on suspicion of operating under the influence?

A. "I think the most important thing I have learned since then is the difference in resources that you have and what that means in our criminal justice system. For a few thousand dollars and a few other things, my life kept moving. But there are people who are going through our municipal justice systems and don’t have that opportunity," he said.

He said criminal justice reform should be looked at on the municipal level, not just on the state and federal levels.

"I’ve also learned about our community. I’ve had an outstanding relationship with law enforcement here in Kansas City from the time I got elected. A lot of them reached out to me after that incident and said, 'We know who you are. We know what you stand for. We’re still with you and support you.' That has been impressive and touching," Lucas said.

He believes the "overwhelming weight of case law" will lead to a dismissal, but that has not happened yet.

"Particularly as a black politician, I didn’t want to grow up ever thinking I’d see my mug shot on the news, but I think as much as anything, you learn a lot from it, and people learn a lot from how you weather challenges in life," said Lucas.

The councilman concluded the conversation by talking about his vision for the future of the city, which includes more people moving back into the east side, and KC falling off the "top 10 dangerous cities" list.

He summed it up by referencing an interaction he had with Jackson County Executive Frank White.

"He stopped me and he said, 'You know, I feel like the people need a win, and the people don’t get a win enough.' All I want to do is just say yeah, the people have gotta win. That’s what I’m about."

More information about Lucas is available on his campaign website.