Coffee with the Candidates: Scott Wagner 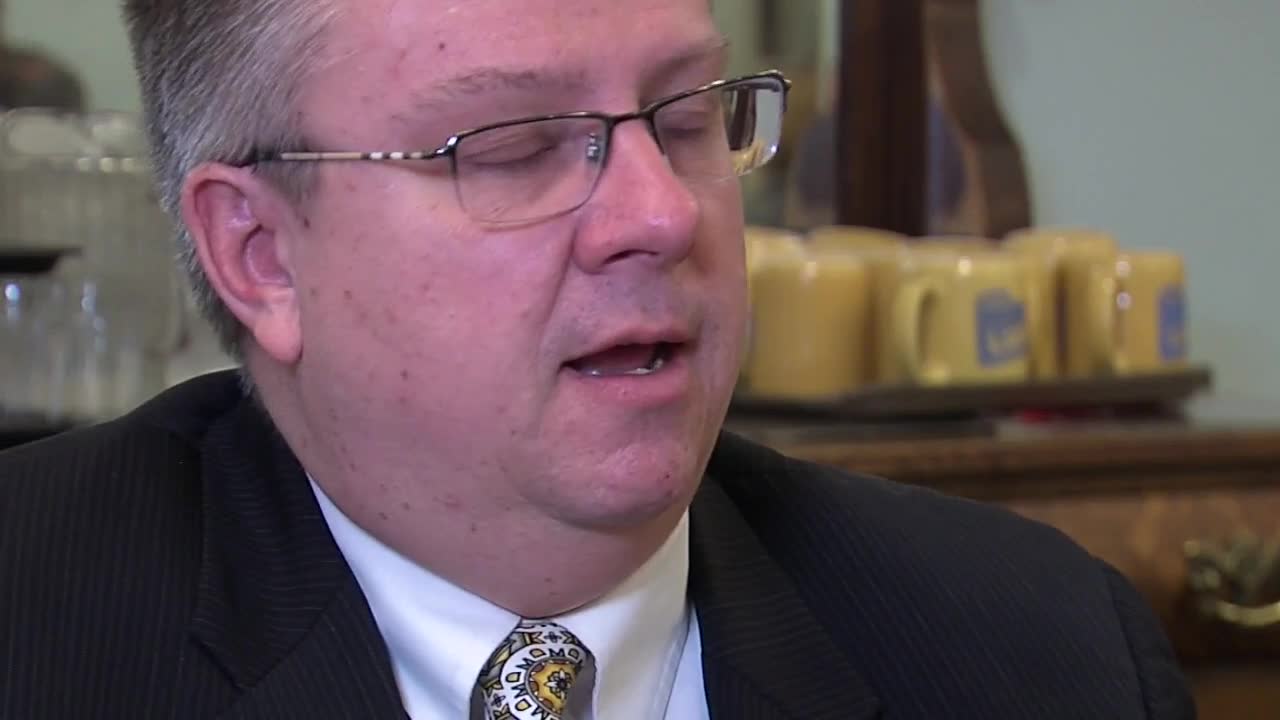 We met Mayor Pro Tem Scott Wagner at one of his favorite restaurants in the Northland. 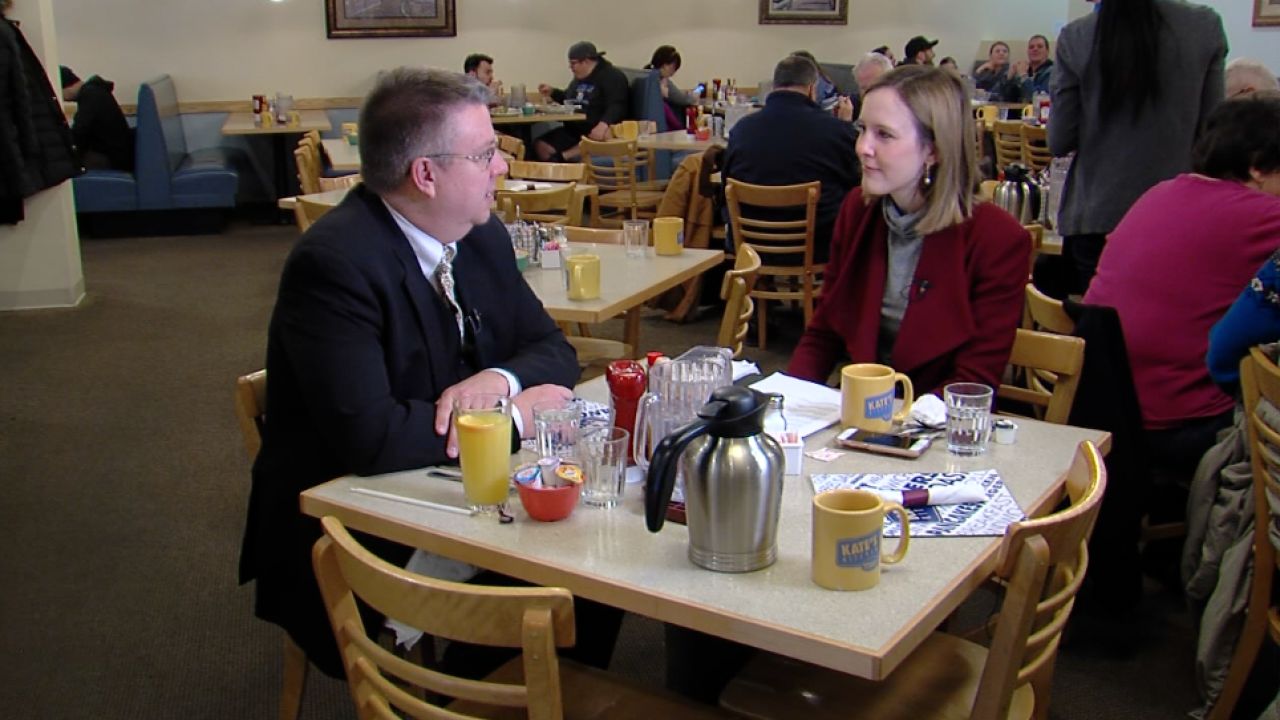 "This is where I grew up," Wagner said. "In fact the high school I went to is about a half-a-block from where we're sitting now."

After graduating from Oak Park High School, Wagner went on to study history, business and economics at William Jewell College. He worked for an agency before starting his own marketing business.

Although he served as treasurer and president of the Indian Mound Neighborhood Association, Wagner and his wife, Laura, returned to the Northland to raise their two boys.

"I just remember what a great place it was and it continues to be, and now I get to impact its future, and that's pretty special for me," Wagner said, referencing his two terms on the council.

Although we've dubbed our mayoral series "Coffee with the Candidates," Wagner opted for a glass of orange juice during his interview.

"Gotta have the vitamin C for these questions," he said.

Wagner is rarely unprepared for a question, thanks in large part to the amount of homework he does on issues before the council.

The "policy wonk" title is not one he set out to put on his resume, but he understands why people call him that.

Wagner is known to ask plenty of questions when it comes to the New KCI project.

"If we're making a decision that really has a 35 to 40-year life to it, then I think we need to understand the decision we're making, why we're making it and what obligations we're putting on our residents, our users of the airport and every council member that comes after me," Wagner said.

Wagner's questions are not always welcomed, particularly by Mayor Sly James. Still, the councilman maintains his queries are helping the city get the best deal.

"I still don't mind asking the question as to how much does it cost? Why does it cost that much? How are we going to actually finance that over the course of the next 35 years?" he said.

While Wagner believes the city must adhere to contracts from previous administrations, he thinks the approach to incentives should be different moving forward.

"If you're negotiating out of desperation because you want so badly for something to happen, guess what, you're going to get a bad deal," he said. "If on the other hand you are prepared to walk away from a deal at any time, then you can negotiate from strength and ask for the things you want."

The councilman did not support fellow councilmembers' efforts to cap incentives.

"I voted it against it. What you will have happen is a bunch of projects go to the Port Authority of Kansas City, and that's exactly what happened," he said.

Wagner first pointed to the ordinance he initiated in 2017 to develop a housing policy for the city.

Wagner supports requirements for affordable housing in incentivized projects downtown, but he insists that approach does not work in every other part of the city.

"If you're looking for something that has a $600 rent or $800 rent, in some parts of our city, the market will not provide that, so the city has to come up with that gap financing," Wagner said.

To fund gap financing, Wagner has several suggestions, including going to voters to increase the existing health levy or property taxes.

"What we have seen with the starter line shows that fixed-rail development in Kansas City can be successful, can create more density and development, so why not expand that?" Wagner said of extensions in the works.

"The real issue that we have here in the city is maintenance," Wagner said.

The councilman's plan includes increasing the budget for street resurfacing. He says the needed infrastructure improvements will take fiscal discipline.

"There's nothing special or sexy about this. This is really a matter of what do you want to focus on, and are you willing to spend the money where you're going to get the biggest bang for your buck, or will you just throw a few dollars here and there to make more people happy?" he said.

The bleak reality of violence in Kansas City was thrown into stark relief for Wagner when he attended the funeral of 15-year-old Anjanique Wright, who was shot outside Central Academy of Excellence earlier this year. During Wright's visitation, police responded to shots fired outside.

"The reality is that it's everybody's problem," he said. "When that happens to a young person as it did at Central High, that means an opportunity is gone, a potentiality is gone."

Just before the funeral, Wagner heard KCPS Superintendent Dr. Mark Bedell speak to a neighborhood association. The leader told members they could help the school district by getting involved with students.

That would be one of Wagner's goals as mayor.

"I think we should have 1,000 people step up and say I want to be a mentor for a young person in this city," he said. "If, as mayor, I need to put together a program to do it, I'll do it. I will also help existing programs."

Wagner said he is already working on short-term fixes through his position on the council, where he supported increasing the number of police call-takers and investing in prevention programs like Aim4Peace.

He would continue that emphasis on prevention, but would also focus on setting up a "set of carrots and sticks" to discourage crime and keep neighborhoods safe.

"If someone has done a bad thing, then people need to know that they're going to be gone for a while," he said. "What we currently have in our system is people go in and they go out."

"I think what we have seen, especially in this last term, is everybody likes to fight," Wagner said.

The mayor pro tem said he would explain his vision and work collaboratively with colleagues, instead of "beating up" those who disagree.

"I am not going to come in and say I know every answer and you all need to agree with me and if you don't, I'm just going to tell everyone to send you a letter and tell you you don't know what you're talking about. That's not going to be my approach," Wagner said.

Standing Out in a Crowded Field

"I've heard a lot of great ideas in this campaign from a number of candidates, but the difference is you need to know the how," Wagner said.

The mayor pro tem also emphasized the importance of knowing how to convince others on city council to see and support your vision.

"Out of everybody, I think I can walk into this job day one and not miss a beat."