Coffee with the Candidates: Steve Miller 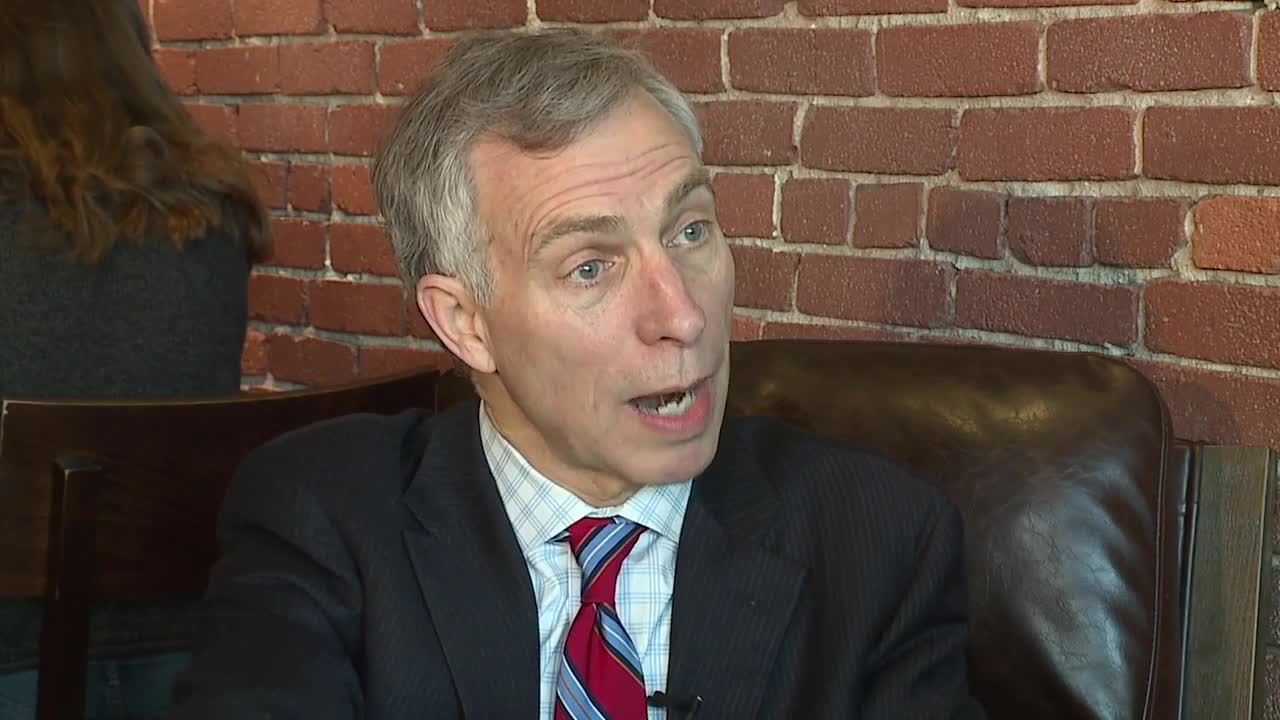 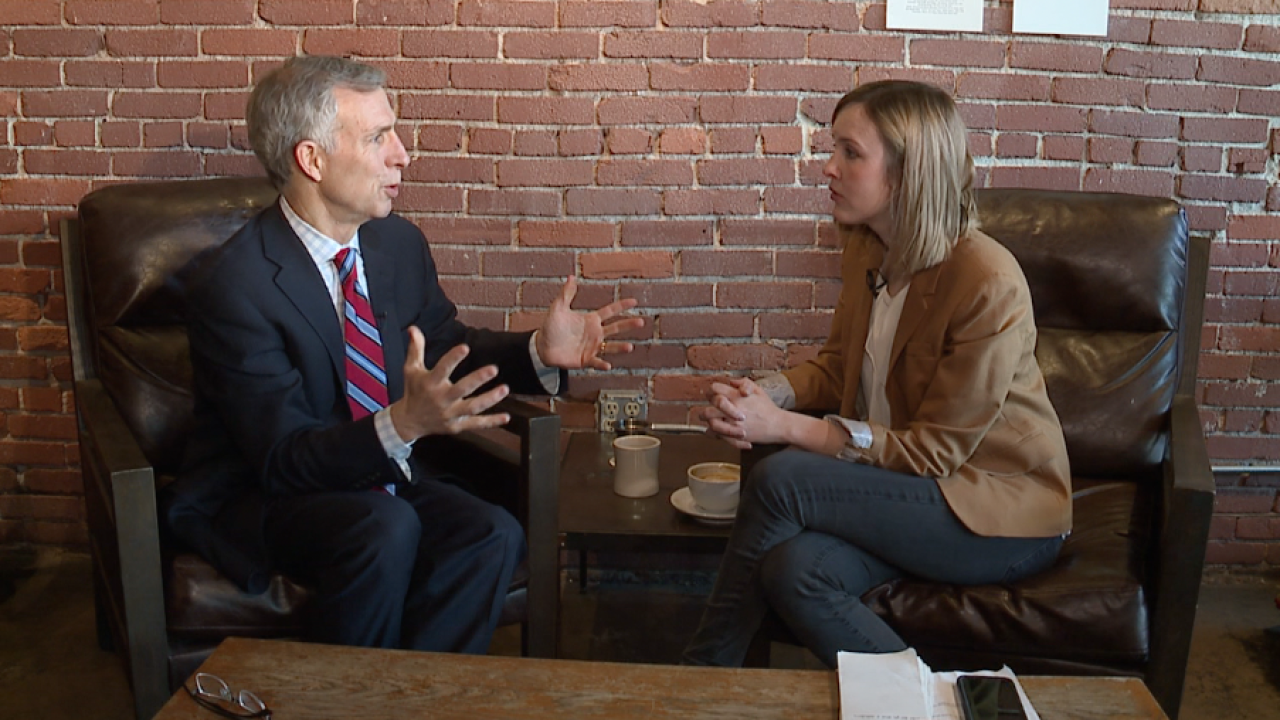 Within minutes of arriving, Miller ran into one of his old classmates from Rockhurst High School. That's one of the reasons why he loves Kansas City.

"There's just something special about neighborhoods and the little places you can go where you bump into, like we did this morning, friends from high school," he said.

Miller was the oldest of nine children in a devoutly Catholic family. After high school, he went to the University of Notre Dame for his undergraduate and law degrees. Next, after a brief stint practicing law back home, he returned to South Bend to study theology.

"Some people run to Europe, some people immerse themselves in something different. For me, it was kind of immersing myself in the faith tradition my family passed on to me," Miller said.

When he returned to Kansas City, Miller married the love of his life, Susan Henke-Miller. When their daughters were just 2 and 3 years-old, the Millers' world came crashing down with a terrifying diagnosis for Susan: stage IV breast cancer.

"When that doctor walked out the surgery room and said to me, 'I'm sorry, Mr. Miller, your wife has cancer. The tumor is large and aggressive.' Everything changed," he recalled.

Henke-Miller is celebrating 20 years as a survivor of metastatic breast cancer. The Millers helped found Turning Point, a non profit that provides services for patients suffering from chronic illnesses.

Between volunteer work at Cristo Rey High School, The Don Bosco Centers and Christmas in October, Miller says he thought his service would be in the non profit world.

That changed 10 years ago, when leaders approached him about an appointment to the Missouri Highways and Transportation Commission.

"That took me into a world I never expected of public service, where I had an opportunity to lead the 7th largest transportation system in the country and an organization that’s bigger than Kansas City," Miller said.

That experience set him on the path to run for mayor.

"I thought I could do what I was trying to do in smaller ways in the non profit, I found this was an opportunity on a really big scale to make a difference for Kansas City at a time that I think is the most critical time in my life for the future of the city," he said.

Here are the other issues we discussed with Miller:

Miller began by pointing out Kansas City is embarking on one of its largest infrastructure projects to date, the new terminal at KCI.

"I’ve said publicly that I’ve been very concerned with the process that has gone on there. It’s gone from crisis to crisis to crisis, and this is something that I have a great deal of experience in because I have spent 35 years sorting through problems on projects," he said.

Miller went on to say residents also want a return to the basics, like fixing potholes.

"Even as we increase taxes to put more money on the roads, in the budget we actually reduced the amount of money that we were devoting to roads," he said, " I hope to be able to bring some real knowledge and some discipline to make certain we just maintain the basics here: roads and sidewalks, and that we pick up the trash."

Miller supports both extensions in the works.

"I think as mayor, I think you have to make certain we get to DC and we get the money to complete it. We need federal money to complete that. What’s exciting for me about streetcar, and particularly this extension, is that its going to link us to UMKC and I see for the future of our city is tied to a very vibrant UMKC," Miller said.

He sees the streetcar as a uniting force to help bridge the racial divide in Kansas CIty. However, Miller acknowledged there's more work to be done.

"The irony with our transportation system is we make streetcar free for everyone, but for buses, that really move our working people that most need it, they’ve got to pay. We need to continue to work on that. As someone who has devoted a career to doing transportation issues, I’m really excited to tackle that. The city, KCATA, I think we can do a lot more on public transportation. I think streetcar can form a spine for the system, but we have to understand it takes a lot more than that," he said.

"Right now, the first thing we have to do, I think as a new mayor is when you come in, you have to put a sense of urgency on crime and really spotlight it, maybe more than we have already. We need to go through and make a really honest assessment with all our stakeholders – those stakeholders are obviously our law enforcement and prosecutor but that’s neighborhood groups, activists and of course our non profits and that’s our business community – we all have a stake in this," Miller said.

City -wide initiatives include linking school and non-profit programs for conflict resolution and community policing and crisis-intervention training for officers. On the neighborhood level, Miller would create block captain teams to work directly with police.

He would also focus on creating more skills training for young people.

"How wonderful would it be for someone to learn a skill like a carpenter, plumper, electrician or a pipefitter – those are lifetime skills. Our challenge in this community is to look at the dignity of work of all kinds and the importance of human beings to have the dignity of work. To feel like everyday that you have something that you’re good at. And that you like doing and can help support you and can earn a fair wage," he said.

While Miller is "finding it difficult" to support Mayor James' plan, he does support Pre K as a goal for the city.

"If it passes at the polls, I’m going to throw my shoulder and weight behind it and make sure it succeeds. If for some reason it doesn’t pass at the polls, I’m not going to drop that issue. It will have served as an important conversation. I’m going to make certain we get those stakeholders back around the table and hammer out something that we can get more support for," Miller said.

41 Action News asked Miller if there was a recent example of the use of incentives with which he disagreed.

"I have not had the opportunity to be down in the details as you need to be to really point out to you what I think were the boondoogles, but clearly there are people in our community who think there are projects that should not have been done," he said.

Miller argues one problem with recent projects is that they've been considered in isolation, not with a holistic view of the city. That's why he is calling for the creation of a new city plan called "Focus 2020."

"That bigger vision allows us to address the big issues. What can we do in creating this city that’s going to make us more diverse, help to heal the segregation we’ve had in this city? What can we do to make it more equitable?"

To Miller, the solution for affordable housing includes drawing funds from federal, state and local pots.

"That means the city doing what we can do with our limited resources, but that also means reaching out to other stakeholders like businesses and charitable foundations," Miller said.

Affordable housing would also be addressed in "Focus 2020."

"The things that I talk about being as mayor, this didn’t just start when I decided to be a candidate. I’ve been working on these issues for my whole professional career," Miller said.

A legal career, he points out, that has lasted longer than some of the other candidates have been alive.

At a time of political divisiveness, Miller also believes he can serve as a unifying presence since he has not been part of the wrangling on the city council.

You can read more about Steve Miller's platform here.