Kerry: US to accept more refugees from Syria 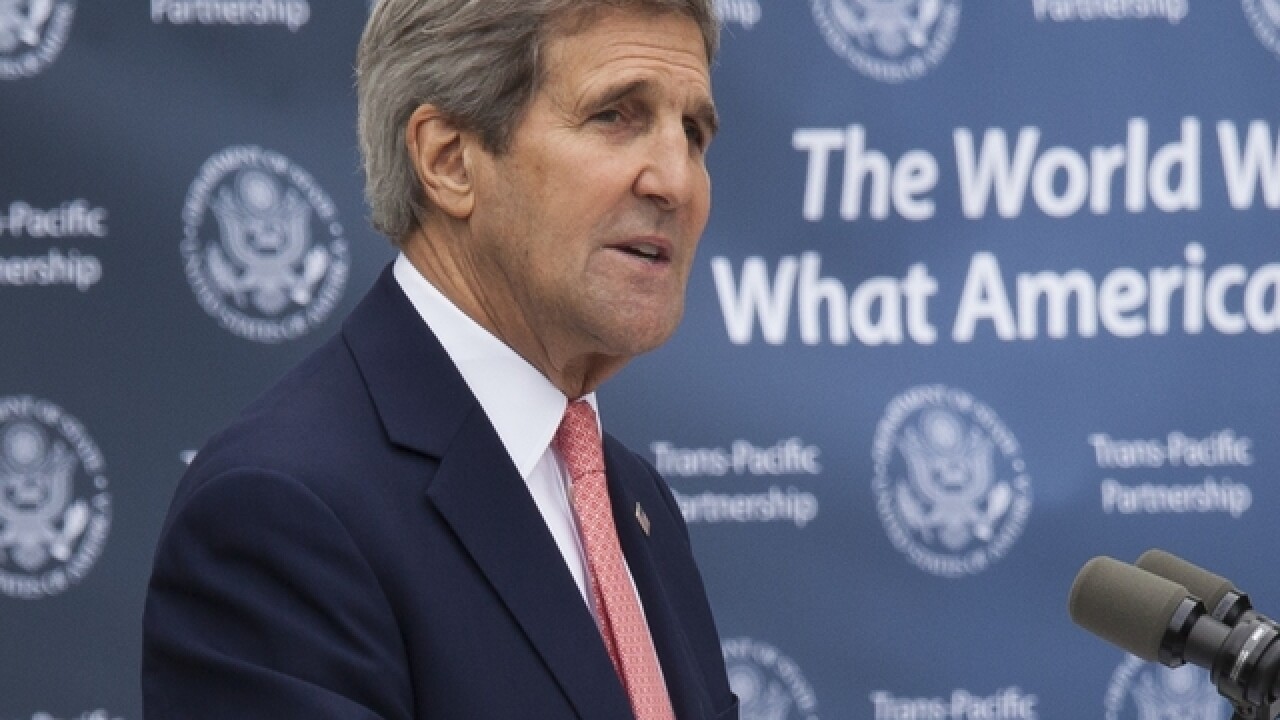 Trying to address the Syrian refugee crisis, U.S. Secretary of State John Kerry announced Sunday that the United States would significantly increase the number of worldwide refugees it takes in over the next two years, though not by nearly the amount many activists and former officials have urged.

The U.S. will accept 85,000 refugees from around the world next year, up from 70,000, and that total would rise to 100,000 in 2017, Kerry said at news conference with German Foreign Minister Frank-Walter Steinmeier after the two discussed the mass migration of Syrians fleeing their civil war.

Many, though not all, of the additional refugees would be Syrian, American officials have said. Others would come from strife-torn areas of Africa. The White House had previously announced it intended to take in 10,000 additional Syrian refugees over the next year.

Asked why the U.S. couldn't take more, Kerry cited post-Sept. 11 screening requirements and a lack of money made available by Congress. "We're doing what we know we can manage immediately," he said.

The migrants would be referred by the U.N. refugee agency, screened by the U.S. Department of Homeland Security and resettled around the U.S.

"This step is in keeping with America's best tradition as a land of second chances and a beacon of hope," Kerry said. Kerry also met with some refugee families on the wooded, lakeside resort-style campus of the foreign ministry's education center outside Berlin.

Congressional approval is not required for the expansion of resettlement slots, though Congress would have to appropriate money to pay for the additional effort. Some Republican lawmakers have expressed concerns that Islamic State militants could seek to slip into Europe or the U.S. posing as migrants.

In 2011, two Kentucky residents who had been resettled as Iraqi refugees were accused of being al-Qaida members. They were convicted of terrorism charges after their fingerprints were linked to roadside bombs in Iraq. That led to a cumbersome reinvestigation process and new steps to screen refugees, a process that has been criticized as slow and bureaucratic.

"Some of the 65,000 that came from Iraq actually were trying to buy stinger missiles in my hometown in Kentucky," said U.S. Sen. Rand Paul of Kentucky, a Republican presidential candidate, in a broadcast interview. "So we do have to be weary of some of the threat that comes from mass migration."

Even if the U.S. took in 30,000 Syrians over the next two years — an unlikely outcome, given that only 1,500 have been admitted since the start of the war — that number would pale in comparison to the hundreds of thousands that Germany is expected to accept, or the 800,000 Vietnamese that the U.S. resettled in the years after the Vietnam war.

A letter made public last week and signed by several former Obama administration officials urged the U.S. government to accept 100,000 Syrian migrants, and to put in place special rules to speed the resettlement process.

In Washington, Democratic presidential candidate and former Secretary of State Hillary Rodham Clinton said in a television interview that the U.S. "has to do more and I would like to see us move from what is a good start with 10,000 to 65,000 and begin immediately to put into place the mechanisms for vetting the people we would take in, looking to really emphasis some of those who are most vulnerable."

Conditions in Syria have been growing increasingly dire as the civil war grinds on, and as many as 9 million people have been displaced, including more than 4 million who have fled the country, according to the United Nations.

"Current efforts are not adequate," according to the letter, signed by Michelle Flournoy, a former senior U.S. defense official who once was Obama's choice for Pentagon chief, and Harold Koh, the former State Department legal adviser. "Humanitarian aid has fallen short in the face of unspeakable suffering."

A U.S. acceptance of 100,000 Syrians, the letter said, "would send a powerful signal to governments in Europe and the Middle East about their obligation to do more."

Kerry did not address why the U.S. proposal is well short of what the former officials advocated, but in London on Saturday, he said the migrant crisis must be solved by ending Syria's civil war and replacing President Bashar Assad.

Kerry on made clear Saturday the U.S. was willing to negotiate the terms of Assad's exit with Russia, which is backing his government with a recent military buildup. The Russians brought in fighter jets and surface to air missiles that could threaten American plans, much to the dismay of American officials.

Critics have accused the Obama administration of passivity in the face of Russian aggression.

After holding out hope Saturday that Russia could help the U.S. fight the Islamic State, Kerry took a somewhat tougher line on Sunday, saying that he and the German foreign minister agreed that "support for the (Syrian) regime by Russia, or by any other country, risks exacerbating the conflict and only hinders future cooperation toward a successful transition."