KANSAS CITY, Mo. — On this day in 1993, the Missouri River rose to its highest point in history. Several areas across the metro were flooded and many recall the businesses that had to decide whether to shut down or rebuild.

Twenty-five years later, several agencies are working to prevent devastation from happening again in the metro.

"I don't remember a lot of it," said Jen Boyd, Riverside Red X.

Jen Boyd was too young to remember her grandfather's store looking more like an island. Growing up, she recalls seeing pictures and hearing many stories.

"I know that the community really rallied together and I know that they were out here sandbagging trying to put all the sandbags out in front of the store to try and keep the water from coming in," said Boyd.

Efforts that could not protect the Riverside Red X from nearly going underwater. 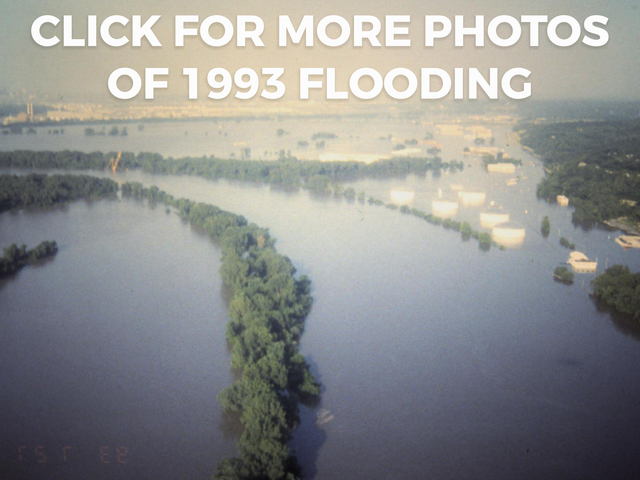 "In the store, the water was up to about the ceiling so it was very very impactful and devastating for us," said Boyd.

The Great Flood of 1993 was not the first time the Red X was faced with the decision to rebuild. The store was flooded in the 1950s, burned to the ground in the 1960s and flooded again in 1993.

At the time of the floods, Kansas City had no levee protecting the Riverside area.

"We have nine levees in the area. At the time of 1993 flood, we had 7 levees, so two have been constructed since then," said Tom Kimes, Stormwater Utility Engineering Manager, KC Water.

The Quindaro and Riverside levees were just built in the last 10 years. Several agencies partner to continuously maintain and update the levee system.

Kansas City has two types of levees, an earthen levee and flood walls.

"They both do the same job, they hold the water back," said Poer.

Historically, the Missouri River has flooded about every 20 years.

Kimes said the Great Flood of 1993 could happen any year. He said it can be dependent on how much snow melts into the river from North and South Dakota.

With two additional levees and retention ponds added in Riverside, the Red X is hopeful they're never faced with rebuilding again.

"I know that the levees are definitely there to protect us and to help us and I know that anytime you have that extra reassurance, it's always a good thing," said Boyd.

Kansas City has one of the largest levee systems in the country. Each year, the U.S. Army Corps of Engineers works with several local agencies to inspect and test the levee systems.