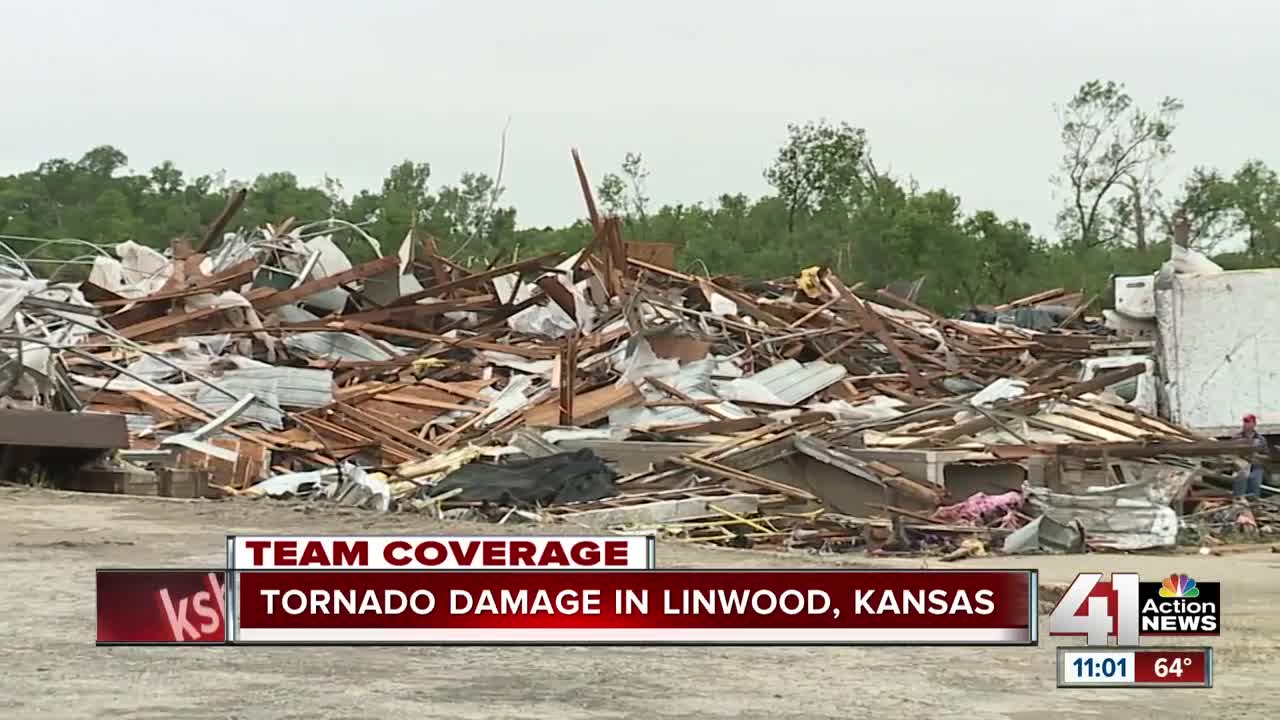 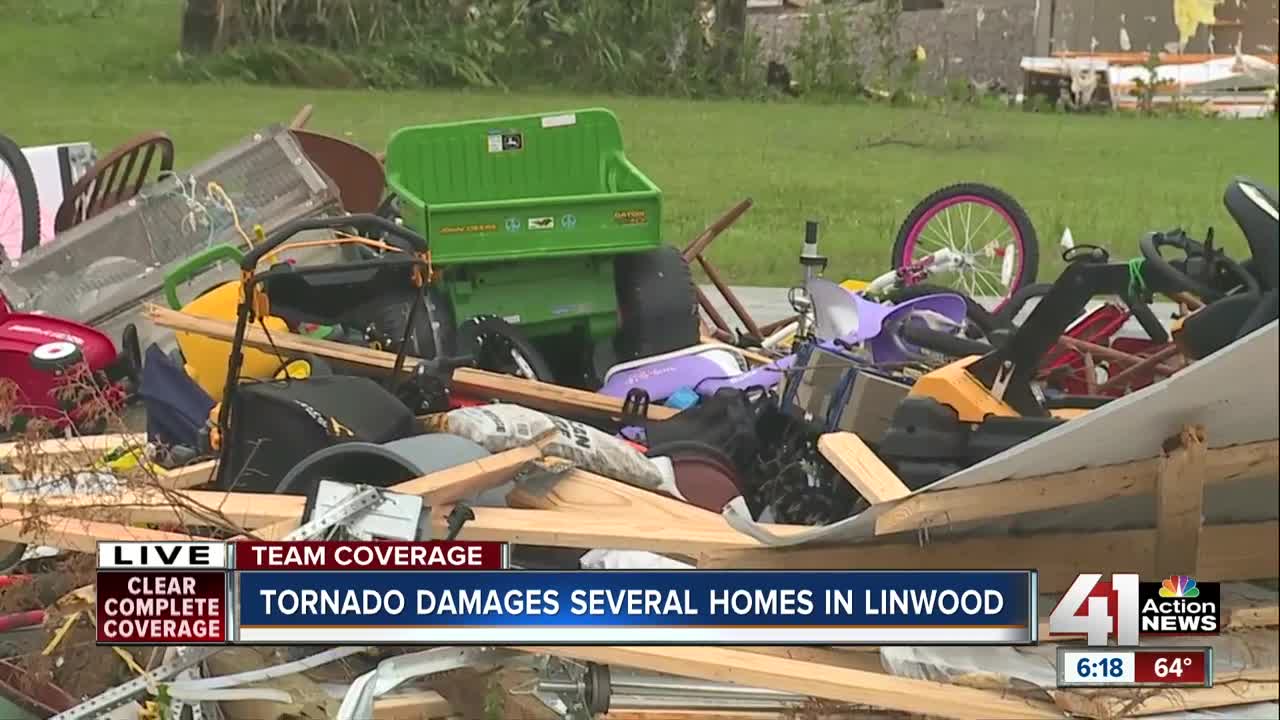 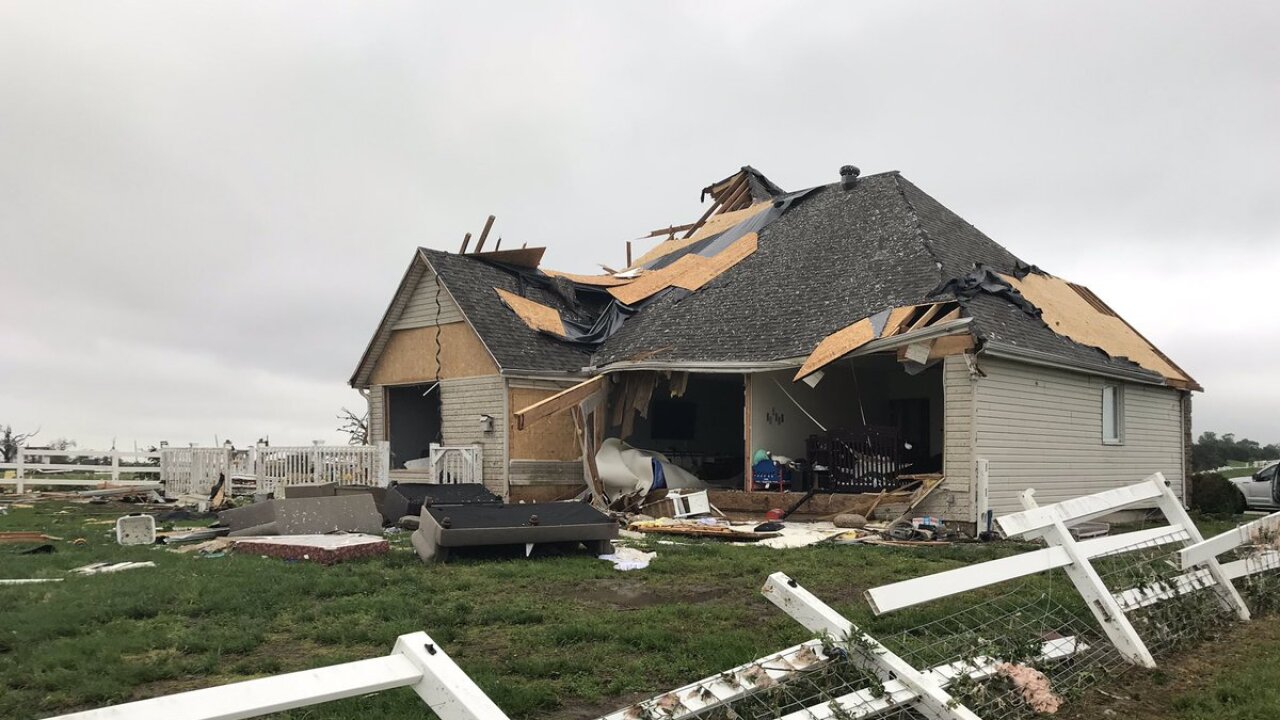 Brian Perry lives along K-32 in the town of about 400 people. He said he heard sirens Tuesday evening, went outside, and then realized a tornado was coming his way so went into the basement.

"I grabbed an egg crate foam pad and grabbed it and pulled it over with my wife and my dogs and we just waited until it was done," he said. "It destroyed everything in the basement. It ripped half the roof off. I’ve never seen anything like it before."

One man took cover under a tractor as the tornado tore through his workplace, Free State Growers. Winds pushed a wall on top of the tractor, but he survived without any serious injury.

At about 7 p.m. Tuesday, the tornado hit the 10-acre greenhouse in Linwood. The facility for growing and shipping plants and flowers is destroyed.

“He was pretty frightened, he was pretty shook up. But he feels like he got a second chance. And I think he did,” owner Mark Illausky said.

No one else was at the greenhouse when the tornado hit.

Debris from the greenhouse landed at Kansas City International Airport, roughly 27 miles away.

“It's just devastating looking around,” Illausky said. “Greenhouse structures are lightweight structures. They're not built to withstand this. But even our shipping building up there, it has steel girders and it just pulled it back like a sardine can.”

Illausky said he plans to rebuild. Free State Growers is 100 years old and has been in Linwood for the past 40 years.

Leavenworth County leaders have not reported any serious injuries or deaths as a result of the storm. The National Weather Service had not yet categorized the tornado as of Wednesday morning.

However, there's no doubt in the mind of Perry's neighbor that a tornado came through town.

"It sounded like it was demolishing my house. Roof falling in and blowing off," Ann Hurt said.

Around the corner, Aaron McLaren's home is a total loss. The nurse was at work when the tornado hit. He said his wife, two kids and grandfather all left the home before the storm arrived and are safe.

McLaren said he's digesting the fact that his home is ruined. He is amazed how the tornado destroyed things like furniture, but did not touch his model car collection. Now, he will work with insurance to move on.

"I would assume tear down the house, and start fresh, let my wife build a dream house," McLaren said. "Something where we can move on and make more happy memories in, but we'll always remember the memories we had here."

Lenexa, Kansas-based Heart to Heart International set up its Mobile Medical Unit at Linwood Elementary School. The unit provides medical and hygiene care, water, and medicines. It will have a generator for people to charge cellphones.