KANSAS CITY, Mo. — What we put in our recycling bins ends up in one of a small handful of facilities in the Kansas City area. Now, a big change in what China will import is hitting recycling around the world and in Kansas City.

A full truck backed into the WCA Materials Recovery Facility (MRF) in Harrisonville, Missouri, to dump what it picked up from one residential route. They said they are the second largest MRF in the area and take in thousands of tons per month including from Kansas City, Missouri.

“We sort it, we clean it up, we process it,” said Tom Coffman with WCA.

But a lot of that never gets recycled.

“Some days, 25 percent, one in every four items that comes through here ends up here,” said Coffman, pointing to a discard pile that will eventually end up in the landfill.

At another larger Kansas City facility, Waste Management officials said they take in 8,000 tons per month. Up to 18 percent is contaminated or can’t be recycled. That is almost 1,500 tons per month.

Midwest Shredding said 150 tons per month, 10 percent of what it takes in, has to go to a landfill. 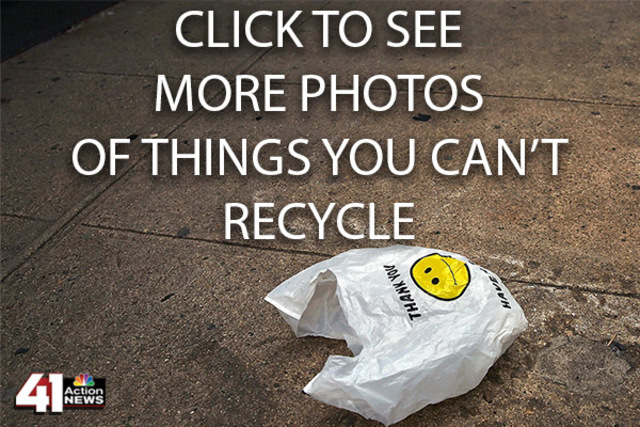 </p><p>Coffman walked us through a few items he found that illustrate why.

“So that’s a laundry basket. That has no business being in a residential recycling container,” he said, pointing to the top of one pile. Picking up a camera, he said, “Here’s a flash, it is not recyclable.”

Sam Uelhoke sorts recyclables as they move on belts through the facility. “Plastic bag, plastic bag…old swimming pool,” he said as he pulled out what he can’t let go through.

Coffman said plastic bags are a big problem and should not go in your curbside recycling bin.

“They get stuck in the machines,” Uelhoke said.

What does make it through gets baled to send to market and sell, but these days it’s a tough sell.

A new study showed China has been importing 45 percent of the world’s plastic waste since 1992.

But last year, the country announced it would stop taking several kinds of waste, including types of plastic, and start stricter standards on what it will take.

“China was the largest importer of paper, fiber, paper products and plastics prior to the ban,” said Paul Howe with Waste Management.

“So it takes a lot longer and is a lot harder to move now,” said Coffman.

“Essentially, everybody is scared to death here,” said Matt Riggs, the Outreach Coordinator from the Mid-America Regional Council's Solid Waste Management District. “Because most of our stuff goes to China.”

MARC is trying to educate the public on what is and is not recyclable, now more important than ever.

For help with what to recycle and where, visit MARC’s website WWW.RECYCLESPOT.ORG

“Really, the best thing Joe Public can do is recycle better,” said Riggs.

A lot of us need help. 41 Action News Anchor Lindsay Shively put her recycling bin to the test and quizzed some Kansas City recyclers, too.

Lindsay had to remove a greasy pizza box, disposable coffee cups, and plastic bags from her bin, but one that really surprised her and other recyclers was a plastic ‘clamshell’ for strawberries.

Howe said that Waste Management will no longer be accepting those kinds of plastic clamshells because of the market and call for “extremely low contamination rates,” adding that “cleaning the stream is absolutely critical at this time.”

Coffman said the WCA facility in Harrisonville isn’t making the money it used to on recyclables.

“To clean it up to a standard that we could ship it compared to where it was before, we’ve got $130 invested in a bale as far as collection costs and processing costs, and we’ll maybe get $80 out of it,” he said. “So we’re upside down fifty bucks on every bale of paper we ship out of here and we can’t ship it fast enough.”

WCA said it has so far found other markets and has not had to landfill recyclable materials.

The company said the value of recyclable materials used to offset the processing costs and allow for community rebates but no longer.

“As a result, free recycling containers at schools and churches have been discontinued and the region’s network of municipal drop off recycling sites has been nearly eliminated," the statement read.

“The rates are going up now,” he said. “That’s why you know they’ve started disappearing from churches and schools.”

41 Action News asked if and when recycling will cost residents more locally.

As for other municipalities or services, “I don’t think I can give you an honest answer to how soon that may happen,” said Howe.

“At this point, we really don’t know,” said Riggs. “Part of what we have to do is change our mindset.”