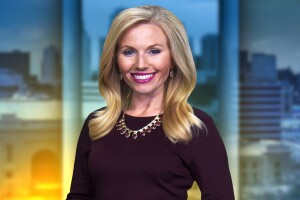 Lindsay's career has sent her across the country and around the world. In 2014, she traveled to Afghanistan where she embedded with Missouri National Guard soldiers to tell the story of the end of America's longest war.

Here at home, she's traveled to cover everything from F-5 tornadoes and hurricanes to high-profile court cases and March Madness. She did cover a great KU Championship on the road but she's a die-hard Mizzou Tigers, Royals and Chiefs fan!

Lindsay came to KSHB from WIBW. Being a reporter has been Lindsay’s dream since childhood. She got her first taste of television news right here growing up in Liberty schools.

Lindsay loves exploring hidden gems in her hometown and has never met a coupon she doesn’t like! She loves trying to learn new languages. Between Lindsay and her husband Sebastian, they speak four! They love to cook, travel, and play with their two rascally wiener dogs Ruby and Rocco.