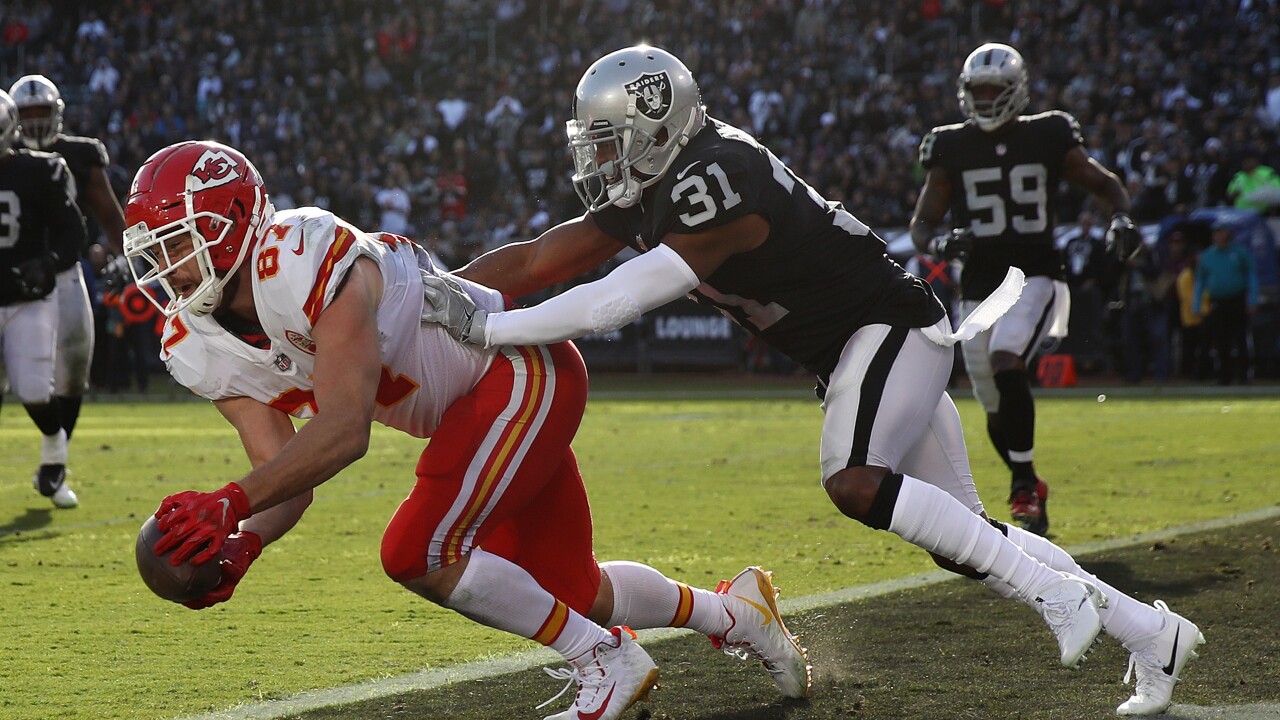 Ezra Shaw/Getty Images
OAKLAND, CA - DECEMBER 02: Travis Kelce #87 of the Kansas City Chiefs catches his second touchdown pass of the game against the Oakland Raiders during their NFL game at Oakland-Alameda County Coliseum on December 2, 2018 in Oakland, California. (Photo by Ezra Shaw/Getty Images)

KANSAS CITY, Mo. — The Kansas City Chiefs notched a tough victory against the Jacksonville Jaguars on opening weekend. The Jaguars are arguably one of the toughest front sevens the Chiefs will face in the first half of the season. It was a great early test to prepare the Chiefs for an opponent that doesn't have the same caliber in their front seven.

Oakland Raiders head coach John Gruden has tapped into the most effective way for Derek Carr to run his offense and move the sticks. Defensively, the Raiders are still a work in progress and were dealt two tough losses in news that rookie safety Jonathan Abram is likely done for the season with a torn rotator cuff. Cornerback Gareon Conley, who was carted off in Monday's game, remains a questionmark for Sunday's game.

The Chiefs will have a unique task this week with the loss of wide receiver Tyreek Hill, but there are ways the Chiefs can remain just as effective on Sunday.

1. Get the Raiders out of rhythm
Carr has found a groove in the Raiders offense this season. Gruden is calling plays that allow Carr to make two reads and get the ball out quick. He was the third fastest in week 1, having the ball out in 2.33 seconds. Patrick Mahomes had the ball out in 2.42, the fourth fastest of the week. Carr had a good pocket in the first game, allowing him to set up and feel comfortable if he needed more time for the routes to develop.

The Chiefs will have to attack the passing game in three ways. The first is disrupting the receivers' releases off the line of scrimmage or forcing Carr to take longer in his reads. Tyrell Williams and Darren Waller are Carr's favorite targets, and slowing their ability to complete their routes is crucial.

Second is interior pressure. The pocket must be collapsed in on Carr for him to begin feeling uncomfortable and returning to his poor habits of putting the ball up for grabs. If they are unable to collapse the pocket, they must get in his throwing lanes.

The final portion is showing blitz but dropping into zones of potential hot routes. Carr is looking for two things on blitzes right now. If there is a void he can exploit on a hot route and make an anticipation throw or is the safety gone over top so he can float it up to his receiver on a vertical route. The Chiefs can give him looks to force turnovers if the ball is coming out at the same rate.

2. Force the Raiders east and west
Oakland's run game is on quick hitting power runs. They aren't trying to force the backs to make cut backs or have to read. The Raiders want their offensive linemen knocking the defenders off the ball and creating a hole at the hole called. Oakland's offensive line is lacking in athletic ability to block sideline to sideline. They will get worn out over time if they are forced to maintain blocks at the line of scrimmage throughout the game. The ability to stretch the runs out should give the Chiefs a decisive advantage at controlling their desire to keep the down and distance in their favor.

3. Hard count
When Patrick Mahomes is on the field, the hard count can be his best friend. The Raiders front four lacks the discipline to stay onsides right now. They are going off of the first sound to attempt to gain an edge in their rush. Just like the Colts playoff game, the Chiefs can easily get the Raiders for multiple offside penalties and take full advantage of it.

4. Trips, bunches and four by one
The Raiders weakness in their scheme is against these formations. They struggle in coverage to quickly close the necessary ground and avoid being spaced out for easy reads at multiple levels. Kansas City can be very effective at getting the match-up they want at all levels out of these formations. The four by one overwhelms them the most because they routinely give up the one-on-one match-up on the opposite side and the middle of the field because of the spacing.

5. Off tackle and Jets
Defensively, Oakland is struggling to maintain the edge early in the season. The off-tackle runs look to be the most effective at this time along with misdirection jet sweeps. The key on the jet sweeps will be sealing off the edge with a tight end or providing misdirection in the backfield for the jet sweep. The four by one formation is also helpful in the off-tackle runs because it makes the edge easier to capture on the opposite side.

6. Dwayne Harris
The Raiders special teams ace is a concern that can't be taken lightly. Harris is a speedy returner and effective on all special teams coverage units for them. He is a difference maker in all aspects of special teams and must be accounted for otherwise he can be the key for a momentum swing.

The Raiders are an improved football team overall. They are a much crisper offense that understands their identity and sticks to it. Oakland has a good feel for where they are supposed to be and why. It is a matter of taking advantage of the current opportunities open with limited tape. Kansas City can come away with a decisive victory if they attack these areas.