City council to vote on barring prosecution of nonviolent protesters

An ordinance calling for charges against non-violent protesters to be thrown out has advanced to full council in Kansas City, Missouri. 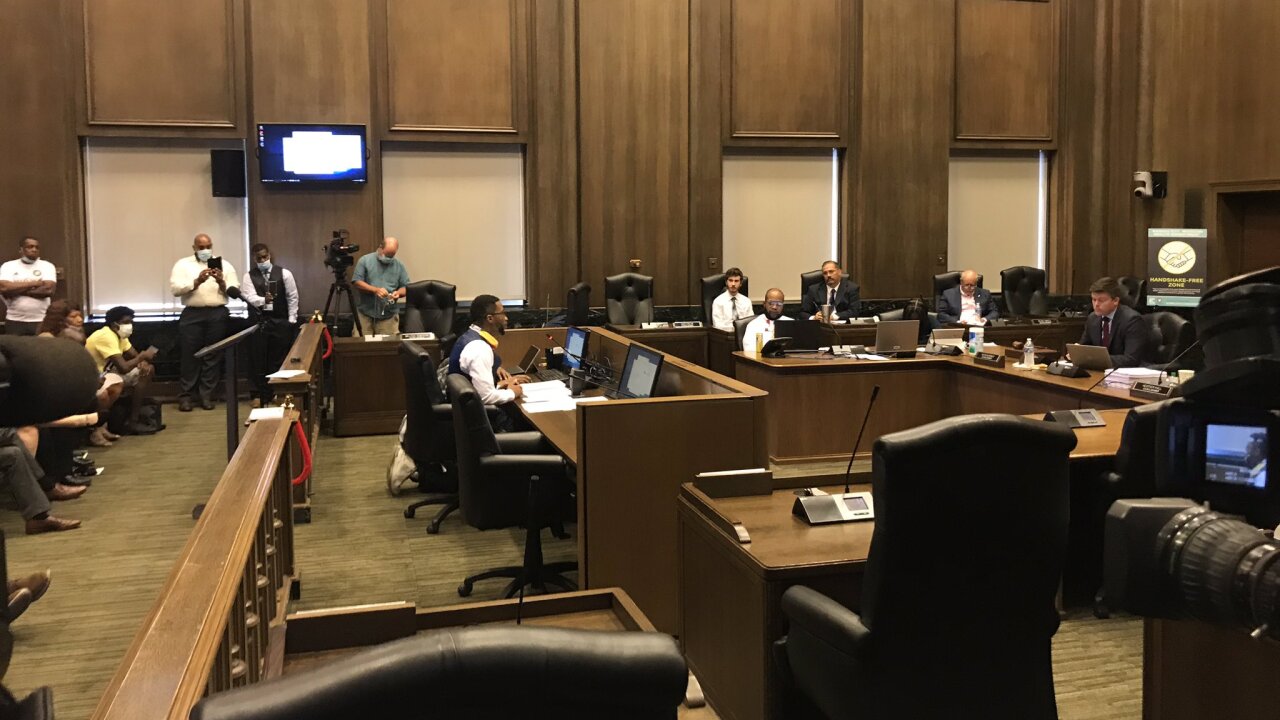 KANSAS CITY, Mo. — After more than three hours of debate and discussion, a Kansas City, Missouri, city council committee voted to advance an ordinance that would dismiss municipal charges against nonviolent protesters to the full council.

The ordinance, which is sponsored by Councilman Brandon Ellington, would exclude aggravated trespassing and property crimes.

The city already threw out the charges of people who were arrested only for stepping off the curb into the street.

The Special Committee for Legal Review's discussion was heated. Protesters and police officers' wives butted heads and even yelled at each other on multiple occasions during the meeting.

Most individuals in the room were activists and protesters who said they were tear-gassed, pepper-sprayed and shot with "non-lethal bullets" while peacefully protesting.

"Everybody here is uncomfortable," one woman, who is in support of the ordinance, said. "Everyone here doesn't feel good about what's going on. But if the police want to stop getting the heat, they need to start acting appropriately. They need to start serving the community that is paying them."

Many of the protesters said the police escalated the situation, pointing out that the protests were peaceful once the police pulled back after the first weekend.

"I've attended other protests on the Plaza, including the women's rights protest last year, and I was struck by how this was managed so entirely different than that one," another woman said. "If we are to move forward and build trust with our city's institutions, deescalation is an important part of this."

Overall, those in favor of the ordinance — which would forbid prosecution for alleged crimes not related to property damage from May 29 through June 2, when more than 150 people were arrested during protests near the Country Club Plaza — stressed to the committee that this cause is about addressing years of systemic racism in Kansas City and nationally.

On the other side, police representatives and officers' wives strongly opposed the ordinance.

Brad Lemon, president of the Fraternal Order of Police Lodge No. 99, said the city will regret making the decision in the future.

"There are all sorts of protests," Lemon said. "When we start talking about changing these arrests and handling these, down the road when there are individuals that you don't support that come out and start protesting, what are you going to do about those arrests?"

Others opposed said laws are laws, and we shouldn't bend them.

"You should be arrested if you break the law," one woman said. "You can't let criminals off and you can't just keep changing ordinances to appease the unruly protesters. When will it stop?"

One officer's wife handed the committee a stack of letters from people in opposition.

She went on to say that the wives are sick of having to defend their husbands' job and are sick of them being yelled at.

"We're here because we no longer feel safe in the city that we love," she said.

Another protester said black people don't feel safe every day, which is why they're protesting in the first place.