WOOD HEIGHTS, Mo. -- A small city in Missouri is making changes that some feel could lead to an increase in crime.

"I just think that priorities that are being made right now are probably not in the citizens' best interest," said Darren Hart.

Hart has lived in Wood Heights, Missouri for six years. He said he was stunned when he first heard the Wood Heights Police Department was being shut down. In an effort to fight back, Hart has rallied dozens of people together in the town of about 700.

"We just want to show the mayor and the aldermen, that hey, we're in support of the police department and what have you guys done here and we need to figure out a way to keep this if we can," said Hart.

On the morning of April 18, 2018, Wood Heights Mayor Robert Pettegrew told Chief of Police Jared Sartin that he would no longer have a job.

"Due to budget constraints to support infrastructure of the city, they were disbanding the police department, effective May 18," said Sartin.

Sartin has held his position since 2014. The department has a total of five part-time officers who work around 30 hours a week. Without them, Sartin said he is worried for the future of the Wood Heights community.

"I would expect an increase in crime. I hope that's not the case, but when there's no law enforcement around on a regular basis, you can only assume," said Sartin.

During the last City Council meeting, Sartin said the council approved $5,000 in purchases to replace garage doors at City Hall.

"I just shake my head. I don't know what to think. I guess garage doors are more important than law enforcement," said Sartin.

Pettegrew sent 41 Action News the statement that was given to residents of Wood Heights. It states the city is in need of more than $30,000 in infrastructure repairs.

Hart and other members of the community are making signs in support of the police department that read, "Save WHPD," "We Support Our Officers in Blue." 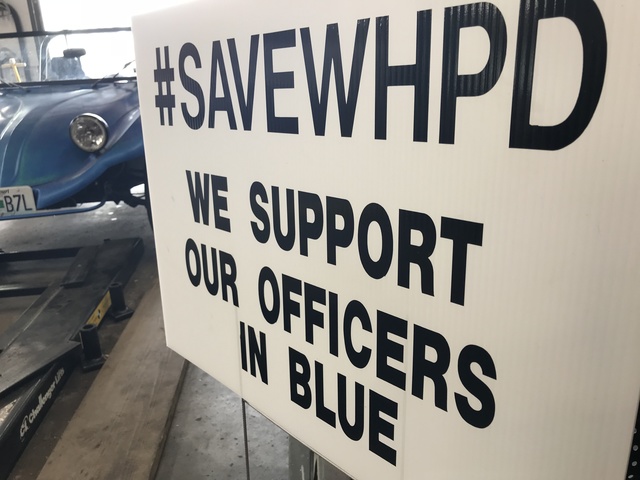 This weekend, Hart and other community members plan to display hundreds around town.

The community has also started a petition. Hart said they plan to present it during the next City Council meeting at 7 p.m. on May 21, 2018.