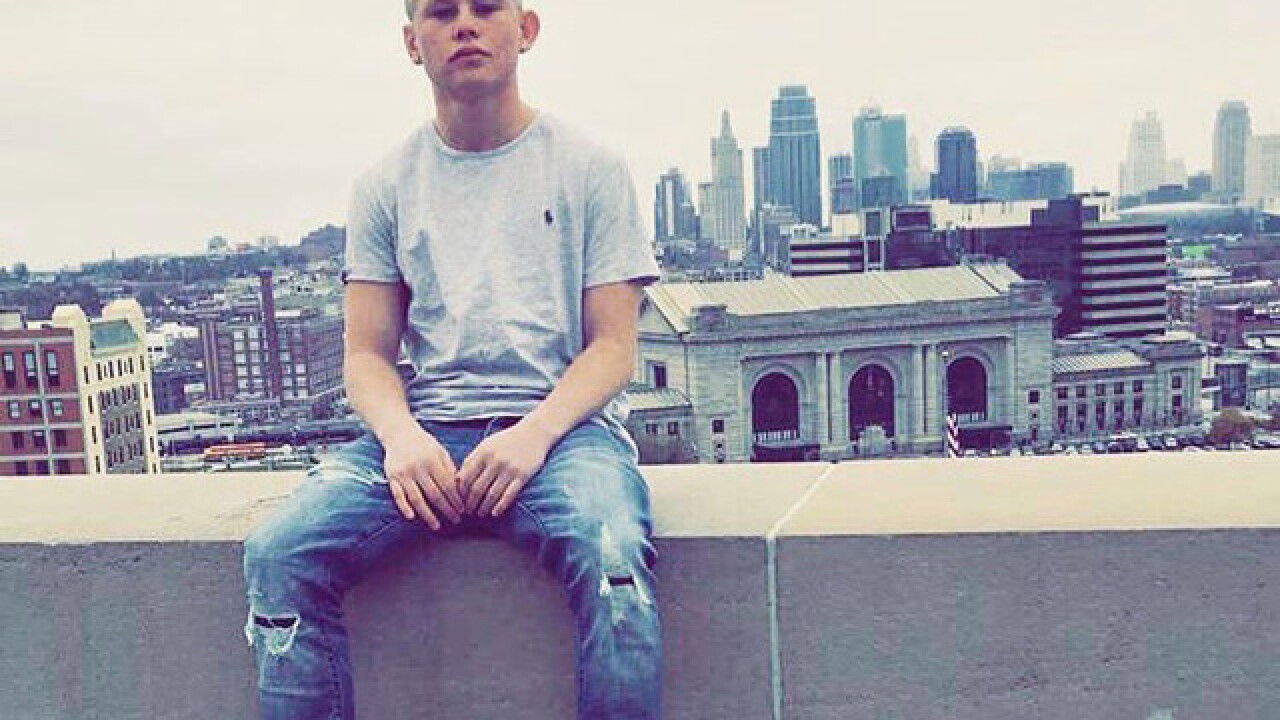 District Attorney Steve Howe said an officer was justified in opening fire on John Albers, 17, based on evidence that included police dash cam videos shared at a Tuesday news conference.

Last month, Overland Police responded to Albers home on a call that the Blue Valley Northwest HS student was threatening to hurt himself.

The DA's Office said the two officers walked up to the house, and dispatch told them that "mom" was on the way. A woman arrived at the scene and parked her car behind a police car.

The first officer walked to her car thinking it may be the teen's mother and learned she was a concerned friend. The second officer remained near the house standing in the front yard.

The DA's Office said the garage door to the house began opening. The second officer later told investigators he thought the boy's mom may have opened the door so that police could enter the house, and the officer walked up to the garage door.

According to the DA's Office, as the door opened, a minivan backed up toward the second officer. The officer drew his sidearm and shouted at the driver to stop the van. The command was loud enough to be picked up by another officer's in-car recording system a block away.

“One of the misconceptions is that if you're alongside of a vehicle you are no longer subject to dangerous which isn't even remotely true. One cut of the wheel one way or the other can take you down with the side of that vehicle,” Overland Park Police Chief Frank Donchez said.

The van stopped, and the officer lowered his pistol and began talking to radio dispatchers. The officer was next to the van at that point, the release said.

The DA's Office said the van accelerated in reverse, down the driveway, into the street, and performed what investigators described as a "J" turn. The van, in reverse and facing the street, backed over the curb, onto the grass, toward the house, directly at the officer.

The DA's Office said the officer went from a "position of safety" to being in the path of the accelerating van.

The officer began shooting. The DA's Office said the officer fired 11 more times. The van stopped, somehow got into neutral, and coasted down the driveway, across the street and into a neighbor's yard.

“He felt like he was the one who was going to get run over that the vehicle was going to strike him and believed that based on the evidence that we have available that was a reasonable belief and under Kansas law that will not face criminal charges,” Johnson County District Attorney Steve Howe said.

While police said two officers who are part of the crisis intervention team also responded, a so-called "co-responder" who is trained specifically to deal with mental health issues never made it to the address.

"Even if we had one on duty we needed to secure that scene before we send that person in again it was somewhat of a moot point as we were never able to communicate directly with Mr. Albers,” Donchez said.

Donchez added this tragedy has triggered the department to review its use of force policy.

“These are fluid and instantaneous decisions that a law enforcement officer must make which makes the job so difficult,” Howe said.

Donchez said the police officer in the video who fired the shots is no longer with the department. He resigned citing personal reasons.

The Overland Park Fraternal Order of Police Lodge 21 released a statement on the incident Tuesday:

On January 20, 2018, one of our Lodge members was involved in an Officer Involved Shooting Incident after being sent to assist a young man who desperately needed help.  That short incident changed the lives of everyone involved forever.  A Police Officer never wishes to be put in the situation where taking a life is necessary to protect their own, especially when that life belongs to a child.

We want to thank the Johnson County Officer Involved Shooting Investigation Team, the Johnson County District Attorney, and everyone else involved with this investigation for being professional, detailed and thorough. Our thoughts and prayers continue for the Albers family, the Blue Valley School District family, Our involved member, and for our other lodge members directly impacted by this incident.  We would also like to thank the public for allowing the investigation to take it’s course without incident.

We would like to thank Chief Donchez who has shown tremendous leadership to the men and women under his command.  His voice has been a voice of reason and calm throughout this ordeal.  Unlike other officials, who without facts or context, chose to spread misinformation, Chief Donchez chose to let the investigation play out in it's entirety before speaking to the media.

Our Lodge and it’s members look forward to strengthening and continuing our already strong bond with our community and citizens in Overland Park and the entire metro area.