Decisions loom for Chiefs as first part of offseason ends 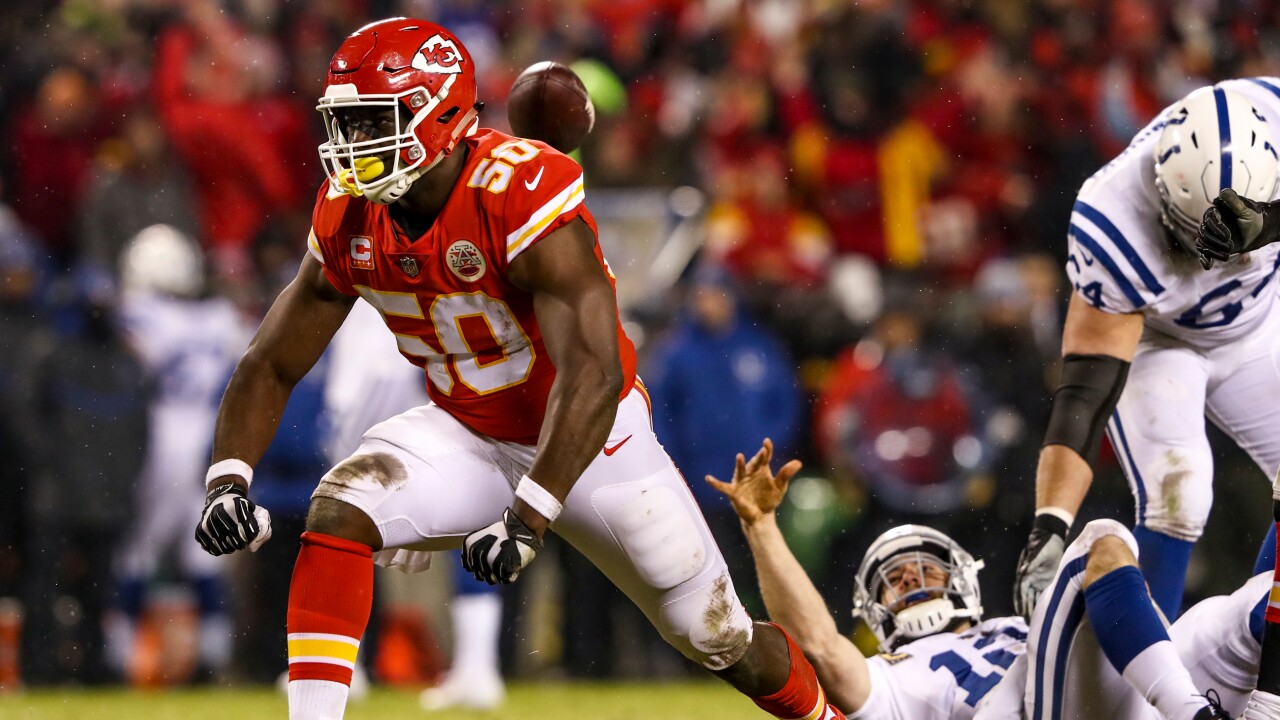 Jamie Squire/Getty Images
KANSAS CITY, MO - JANUARY 12: Andrew Luck #12 of the Indianapolis Colts tosses the ball after being sacked by Justin Houston #50 of the Kansas City Chiefs during the third quarter of the AFC Divisional Round playoff game at Arrowhead Stadium on January 12, 2019 in Kansas City, Missouri. (Photo by Jamie Squire/Getty Images)

KANSAS CITY, Mo. — The first phase of the offseason is now complete with the Senior Bowl, East West Shrine Bowl and NFL Combine in the books.

Kansas City Chiefs General manager Brett Veach, his scouting department and the coaching staff are starting to transition into the next wave of the offseason, where the Chiefs will finalize which players to retain, where they target improvement through free agency and attending the pro days of upcoming draft prospects.

The Chiefs will likely have to make some tough roster decisions in creating cap space and electing not to retain some recognizable names. Here are some potential scenarios that can help them maximize their cap flexibility and who the Chiefs should retain.

Houston has been unable to perform near the level of his contract year in 2014 when he tallied 22 sacks in a season. The former third round pick hyper-extended his left knee three months after signing his new six year, $101 million contract with $52 million guaranteed. Houston appeared unable to regularly regain his contract year form after his offseason knee surgery.

He has not appeared to get back his ability to change directions and explode during his lateral movement. Houston's run defense also appears to have decreased as well. The Chiefs are paying for a defender that no longer can produce at the level they are paying him. The Chiefs will likely have to release him in the coming weeks if a team is unwilling to take on his $14 million dollar cap hit.

Ford is at a age where the Chiefs likely can't justify paying an edge rusher that will be 28 this season, with a previous back injury and has lacked sustained success during his career. The former 2014 first round pick has been inconsistent and didn't reach his full potential until a contract year was on the line.

Now is the time for the Chiefs to get a their best return on Ford through a trade. Ford could play the weak side defensive end for the Chiefs scheme this season but his struggles in run defense make him a weakness in the front seven.

Berry's return from his battle with cancer to have a contract season in 2016 while playing on the franchise tag netted him a $78 million contract ($40 million guaranteed) from former general manager John Dorsey. Berry sustained an Achilles injury in the first regular season game after signing the contract and has yet to play in three consecutive games since.

The Chiefs can designate the former first round pick as a post June 1st cut once the new league year begins on March 13th and can spread the dead money over two seasons. On the field this season, Berry was unable to regain his explosion when changing direction and closing on defenders. He looked comfortable attacking the line of scrimmage in a straight line but any change in direction by the ball carrier showed a drop in his ability to recover and close the ground.

The key dates for Berry's future will be between March 13th at 3 p.m. CT until March 15, when $7.25M of Berry's base salary becomes guaranteed on that day. Teams likely wouldn't take him on in a trade at his cap figure and previous injury.

Sorensen's skill set likely isn't a fit for the defensive scheme change. He is a run defender that is beginning to show a drop in an ability to athletically cover defenders following a knee injury in training camp. The Chiefs will need to eat the dead money now to regain cap space now and in the near future for other signings on the horizon.

Williams may not have the athletic ability to run the twist, games and stunts that will be routinely added in the Chiefs pass rushing attack this season. His cap savings might be needed in a pinch if the Chiefs are unable to quickly resolve the financial situations with Houston, Ford and Berry.

Murray would be another way to quickly add cap space to sign a player to a short term contract near vet minimum if the organization feels he can't contribute to the new scheme.

Sherman brings a strong work ethic to the roster in both his ability to block, his attitude and his contributions on special teams. He is arguably a key contributor in short yardage blocking situations and a great grasp of his role in the offense.

Devey has the ability to perform effectively at both the guard and center positions. He improved the interior of the offensive line during his time on the field until he sustained a torn pectoral muscle in late October. He is quality depth and a serviceable starter at a reasonable price.

Allen was a good addition for depth at a time when the team was beginning to sustain some serious injuries in the interior of their offensive line. He saw some time at left tackle and left guard during the season and provides the roster with quality experience and depth. He would benefit from a full offseason training program with one organization.

Lucas showcased the athletic ability and range to deserve snaps at the free safety position but was unable to receive them under Bob Sutton. The Chiefs can place one of five tender options on Lucas with cheapest being a right of first refusal at $2.025M. Lucas would likely benefit under the guidance of Dave Merritt and Sam Madison along with a more aggressive scheme under Steve Spagnuolo.

All three players are under the age of 26 and should come at a good rate for their production.

The Chiefs need to get younger and faster along the defensive line and Bailey will turn 30 this month. Bailey can provide a team a quality bull-rush defender, but financially, the numbers likely don't fit on a contract he can receive on the open market.

Nelson is hitting the market at an ideal time in his career. The free agency market will not have a strong group of cornerbacks available. Nelson could provide another team a serviceable slot corner that still needs to master turning his head around and tracking the football before it reaches the receiver.

Morse struggled to regain power in his drive step after having surgery on his foot after the 2017 season. He also missed multiple games this season with a concussion. Morse plays with a nasty attitude and is a great chip blocker. He appears to be out of position as a center and would benefit from playing guard in another scheme. Morse can join the market in a weak interior free agent class and find himself making top-dollar at his position.

Conley struggled with translating his combine workout numbers to the football field. He lacked consistency catching the football at times this season and routinely couldn't create separation from opposing corners before his Achilles injury. The Chiefs will likely need to search for a replacement that has the ability to explode when changing direction.

Ware made a tactical move by delaying this day when he adjusted his contract headed into the 2018 season. He was unable to regain his form after his knee injury during week three of the 2017 preseason. Ware still has some power and straight line speed left in his game but his ability to change directions and burst have yet to return.

The Chiefs have arguably yet to receive a full return on the five years they invested in the basketball project player. Harris has good athletic ability but his lack of focus with routine drops of the football and his inability to master run blocking have hampered this team long enough. The Chiefs need to find an upgrade at the position.

Thomas provided the team with a quality gunner during his time on special teams but sustaining two broken leg injuries likely ended his time in Kansas City.

West appeared to lose his burst during training camp in 2018 and later sustained a concussion in training camp. After the Kareem Hunt incident, the team was able to bring him back at a reduced rate, but he didn't provide much of an routine impact to the run game. West lacks the vision to succeed in the Chiefs run game, but has some elusiveness as a pass catcher in the open field. He could potentially extend his career in the league by attempting to make a transition to wide receiver if he is unable to find home at running back on the market.

Charvarius Ward's elevation to the starting cornerback position was arguably the writing on the wall for Scandrick's time in Kansas City. Scandrick tied for second in individual penalties on the team with Steven Nelson at 11. Cameron Erving finished first on the team with 12. Eight of Scandrick's penalties were defensive holds. He had visibly lost some of his speed on breaks in the route and would hold the receiver to maintain favorable position.

Zombo was brought back to help on a depleted special teams unit because of injury and as depth in run defense on the edge. He served his purpose but isn't a fit for the new scheme.

The Chiefs became the third team for Benjamin in two seasons at the time of his signing. NFL teams aren't in the business of letting quality receivers go. Benjamin was a sloppy route runner before he came to Kansas City and it didn't appear to improve much on tape during his limited snaps in the offense.

Smith is coming off a knee injury and struggled to find a role outside of special teams. The Chiefs would be better suited to allow Ben Niemann and Raymond Davidson see those reps during OTAs.

Kemp was unable to make an impact in the offense and struggled to tracking the football and down quality punts by Dustin Colquitt on special teams. His routine mistakes as a gunner on special teams isn't worth bringing back.

If the Chiefs are able to move on from the players mentioned in the tough decisions section, they would regain nearly $44 million in cap space short term and an additional $29 million long term. Here are the Chiefs long term cap situations with a project $200M dedicated towards the cap in 2020-22. The Chiefs will have potential big contracts for Patrick Mahomes, Tyreek Hill and Chris Jones on the horizon.

Players' 2018 contracts officially expire on March 13th at 3 p.m. CT. If the Chiefs want to add significant impacts to their roster, they will need to clear some space in the next few weeks.

Although it might be the offseason, you can listen to the 4th and 1 podcast each week with Tod Palmer and Nick Jacobs on Apple Podcasts , Stitcher , Spotify and TuneIn. You can also find Nick on twitter @Jacobs71 .

You can also find all the 41 Action News podcasts at kshb.com/podcasts