KANSAS CITY, Mo. — Parents of students in the Park Hill School District want the district to slow down its redistricting plans.

Several parents contacted 41 Action News after the district held an open house for public feedback Wednesday. Their chief concerns included enrollment levels and a lack of a socio-economic balance among the elementary schools.

"We want every student to have an equal opportunity to be successful and if there's a balance there's more of an opportunity for that. There's more resource allocation for that," said Meredith Suarez, whose son attends Southeast Elementary School.

Because the Park Hill School District is growing, the district is building a new elementary school and a middle school.

There are currently four re-districting proposals, which, according to the school board, took the following criteria into consideration:

"We know that you're not going to make everyone happy in redistricting. We know it's a really hard job," said Rob Edwards, whose son attends Southeast Elementary School. "We don't do enough to manage or bring down the overall enrollment levels in the elementary school level and we don't do enough to balance the socio-economic levels."

Under the four redistricting proposals, the percentages change and disparity grows. 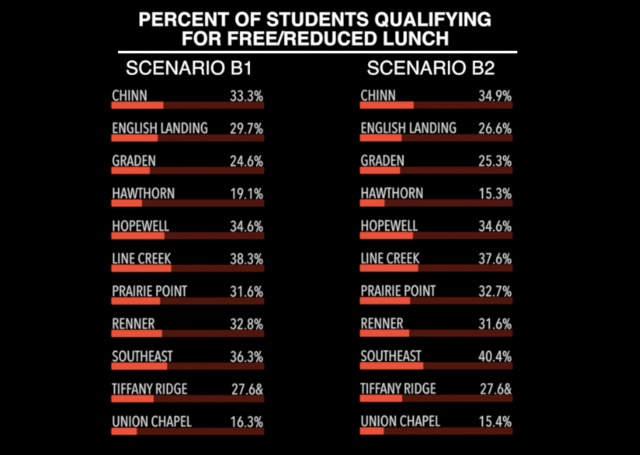 "We go to Southeast Elementary. We love that school. We love the teachers, the facilities, the environment. We love the diversity of the students. That being said, pushing and maintaining over-enrollment and creating greater economic disparity isn't an outcome we would like to see in the redistricting process," said Edwards.

41 Action News spoke with the Nicole Kirby, the school district's director of communications, on Wednesday during the open house.

She said, the redistricting committee has "been going through and drawing lines for the high schools, middle schools and elementary schools and they found it's a really difficult thing to do that."

"We definitely want to hear everybody's feedback," she said.

Park Hill started its redistricting process on June 7, 2018, when the school board created criteria, a timeline and laid out rules for a committee formation.

Another open house for public feedback is scheduled for Nov. 29, 2018, with the board scheduled to vote on the committee's recommendation a week later.

Edwards and Suarez have both signed an online petition asking the district to delay a decision, in order to give parents and the committee more time to analyze the redistricting proposals.