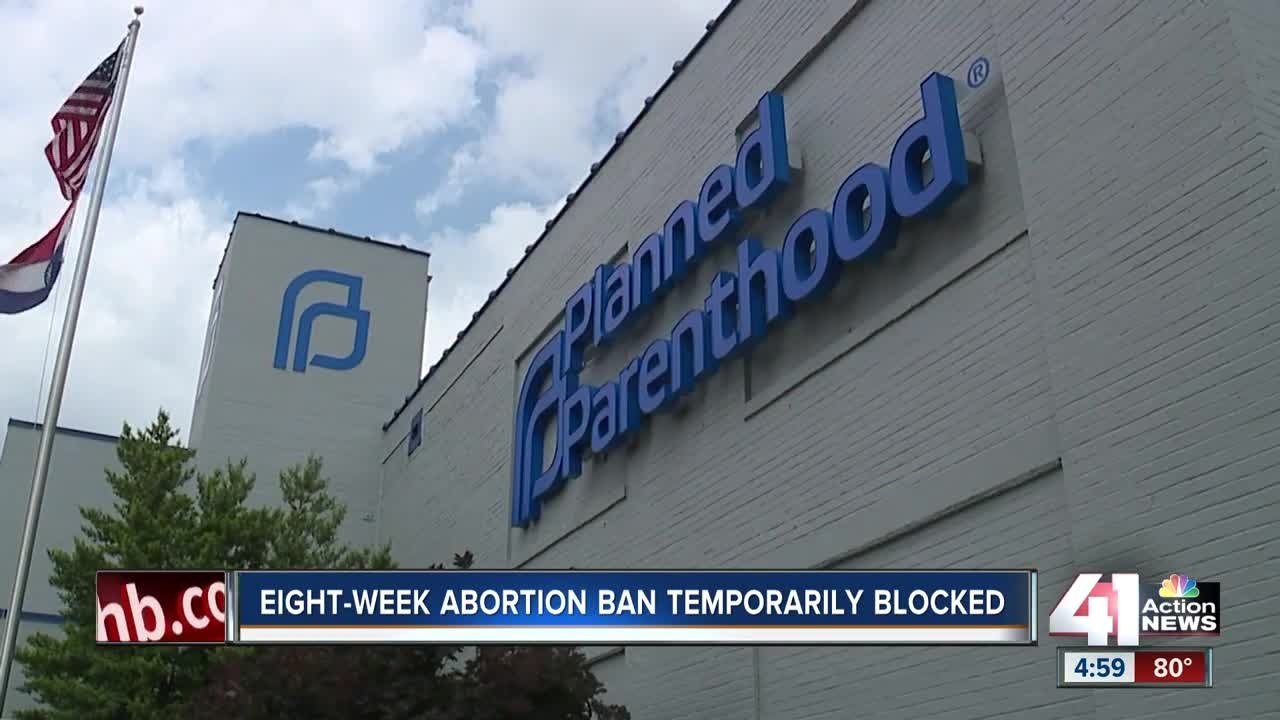 KANSAS CITY, Mo. — A new Missouri ban on abortions at or after eight weeks of pregnancy won't take effect Wednesday after a federal judge temporarily blocked it from being implemented.

U.S. District Judge Howard Sachs put a pause on the law as a legal challenge against it plays out in court, which could take months. He added that Planned Parenthood and the American Civil Liberties Union of Missouri likely will succeed in their lawsuit alleging that the law is unconstitutional.

Similar laws have been struck down in North Dakota and Iowa.

Missouri already has some of the nation's most restrictive abortion regulations. A clinic in St. Louis is the only one in the state that performs abortions.

Sachs' ruling says allowing the eight-week abortion ban to be enforced would have blocked about half of reported abortions in Missouri. The judge wrote that it would amount to "significant interference with plaintiffs' service and the rights of its prospective patients."

The law includes exceptions for medical emergencies, but not for rape or incest.

"We are encouraged that today’s court ruling upheld the anti-discrimination provisions of the law, and we look forward to litigating the remaining issues," Missouri Gov. Mike Parson said, in part, in a statement from his office.

Missouri lawmakers expected a court challenge and included a series of less-restrictive bans ranging from 14 weeks up to 20 weeks in the measure in hopes that one would be upheld. But it's unclear if any of the bans on abortions before fetuses are viable outside the womb, which can be from 24 to 28 weeks, will stick.

Sachs wrote that it's "highly likely that the listed weekly time limits on abortions will be ruled invalid."

He will allow one portion of the policy to take effect: a ban on abortions based solely on race, sex or a diagnosis indicating the potential for Down syndrome. He wrote that abortions based on Down syndrome would be "somewhat rare, given the window of time needed for adequate testing and consultation."

Planned Parenthood vowed to fight to block that portion of the law, too.

"Although we are grateful today's ruling allows us to provide care to some Missourians, we will continue to defend the truth: EVERY reason to have an abortion is a valid reason," said Colleen McNicholas, chief medical officer for Planned Parenthood of the St. Louis Region.

The decision to allow that portion of the law to be enforced was lauded by Republican Attorney General Eric Schmitt, whose office is responsible for defending the law in court.

"As the father of a child with special needs, Attorney General Schmitt is particularly sensitive to suggestions that an unborn child who will have special needs is any lesser of a human being, and we're glad that provisions relating to that issue were left in place in the judge's ruling today," spokesman Chris Nuelle said in a statement.

Attorneys for the state can appeal Sachs' ruling. Nuelle said the attorney general's office is reviewing the full ruling and determining what steps to take next.

State attorneys have argued that courts have allowed limits on abortions based on the gestational age of the fetus. In court documents, they told the judge that the state's goal is "protecting fetal life" as well as protecting women. During a court hearing Monday, Missouri Solicitor General John Sauer's argument centered on his contention that Planned Parenthood and the ACLU do not have standing to challenge the law.

Missouri's law also includes an outright ban on abortions except in cases of medical emergencies, but that would take effect only if Roe v. Wade is overturned.

The St. Louis Planned Parenthood affiliate clinic, the only one in Missouri that provides abortions, is fighting to have its license renewed. The Missouri Department of Health and Senior Services refused to renew the St. Louis clinic's license in July, saying inspectors found several problems in March that included three "failed abortions" requiring additional surgeries.