KANSAS CITY, Mo. — The owners of the former Westport High School are hoping it’s chosen as the place UMKC builds its next conservatory.

Bob Berkebile, one of the leaders in Kansas City Sustainable Development Partners, said they bought the high school about two years ago and wanted to transform it into something special. The company also helped build the Plexpod Westport Commons currently in the former Westport Middle School and now has more than 400 partners.

Berkebile thinks the former high school is the perfect spot for the proposed UMKC conservatory, as the structure is already in place.

"That’s one of the advantages, if you think about the conversion, ironically these have the volume of a lot of the things they need," he said.

The new conservatory could cost upwards of $100 million, and Berkebile said UMKC could get the most bang for their buck with the high school.

"What we’re starting with is extraordinary and that’s a real advantage, so with a lot of luck maybe it will be less than that and it will probably be, certainly probably be less than trying to do it new on campus or new downtown," he said.

As another draw, Berkebile pointed to the open theater as another reason UMKC should choose them.

"We like the physical space. If you look at this theater, while the technology is old and we would certainly, and if the university is here, would introduce new technology, the proportions and the daylight are almost impossible to recreate today," he said. 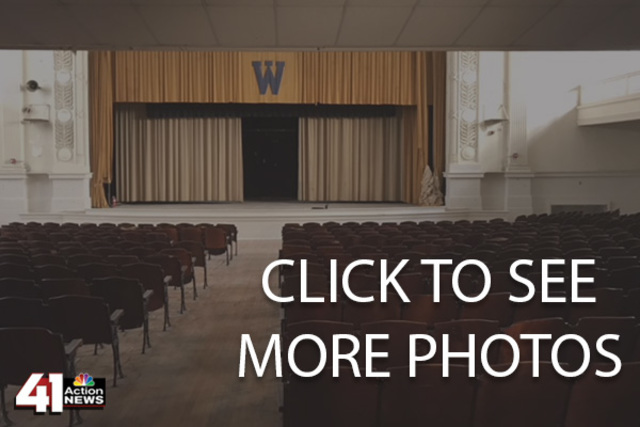 The high school closed down in 2010 and has since been vacant.

The plans for the UMKC conservatory hit a snag when then Gov. Eric Greitens didn’t allow the state to provide half the funding for the building, but current Gov. Mike Parson said he favors the additional funding, spurring new hope the conservatory will be built.

A couple sites downtown, including the Barney Allis Plaza, are also being considered for the proposed conservatory.

UMKC said all the Request For Interest applications are due by July 24, and they will decide where the conservatory will go.