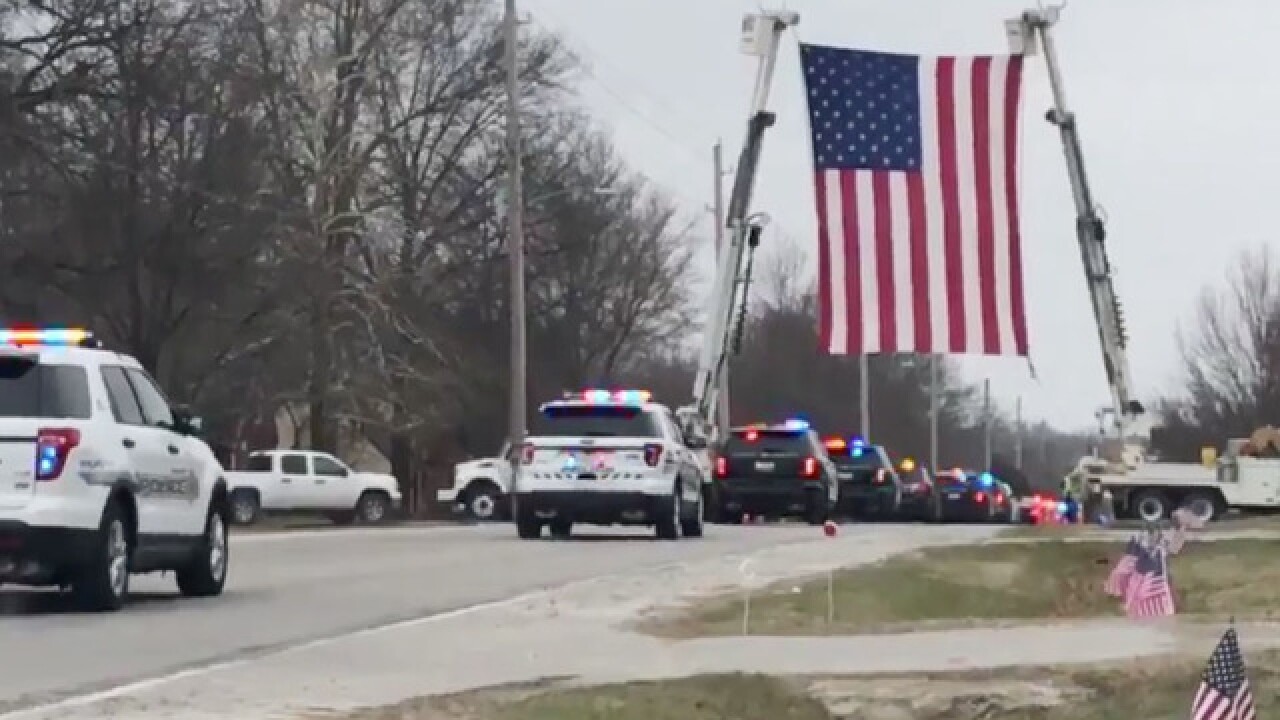 CLINTON, Mo. — Family, friends, law enforcement, the Clinton community, and strangers gathered to say goodbye to Ofc. Christopher Ryan Morton. He was shot and killed in the line of duty Tuesday, March 6.

Outside Morton's funeral services, the Patriot Guard Riders lined the perimeter of the Benson Convention Center. They attended to honor a man who dedicated his life to serve his community and defend his country.

Lindsey Thompson and her 8-year-old Kaylen were among the hundreds who drove to Clinton to say a final farewell to Morton.

"It's sad but beautiful, you know, watching everyone come together," Thompson told 41 Action News.

Thompson, from Stafford, Missouri, also came to capture "the emotion and love and support that everyone has for Officer Morton, for his family, and the police department," she said.

The fellowship that makes up the thin blue line turned out in full force Monday to pay their respects at Morton's funeral.

While the dignitaries expressed their condolences, those closest to Morton gave us a glimpse of the man behind the badge.

"Tara called Ryan her 'Flower Child,' said he would blossom wherever he was planted," Brian Bennett, Morton's uncle, said during his eulogy.

“For those of you that knew him as we did, there were stories to be told,” Bennett said.

He said Morton never met a stranger. Bennett said Morton would go to a baseball or football game and disappear, sometimes for hours, when getting drinks because he would meet and talk with people in line.

One of Morton’s best friends, Officer Derek Foreman, also spoke at his funeral.

“Ryan was one of a kind,” Foreman said. “He would’ve given his shirt off his back for anyone.”

Foreman remembered a call he and Morton were on with a military veteran who was having a bad day. The veteran was dealing with PTSD and just needed to talk. Foreman said Morton comforted him and gave him a shoulder to cry on for more than an hour.

Foreman said one of his favorite things was to go to Chiefs and Royals games with Morton. He said Morton disappeared for almost two hours at a Chiefs game because he met a random couple and he just wanted to talk with them.

“He came back to the seats with their entire life story and some selfies,” Foreman said. “He insisted he needed to take those with him.”

"Ryan was a positive person and would not want us to be sad today. If he were here, he would tell us to cheer up," Foreman said. "He'd tell us to smile and remember all the great memories we'd all shared together."

The prayer and the promise

Lynch then said the promise from him, Chief Miller, and other officers.

“We came after you that night, but we were too late. We will come again. We’ll come one at a time, but we’ll come. Find Gary and wait for us, brother. We will come. We will not quit.”

Missouri Gov. Eric Greitens was invited to speak at the funeral.

He said Morton made the ultimate sacrifice for the safety of his community and remembered the day just seven months ago when he spoke at the same center for Officer Gary Michael’s funeral.

He admired Morton for stepping up in Clinton’s time of need.

“When Officer Michael gave his life, Officer Morton stepped in the gap. He stepped forward to serve. And those two warriors are together now, in the company of God, who’s called his sons home,” Greitens said.

Greitens also said he had come to know the Clinton Police Department and community well in the last seven months and grieved both losses with them.

“It’s because they are men and women of so much strength and wisdom and courage, that it grieves us so much when they leave us. We mourn Officer Morton. He was a faithful servant to all of us,” Greitens said.

Greitens also recognized the two officers who were injured in the same incident in which Morton was killed, Officer Battencourt and Officer Casper, and thanked them for their service that night along with the dozens of other officers who responded to the scene.

Greitens concluded his speech by saying, “May God bless Clinton, and may God bless Officer Ryan Morton and his family.”

One portion of the letter read, “Your son willingly risked his life each day to protect his city, state, and country… Although he was taken from us far too soon, I have no doubt that Ryan’s legacy of selflessness will inspire all those who knew him in the months and years to come.”

Roger Brant is the former pastor of the Heartland Church, where the Morton family attended church.

Brant said those gathered at the funeral knew Morton as an officer, friend, and a member of the community.

"Ryan was a hoot," Brant said. "He had this perpetual, infectious smile."

Brant said he always thought Morton must be up to something "because no one smiles that much unless they're really happy or really mischievous," and he thought Morton was both.

"Generally people don't want you to see the real them; I never saw Ryan in that light," Brant said. "He always was who he was."

"Becoming an officer or serving his country was not what he did; it was who he was," Brant said.

Following the funeral services, a display of patriotism and support lined the procession route to Morton's final resting place.

Watch the full funeral service below: