Get a taste of an Olympic sport with KC Curling Club

KANSAS CITY, Mo. — Voices barking instructions bounce around the ceiling of the ice rink. Sounds of brooms scratching and stones gritting across the surface echo in the arena, too.

“Curling is sort of like shuffleboard on ice,” explained DeeAnn Moore. “It’s a great workout and a great social experience.”

Moore is the president of the Kansas City Curling Club. The group holds leagues and learns to curl in the Northland.

“We curled at Crown Center just for the first two years,” remembered Dennis Cavinaw, who started the club back in 1987.

“It’s come a long way. We’ve had some ups and downs, but every Olympic year we always see more of an interest. Two to three hundred people come out to curl,” he said.

Ko Wang has been curling for the past two years. She moved to Kansas City from Canada, where curling is extremely popular. A co-worker asked her to try. She got the bug.

“It's really challenging at first, but once you start playing consistently you really learn the game,” said Wang.

“It's a Scottish sport. I used to curl in shorts so I said going to a kilt was just sort of natural. Now, I wear a kilt and some other members kind of followed,” he said.

There are four players on a team. Each player takes turns sliding a 42-pound “rock” or “stone” across the ice aiming for the center of a bullseye on the other end. Two other members use brooms to affect the ice in the path of the stone. 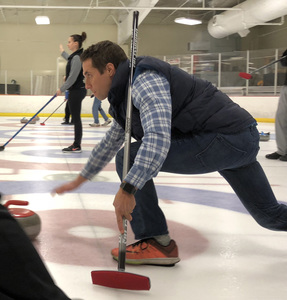 “You can move a stone sometimes 6 to 10 feet depending on how you sweep,” explained Cavinaw.

Kristy Filippini loves a “takeout” move when a player hits the stone of the other team to knock it out of position.”

“I lived in Duluth, Minnesota and one of my former co-workers, whose husband won a curling bronze medal in the 2006 Olympics, she came up and said I need another female for my women's team," she said. "I’ve been playing ever since.”

Every time the Olympics roll around she loves watching Team USA and the added attention to her sport.

She laughed, “I’ve had the fortunate experience to curl with all but two Olympians representing the United States. It’s fun knowing I’ve lost to these people!”

The club is holding more sessions for people who want to learn how to curl. Visit www.kccurling.com