Route would connect two cities in under 30 minutes

Missouri is one big step closer to a possible hyperloop that could carry passengers across the state in minutes instead of hours.

KANSAS CITY, Mo. — Missouri is one big step closer to a possible hyperloop that could carry passengers across the state in minutes instead of hours.

Virgin Hyperloop One released findings of a feasibility study Wednesday that the company said confirmed Missouri’s potential route, which would connect Kansas City, Columbia and St. Louis, is a feasible and viable option.

“This is the first feasibility study to come out in the United States, which is a huge step,” said Ryan Kelly, head of marketing and communications at Virgin Hyperloop One.

Local officials said that excitement for the potential project is building.

“I hope people get excited about this,” said Ryan Weber, president of the KC Tech Council. “KC, St. Louis and really the Midwest, we’re leading on a global project here.”

While visiting the company’s Nevada test site this spring, 41 Action News learned why Virgin Hyperloop One believed Missouri had a good chance at getting a route. Those reasons include connecting two major cities with a stop at a university along the Interstate 70 corridor, which provides a relatively straight shot.

“I-70 allows us to really dig into that particular route, which is very unique for us,” said Dan Katz, director of global public policy and North American projects at Virgin Hyperloop One.

“If you can go along the interstate with a hyperloop, you solve a lot of problems," Katz said. "You have your right-of-way controlled by the government. You don’t have to take private land.”

Other key findings released in the company's study include an 80 percent increased demand to travel between Kansas City and St. Louis.

The study estimates traveling from Kansas City to St. Louis would take as little as 28 minutes, and tickets would cost about $30 each way — cheaper than the gasoline it would take to drive there. A trip to Columbia from either city could be as quick as 15 minutes.

All that saved travel time could translate to people saving $410 million per year, according to the study. More savings could also come from fewer accidents anticipated on I-70.

The study also said that Virgin Hyperloop One’s linear infrastructure costs would be about 40 percent cheaper than existing high-speed rail projects, though company officials stressed that does not include costs for the hyperloop stations or portals. Next steps in the project include determining where those portals would be in each city and what they might entail. 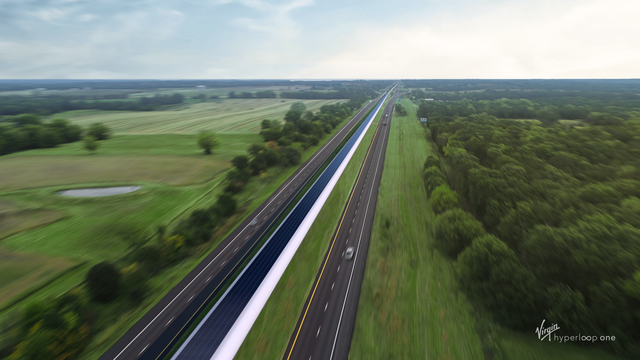 Other unanswered questions are how much the total project will cost and who will pay for it.

“Everybody wants to know, 'what is this going to cost?'” said Weber, who is a part of the Missouri Hyperloop Coalition. The coalition, which recently visited the company's test site, now faces the task of figuring out how to finance the potential project.

“It is fair to assume this project will have a ‘B’ in front of it. It will be in the billions,” Weber said. “We have an idea, but the next step is to really look at what amount of capital needs to be raised to begin projects like the construction phase.

"That’s a big number but this also is a system that’s going to have to make money," he said. "The people who will be investing in this, companies, global investors and maybe the state as well.”

Weber said figuring out the financial side of the project will likely take more than a year. Virgin Hyperloop One anticipates that riding in a hyperloop pod in the United States is still years away, but hopefully not that many.

“We’re hoping to get the first systems up and running by the mid 2020s,” Kelly said. “I think for the United States, that is very ambitious, but we would like to see it in the next couple of years, not decades. We’re hoping that before the end of this decade, we can get something up and running."

The company is also part of other feasibility projects across the country, including in Ohio and Colorado.

Contributed to DocumentCloud by Web Department of KSHB.com | 41 Action News • View document or read text
Copyright 2018 Scripps Media, Inc. All rights reserved. This material may not be published, broadcast, rewritten, or redistributed.