I-470 project expected to cause major traffic delays

The Missouri Department of Transportation will begin bridge work on the I-470/I-70 interchange soon, and that is expected to cause major traffic delays.

KANSAS CITY, Mo. -- The Missouri Department of Transportation will begin bridge work on the I-470/I-70 interchange at 8 p.m. Friday, and that is expected to cause major traffic delays.

According to MoDOT, delays could reach up to 75 minutes during the height of rush hour and even more if an accident occurs. During construction, crews will be fixing the bridges on the I-470/I-70 interchange, the 40 Highway bridge, and the Little Blue River Bridge. This will complete the I-470 rehabilitation project that began in 2017.

"This project on I-470 is rehabbing many of our bridges throughout this whole area," said Ryan Kneib, intermediate construction inspector for MoDOT. "There are 15 structures involved. Once the bridges are done up in that area [I-470/I-70] that will be the end of the bridgework on this project. There will only be minor touch up and finishing items like striping and rumble strips."

Preparation for this portion of the project begins this weekend.

On Monday, August 13, MoDOT will close the left lanes of NB & SB I-470 between 39th Street and the Little Blue River (just south of 40 Highway). This stretch will be down to one lane and may cause weekend delays.

Later, crews will again have intermittent lane closures along I-470 for striping and barrier work. This will last through the weekend. 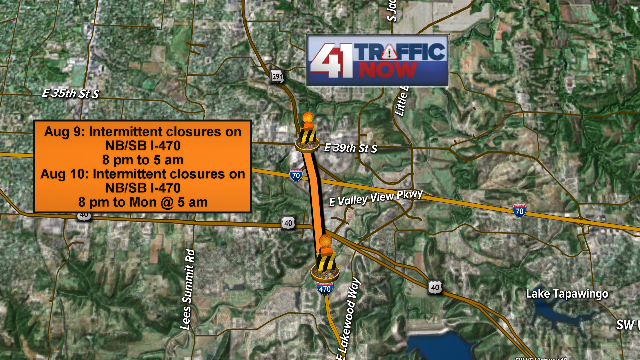 MoDOT warns that all loop ramps at the interchange between I-70 and I-470 may close as early as August 10. These will remain closed through early September: 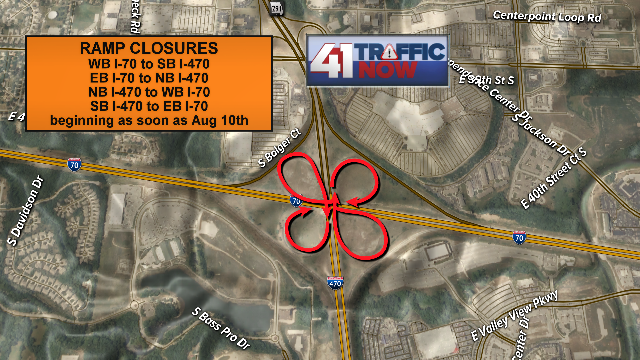 The bridge rehabilitation project will officially begin on August 13, which is when crews will close the outside lane of NB/SB I-470 between East 39th Street and the Little Blue River Bridge until approximately early September.

"It's going to be a very big deal," said Kneib. "There's less room to do the work and less room for people to travel. Any of the interstates or highways would be great alternates. Some notable ones would be 7 Highway, 350 Highway, and I-435 if you are a little further away from it."