Brides say hair and makeup artist left them at the altar 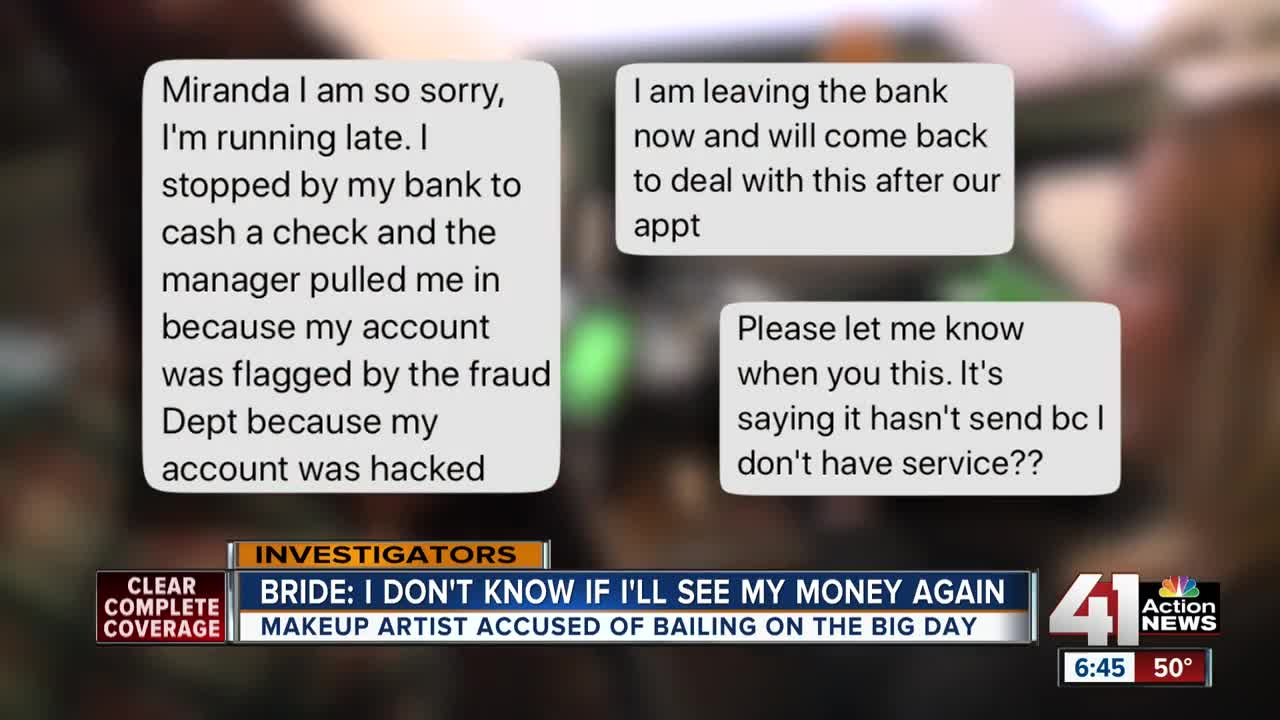 It's supposed to be one of the happiest days of your life. But brides told 41 Action News they spent their big days stressed out because their hair and makeup artist didn't show. 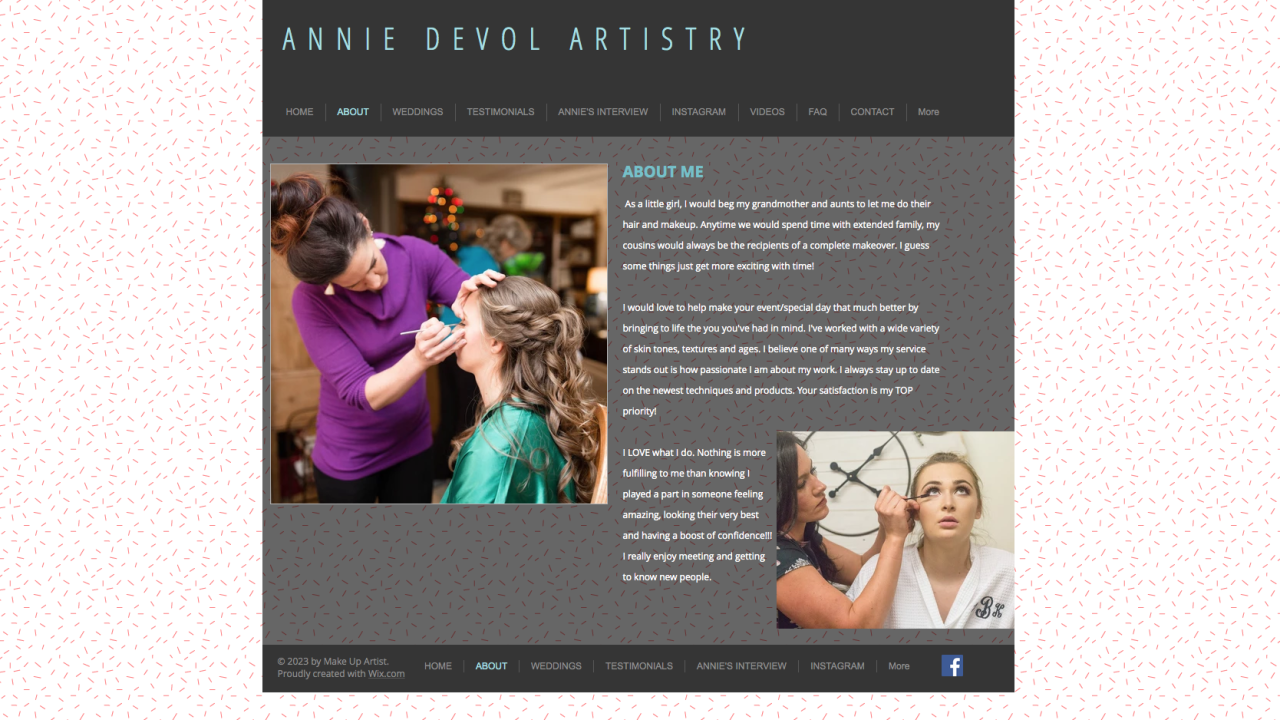 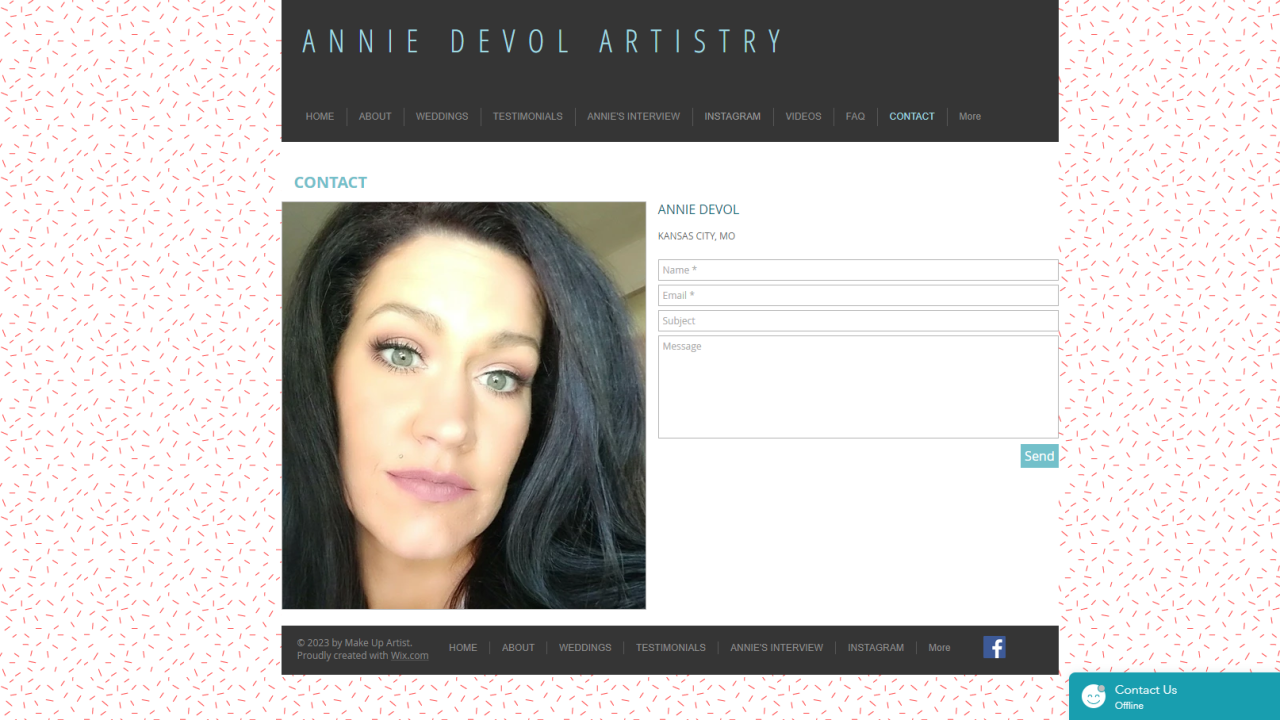 KANSAS CITY, Mo. — It's supposed to be one of the happiest days of your life. But brides told 41 Action News they spent their big days stressed out because their hair and makeup artist didn't show.

One of those brides was Miranda Reeves, who started planning her wedding last summer. While searching online, she came across Annie De Vol Artistry.

“She had great reviews,” Reeves said, “and so I ended up messaging her, asking what her quotes were.”

Impressed by her work, Reeves booked De Vol. She wanted to get big payments out of the way, so instead of just paying the deposit, Reeves provided the full $500.

The negative feedback dotted wedding groups on Facebook, plus a planning site called The Knot, where De Vol has just one star.

“I've never seen anything like this,” Melissa Blayton, a hair and makeup artist, told 41 Action News.

Blayton entered the saga at the end of August. That's when De Vol asked for help after losing members of her team.

“I offered to take over the contracts and hire her to work for us to get her through whatever it was she was going through,” Blayton said. “Initially, she was on board, but woke up the next day and was absolutely not on board anymore.”

More on that later, but first, back to Reeves, who booked a hair and makeup trial with De Vol in September.

“She ended up not showing up,” Reeves said.

Reeves rescheduled but only received excuses.

"She even said, ‘It sounds so crazy. My wallet was stolen, then my account was flagged by the fraudulent department,’” Reeves said. “Something happened with her tire, I think.”

Reeves needed a backup, so she reached out to Blayton to be on standby. Still, she stayed in touch with De Vol, showing 41 Action News the text message she sent the Wednesday before the wedding.

When the wedding day arrived, De Vol was nowhere to be found. There was no call, no text. A member of Blayton's team handled hair and makeup at no extra charge aside from a tip.

But Reeves wasn't the only bride Blayton and other artists helped, doing so only for tips or at highly discounted rates.

“I know we have helped at least 10. We have two more this weekend," Blayton said at the time of her interview last week.

Reeves is a member of a Facebook group with 15 other brides who said they were stood up or De Vol was late to trials and weddings.

41 Action News reached out to De Vol, who said she was in the process of hiring an attorney and would respond to questions via email. Eventually, 41 Action News spoke to De Vol on the phone, and she agreed to sit down for an interview. Then she canceled the interview 20 minutes before it was slated to begin, saying her attorney advised her not to do it. She would not give us the name of her lawyer.

However, she did provide written answers to questions. De Vol said she is a mother of four who recently went through a separation and has been suffering from postpartum depression. She blamed one of her missed weddings on sleeping through an alarm because her medication had been doubled.

When she missed a wedding on Oct. 12, De Vol said, it was because she was in the hospital with multiple brown recluse bites and her phone died.

As for Reeves’ wedding, De Vol said she heard the bride had hired Blayton.

“I did not show up for her wedding due to her hiring a replacement artist,” De Vol wrote. “I should have contacted her when I learned about her hiring someone else. I was in the wrong for not doing so. I also should have been told by my client that someone else was hired and why.”

De Vol confirmed she asked for Blayton's help and said she sent contracts to her. However, Blayton told 41 Action News she never received them.

“I am doing my best to make things right,” De Vol wrote. “I do ask that it be kept in mind, this was my only source of income, and I have now lost 99 percent of my business. Refunds may be slower than you hoped, but they are coming.”

The contract De Vol gave Reeves stated that the $200 deposit is nonrefundable, “the only exception being in the extreme case of an unforeseen emergency or act of God, which prevents make-up artist from providing said services.”

For brides who contacted other artists, De Vol said she sees that as “contract cancellation on their part, considering the work they committed to me is now committed to someone else.”

But Reeves wants her full payment back, considering De Vol failed to show up and did not contact her.

In the meantime, Reeves also wants to warn other brides who might be in the market for a hair and makeup artist.

“I just really want to get the information out there,” Reeves said. “I don't think that she should be doing hair and makeup anymore unless she can show she's got it together.”

41 Action News reached out to the Missouri Attorney General's Office and learned there have not been any complaints about De Vol. A spokesman said brides who have been impacted can report their experiences here.