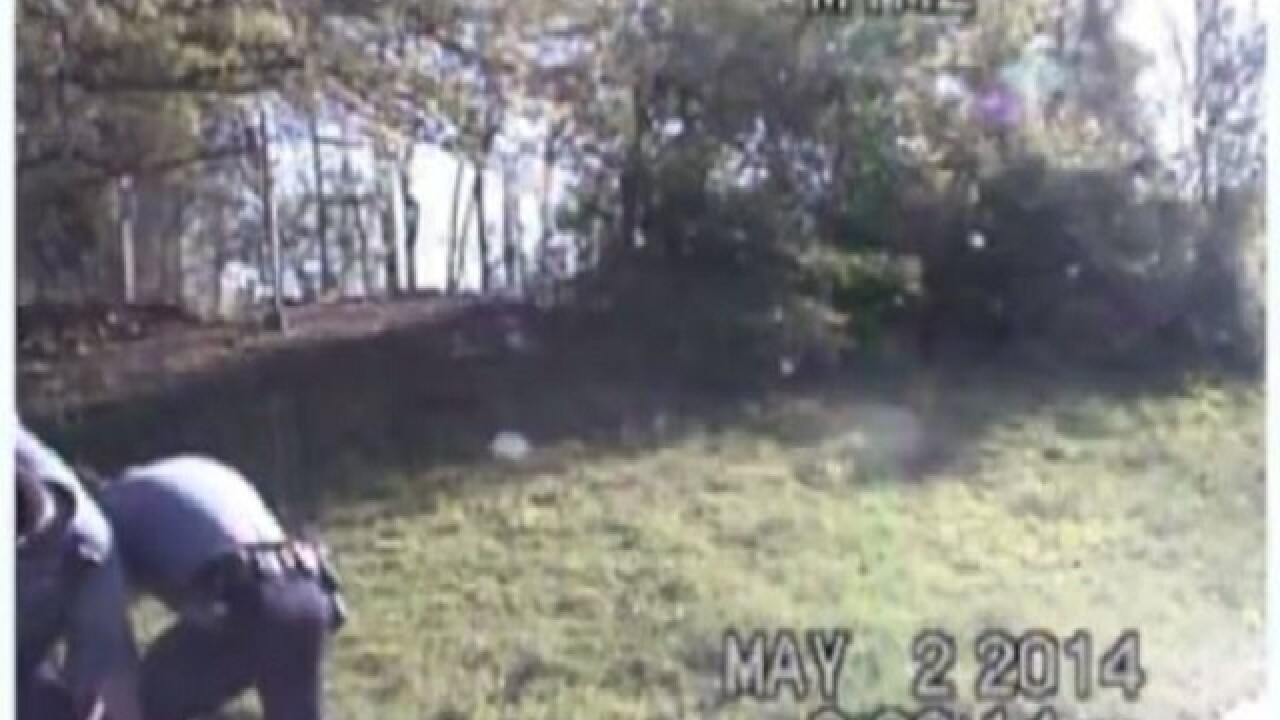 KCPD
<p>The video shows officers pummeling suspect Manuel Palacio, who can be heard pleading for them to stop.  </p>

Three Kansas City, Mo. men, two of them current police officers, are facing a lawsuit by a man who says dash cam video tells an eloquent tale of assault.

In May 2014, Officer Shannon Hansen, who's no longer with the department, Officer Jacob Harris and Sgt. Todd Hall, arrested Manuel Palacio for armed robbery, according to the police report. Following the arrest, Palacio was convicted of felony robbery and is serving time in prison.

Dash cam video of the arrest shows the man identified as Hansen punching Palacio four times as he lies on the ground. Hansen and one of the other officers on the video can also be heard threatening Palacio throughout the whole ordeal.

"You're not only going to get an a** whooping from us, but you're getting it from him," Hansen said, while pointing to the robbery victim's father, who was also on scene. "I'm giving him your address, your mom's f****** address and everybodies' address that you know and I hope his family comes over and takes a f****** ball bat to your f****** head."

The video starts with the officers searching for Palacio after a report that he stole someone's debit card at knife point. They find Palacio walking down the street and nudge him with their police cruiser. The officers step out of the vehicle with their guns drawn and demand Palacio get on the ground, which he does almost immediately.

One of the other officers in the video can be seen climbing on top of Palacio and saying, "You sit there and you don't open your f****** mouth, you understand? Otherwise, you are going to the hospital."

The threats and apparent assaults all appear to have happened while Palacio was complying with the officers.

"It's ridiculous," he said. "I think the public will feel the same way that I do: That I'm outraged that a man, guilty or innocent, is treated this way after he's arrested--after he's in handcuffs."

The Kansas City Police Department couldn't comment on an open investigation but sent over this statement:

"The department became aware of a possible case of police misconduct after several weeks ago. KCPD immediately initiated a criminal investigation, and it's ongoing at this time."

Capt. Tye Grant told the 41 Action News investigators that Hansen left the department this summer. He couldn't say why. As for Harris and Hall, they're both still working at the department in administrative positions, according to Grant.

The 41 Action News investigators went to Hansen's home to question him about the video but no one came to the door.

Too far or justified?

Michael Tabman, a former FBI agent, watched the video. He said the officers took the arrest too far.

"He (Palacio) did not fight, he did not resist, he complied," Tabman said. "There's no reason to get that aggressive with him."

Palacio can be heard crying on the video and claiming his innocence.

"He was under control of at least four police officers and he's handcuffed," Tabman said. "All he's doing is crying and claiming his innocents and he's allowed to do that."

Still, Tabman said the officers involved deserve a thorough investigation and for their side to be heard.

Porto said the investigation wasn't launched until a request was made for the dash cam video. Capt. Grant couldn't tell 41 Action News investigators why it took more than a year to launch an investigation into the incident.