41 Action News took city to court to get video 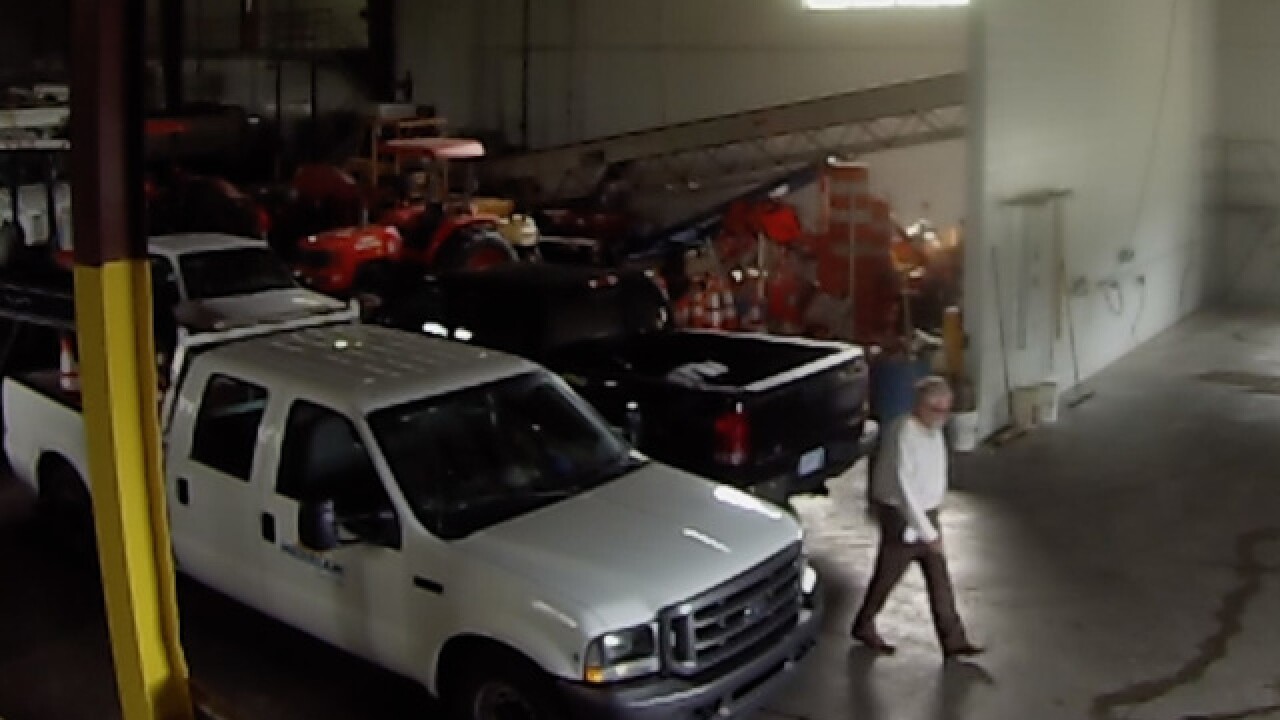 Carroll then pulls out of the garage and hoses off the floor to cover his tire tracks.

It's a scene captured multiple times in 19 videos over the course of roughly a year from October 2014 to September 2015.

"I would say that we were all a little bit in a state of shock," said Merriam City Administrator Chris Engel. "But obviously when you have video footage of it, it's hard to dispute."

41 Action News has exclusively obtained those videos after taking the City of Merriam to court to get them.

Engel was one of the first people to see the videos.

It led to Carroll being fired from his job after working for the city for 34 years.

Video camera set up after suspicion

Public Works employee Randy Fine brought Engel the videos after Fine set up a GoPro camera based on suspicions Carroll, who was Fine's boss, was stealing gas.

"He saw something that was wrong, he pointed it out and we absolutely appreciate that from all our employees," Engel said.

Court records and the videos show Fine made it increasingly difficult for Carroll to steal the gas, including placing other city vehicles in the way so Carroll had to move them.

In one instance, Fine wrapped up the hose so it would be more difficult to untwist to get gas.

Another time, Fine disconnected wires to the fuel truck, which must be turned on to use.

In one video, you can see Carroll having trouble, so he lifts up the hood of the fuel truck to reconnect wires to get the gas.

After getting the gas, the video shows Carroll pulling his truck out and then moving a city vehicle, which was there before he arrived, into that spot.

The video then shows Carroll washing his truck with city equipment for the next several minutes.

Court records also say another video Fine gave police, but not city leaders, shows Carroll urinating on the floor while he's hosing off his tire tracks.

When the 41 Action News Investigators asked Engel how he would characterize what Carroll did, he said, "Theft...theft, betrayal of the public trust."

On May 19, 2016, Carroll pleaded guilty to felony official misconduct in Johnson County Court. A felony theft charge against him was dropped in exchange for that guilty plea.

The 41 Action News Investigators asked Carroll after he left the courthouse why he stole gas from the city.

Carroll did not answer, but his attorney Jay Norton said, "He doesn't have comment at this time."

Before Carroll was sentenced in July, he told the judge he made a mistake and felt remorse.

But court records show the city was paying Carroll an extra $400 a month on top of his salary to cover expenses for his personal vehicle, including gas.

After Carroll left the courthouse following his July sentencing to 18 months probation, the 41 Action News Investigators asked him if $400 a month the city gave him was not enough.

Carroll walked away without saying a word.

Since Carroll was fired from his job, there have been changes at Merriam Public Works to make sure what Carroll did never happens again.

Specifically, the gas tanks for the lawn mowing equipment have now been equipped with a meter to better keep track of gas usage.

Record keeping has also been transferred from public works to the city's finance department.

"It's an internal control that needed to occur," Engel said.

The 41 Action News Investigators first asked the City of Merriam for the Fine videos last July. But city leaders refused, claiming they were part of Carroll's protected personnel file.

41 Action News fought back and took the city to court.

The judge ruled the videos are public record, opening the way for 41 Action News viewers to see them.

Records 41 Action News obtained show that fight cost the City of Merriam more than $8,600 in legal fees. Those bills will be paid by a company called Midwest Public Risk.

Records show the city has paid more than $144,000 to that company for various types of insurance for the current budget year.

The judge in his criminal case ended 62-year-old Carroll's probation in April, less than a year after that same judge sentenced Carroll to 18 months probation last July.
Both Carroll and Fine declined comment for this story.
Copyright 2017 Scripps Media, Inc. All rights reserved. This material may not be published, broadcast, rewritten, or redistributed.