Hill active in charities, volunteering as cloud hangs over his future 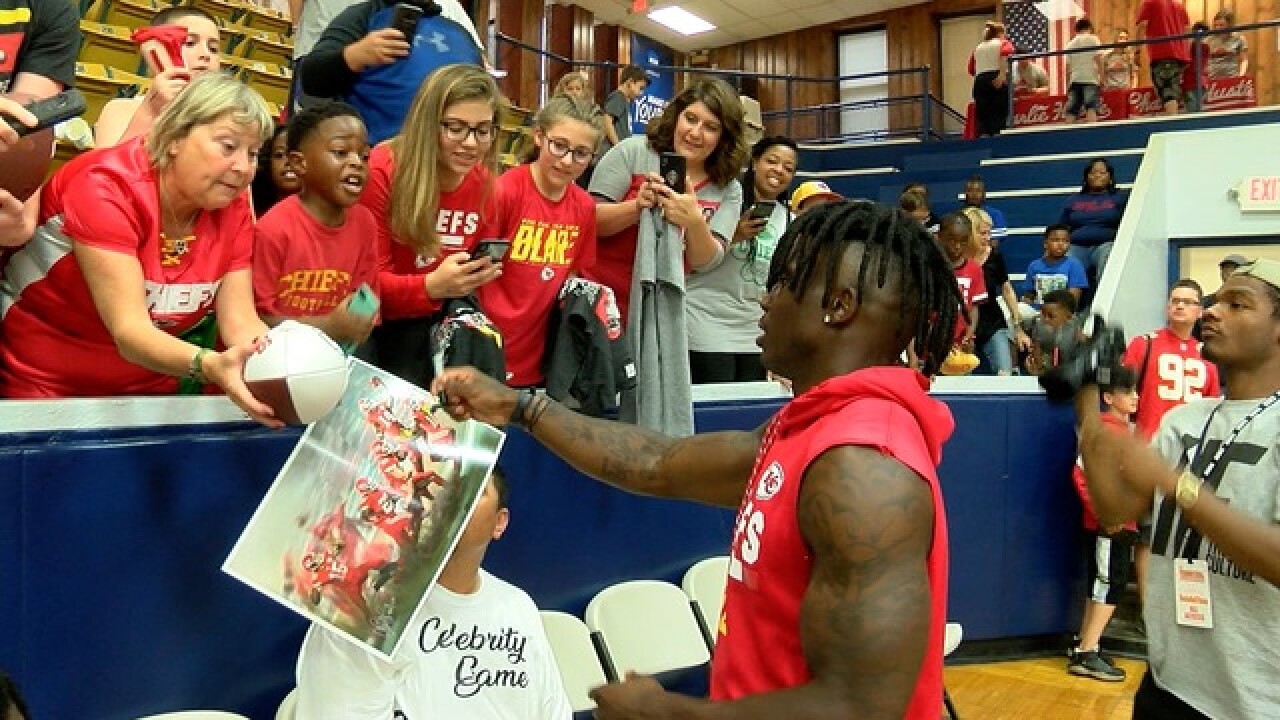 Copyright 2018 Scripps Media, Inc. All rights reserved. This material may not be published, broadcast, rewritten, or redistributed.
<p>Chiefs Wide Receiver Tyreek Hill signs autographs for fans just before the start of his celebrity basketball game.</p>

In March, Hill dunked a basketball and ran races against students at Pearson Elementary School in his hometown of Pearson, Georgia.

"Pearson Elementary, that's what I believe baby, so that's where I'm from, Pearson all day," he told our NBC-TV affiliate WALB-TV. "Just to be like such a big role model in a community is such a big thing to me. I like really accept that role."

Locally, Hill was supposed to be the host of a youth football camp at Shawnee Mission South High School in Overland Park on June 1 and 2.

Andy Danner of Pro Camps, the Cincinnati, Ohio-based company putting on the camp, says Hill will no longer participate.

Instead, Danner says he's looking for another host for the 240 boys and girls who've already signed up expecting the Chiefs' wide receiver to be there.

According to the original news release for the camp, each camper was supposed to receive a souvenir autograph from Hill and a team photo with him.

Hill was the host and participated in a celebrity basketball game at Rockhurst University last May to benefit his non-profit charity Tyreek Hill Foundation.

The foundation's website says its purpose is "empowering the youth and disadvantaged for a brighter future."

"My brothers got my back no matter what, you know what I'm saying," Hill said at the event. "Those guys have had my back since I came into the league."

Hill's charity and volunteer work has not just benefited youth.

Last September, he was named the NFL Players' Association MVP for week 3 for volunteering at a Kansas City food pantry.

"My biggest message for any kid that lives in a small town that it can be done, you know what I'm saying," Hill said in Georgia last month. "Look at me and look at my story."

It's unclear at this point how the possible domestic abuse issue might affect not only Hill's NFL career, but also his charitable foundation and other volunteer work in the community.