A Kansas City motorist blames his totaled car on a slow response to an uprooted tree that fell across Indiana Avenue near 29th Street. City records show a KCPD officer was dispatched to the scene nearly four hours after a 911 caller reported multiple drivers had nearly hit the tree.

KANSAS CITY, Mo. -- A Kansas City motorist blames his totaled car on a slow response to an uprooted tree that fell across Indiana Avenue near 29th Street.

Tyrone "Tidy" Dillard claims there was plenty of warning to block off the street to prevent the crash.

Dillard was driving on Indiana Avenue near 29th Street early Sunday morning, around 3:45 a.m., to get his girlfriend something to eat.

He said the power was out from the storm and the road was dark.

"I'm coming and next thing I know, I slam on the brakes and there's a tree coming from one side of the street to the other side, and I slid into the tree," Dillard said.

Photo of Dillard's car after he hit the tree. Photo courtesy Dillard.

A picture Dillard provided to the 41 Action News Investigators shows his head with a gash in it he said was from hitting the windshield. 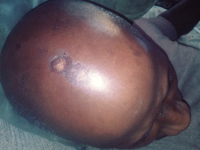 "It could've been worse because somebody almost ran into the back of me while I was on the tree," Dillard said.

City records the 41 Action News Investigators exclusively obtained show the first 911 call about the tree came in at 12:49 a.m.

The caller said by that time, the tree had "almost been hit multiple times."

The dispatcher determined the call was a Priority 4 call, the second lowest priority on the KCPD scale.

The department's definition states in bold type, "Priority 4 calls do not present any immediate danger to human life."

Because of the Priority 4 status, city records show an officer was dispatched to the downed tree across Indiana Avenue at 4:33 a.m., nearly four hours after the 911 call.

When the 41 Action News Investigators asked KCPD Spokesman Sgt. Jake Becchina if it's unusual for it to take three and a half to four hours to answer a call, he said, "There are things that take that long."

"We do make every attempt to get to every call in a reasonable amount of time regardless of the priority. It just kind of depends on how things come in," Becchina added.

A picture Dillard provided the 41 Action News Investigators shows officers put up police tape to warn drivers about the tree. But it was too late for Dillard. 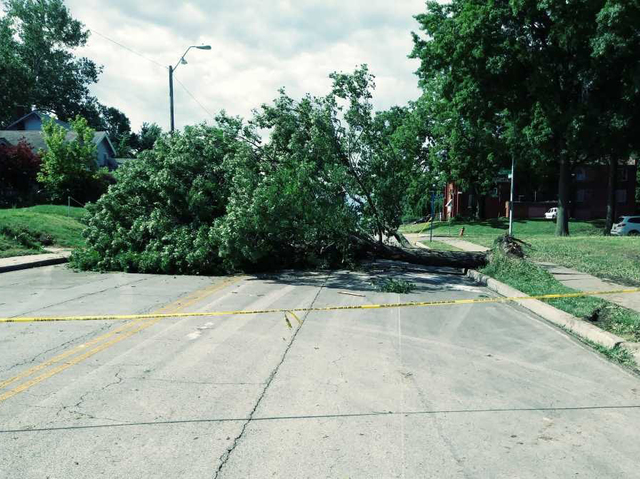 He said he crashed into the tree at about 3:45 a.m. and had his disabled car towed away before officers arrived.

"Ideally, we would like people to remain at the scene if their vehicle is not driveable," Becchina said.

Dillard's decision not to wait for an officer and get a police report may have proven costly.

He showed the 41 Action News Investigators where the tree he hit uprooted in the right of way between the sidewalk and the street, meaning it's a city tree.

Dillard sued the city to get reimbursed for his totaled car.

But in July 2018, a judge ruled against him due to a lack of evidence.

"If a tree was in my yard and it fell on a public vehicle, I'm going to take responsibility for it. I can't say it was an act of God. I'm either going to have to have insurance to pay for it or pay for it myself," Dillard said.

Dillard said because his car was totaled, he had to quit his job. He said he also had to cancel speaking appearances for an anti-bullying nonprofit organization and scheduled performances as a comedian.

Becchina said if a tree poses a danger to drivers like the one on Indiana Avenue Dillard hit, calling 911 is the best option.

City records show an additional 911 call and a 311 call were placed about the Indiana Avenue tree after police arrived.