Robert Jackson said two of those properties are vacant and don't have water usage.

He also said a different Robert Jackson owns one of the homes.

The 5900 block of Agnes Avenue features several abandoned and boarded up homes.

But Jackson is working to improve that neighborhood which he said also used to include drug dealers.

Jackson has purchased four houses within a couple of blocks of each other and is working to fix up the properties.

But he's also now dealing with an expense he didn't expect.

"I don't have any problem at all paying my bills as long as they're legitimate bills. I had no idea there were any issues until April of this year when I got a $3,500 water bill," Jackson said.

But it was only the beginning.

Jackson bought a couple of homes on Agnes Avenue in 2015.

Since he's bought the home, he said nobody has lived there and the water has never been turned on. 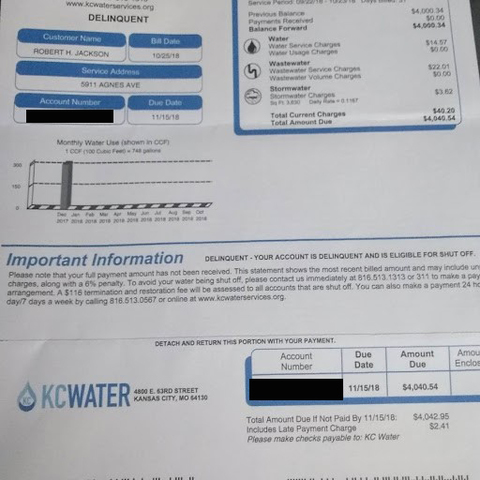 Jackson said his past bills there had been roughly $50 a month.

Jackson showed the 41 Action News Investigators the water to that home is off.

"This house, they're basically claiming that I used 250,000 gallons of water although nobody has ever lived in the house and there's only one bathroom. So it would have to be a lot of showers," Jackson said.

A representative would not go on camera.

However, KC Water did issue a statement.

During an ongoing review of delinquent accounts, KC Water learned Mr. Robert Jackson had purchased the home at 5911 Agnes in September of 2015 and had not notified us of the change.  KC Water back-billed Mr. Jackson for two years of water usage and accrued service charges.  A further review uncovered other accounts connected to Mr. Jackson.  KC Water will continue to work with Mr. Jackson to bring those accounts up to date.

Jackson said he notified the city of his purchase of the vacant homes.

But he didn't call KC Water because the line wasn't turned on.

Jackson said since he received the first big bill in April, he's contacted KC Water multiple times, including going to the utility in person trying to get the bills resolved.

"Nobody once contacted me and said, 'Hey, by the way, can we work this out or can we make a payment plan or here's what this entails,'" he said.

Records Jackson showed the 41 Action News Investigators show KC Water has put a lien on his home at 5911 Agnes Avenue.

However, after the 41 Action News Investigators started asking questions, a KC Water spokeswoman said there was a meter reading mistake on that same home which will reduce Jackson's bill by an undisclosed amount.

In an unfortunate twist, he also said he received another $2,000 water bill for another Robert Jackson for a home at 5409 Myrtle he's never owned.

Jackson also sent the 41 Action News Investigators a picture which he said shows KC Water repairing the line in front of his house at 5911 Agnes in April one week after getting his first big bill on the vacant house.

"Literally within a one month period of time, I got a bill, they came and dug up the yard, then put a lien on the house," he said.

KC Water encourages customers to contact the utility once a home is purchased in KCMO.

When a customer sells or buys a home, it is their responsibility to notify KC Water of the change of ownership which can be done online at kcwaterservices.org or by calling (816) 513-1313.  A buyer becomes responsible for water services charges on the date of purchase.  KC Water uses various official and public records to verify property ownership.  KC Water encourages customers to notify us if they receive an unusual bill or are unable to pay their bill.  Customers can monitor their daily usage and monthly bill by creating an online account at KCWaterServices.org.

A KC Water spokeswoman said every home gets a monthly service charge, even if the water is off, to help keep the system working and to pay for fire protection.

Jackson is not alone with his complaints about KC Water.

The Better Business Bureau of Greater Kansas City shows there have been 18 complaints filed with the BBB against the utility in the last three years.

Copyright 2018 Scripps Media, Inc. All rights reserved. This material may not be published, broadcast, rewritten, or redistributed.
Know of something we should look into? Leave us some info below.