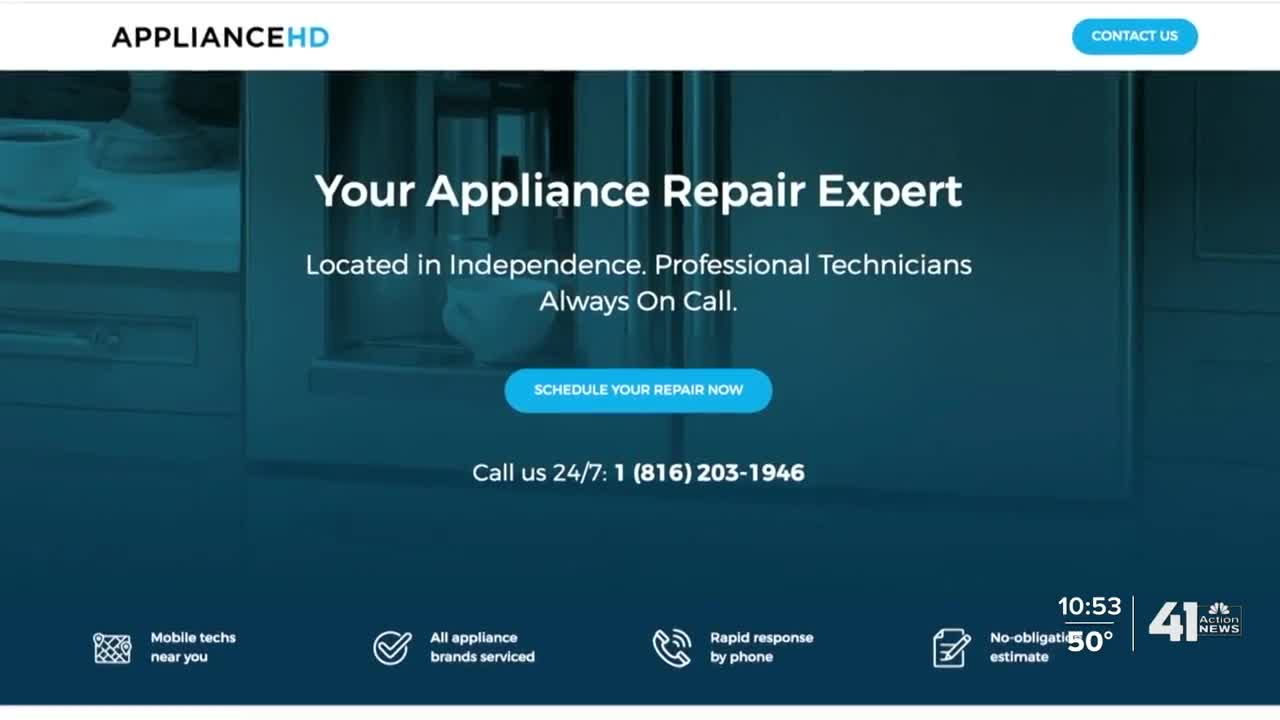 Sometimes the easiest way to find a repairman is to search online. That’s exactly what one Lee’s Summit woman did, but the repair ended up costing more than she could have ever imagined. 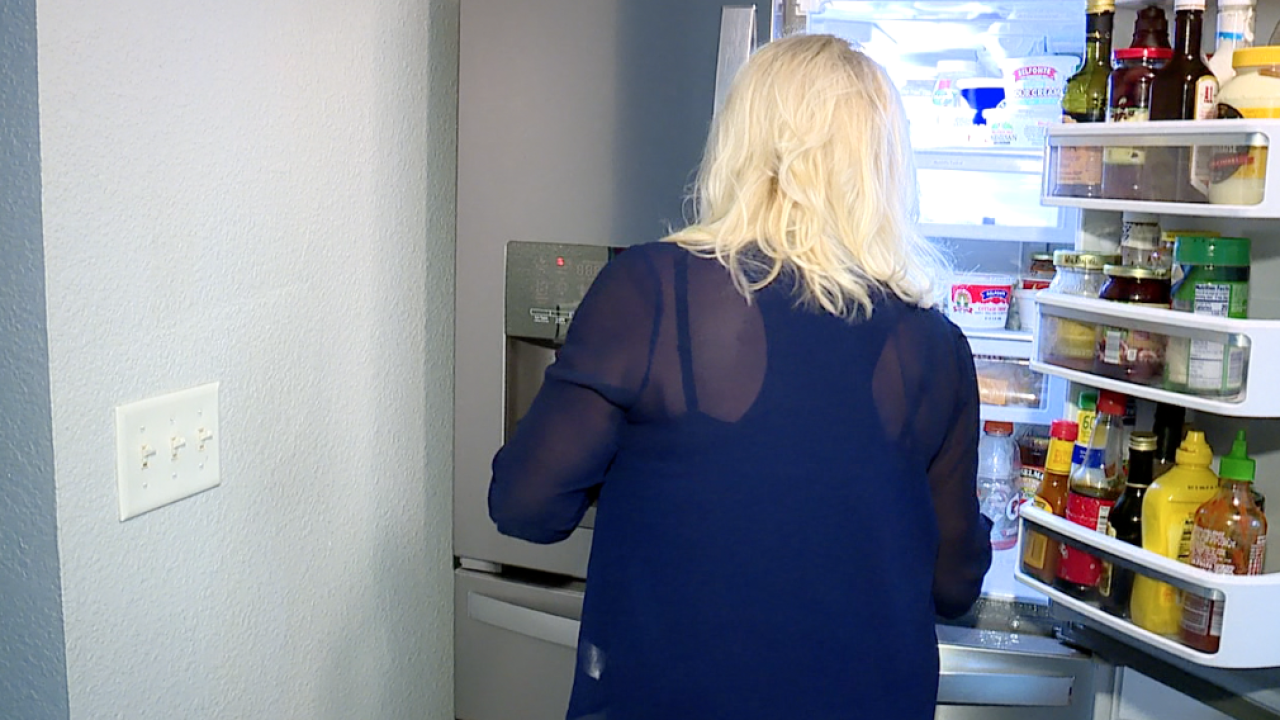 LEE'S SUMMIT, Mo. — A broken dishwasher or refrigerator can be a major inconvenience, and sometimes the easiest way to find a repairman is to search online.

That’s exactly what one Lee’s Summit woman did, but the repair ended up costing more than she could have ever imagined.

Brenda Allison had just filled her fridge with groceries when it started acting up.

“I got up in the morning, and it was making a really loud noise,” Allison said.

It still worked, but the sound was concerning. She decided to call a professional.

“Just went online, saw a place in Independence,” she said.

At least that’s where she thought the company, called Appliance HD, was located.

A Google ad for the company showed it had an 816 area code, and it claimed the business was “locally owned and operated.”

Allison said the company asked for her credit card number upfront, which she provided to schedule an appointment.

Here’s where things get a little confusing. The man who showed up at Allison’s house said he was just a contractor for Appliance HD, which is not locally owned and operated after all.

It’s actually a national call center, which charges a fee to connect customers with local technicians. The fine print at the bottom of the Appliance HD website says “all calls and jobs serviced by a 3rd Party.”

Appliance HD charged a trip fee of its own, then Allison also had to pay the repairman who showed up for the call.

“He charged me another $99 to ruin my refrigerator pretty much,” she said.

The repairman said his name was Mike. He provided a handwritten receipt showing he was with a company called Bristol Services, Inc.

However, the man told Allison to write the check to someone else, an individual 41 Action News has been unable to locate whose name is not Mike.

According to the receipt, Mike added a pound of freon to the fridge.

“It was kind of choking us in the kitchen,” Allison said.

She says her refrigerator stopped working altogether after his visit. She decided to call a different company.

Andy Pieri, who owns Arrowhead Appliance Repair, was shocked by what he found.

“I can’t even call them a company. They hand-wrote a receipt, had the check made out to a friend,” Pieri said.

Pieri believes the noise Allison heard was just the fan being frozen in place. He would have simply thawed out the unit and cleaned the drain tube. Pieri said instead, Allison’s fridge was overcharged with freon.

“It had seized the compressor and ruined the refrigerator, so it was quite a bit of bad news for her unfortunately,” he said.

Allison’s situation sounded familiar to Pieri. Several other customers contacted him after making appointments through call centers they thought were local companies. However, in those cases, no technician ever showed up.

“I kind of got suspicious and did a little bit of digging and called some of the companies they told me they had contacted,” he said.

Pieri specifically pointed out two companies with listings on Google.

One of them, Greenwood Appliance Repair, lists its location as an address off Main Street in Greenwood. However, a gas station, not a repair shop, is located there.

The city of Greenwood even posted a warning about it, saying there is no licensed business by that name in the area.

Another business listed on Google is called Grain Valley Appliance Repair, but there is no such business at the address provided.

Google has not responded to an inquiry about the vetting of these listings.

Both businesses’ numbers had 816 area codes. When dialed, an automated voice says only "appliance repair" and prompts the caller to dial 1 to make an appointment. The call takers who answered said the company’s name was actually Appliance Repair Men.

According to the BBB, The Appliance Repair Men is based in Tempe, Arizona and has 38 locations. The BBB page lists the website as theappliancerepairmen.com, and the number on that site again went to the same voicemail as the other companies.

The Appliance Repair Men has an F rating with the BBB, and the organization notes it has received a pattern of complaints about the company advertising on Google with local names and contact information, “giving potential customers the impression the company is locally owned and operated.”

When the 41 Action News I-Team tried to call the numbers again several days later, the automated message was gone. The calls instead went to a woman's voicemail.

The company did not respond to several calls, emails, and a tweet.

At first Appliance HD did not want to talk to the 41 Action News I-Team either.

A representative hung up on us during a call. However, the company eventually sent an email.

Appliance HD said it had already refunded Allison’s trip free and would also send her a check for the $122 spent with their “partner.”

The company identified him as Michael Bristol and said he was removed from their system because of the incident.

Appliance HD added it never charges a client before rendering services. Rather, it places a hold on the customer’s credit card to check its validity.

“All techs that use our platform are locally owned and operated and like most technology companies, tracking numbers are used on advertisements to track their effectiveness,” the email went on to say.

Appliance HD has since removed the 816 number from its website, and Kansas City and Independence are no longer listed as the business locations.

Michael Bristol did not answer multiple calls. The address for Bristol Services listed on the receipt does not exist, at least not with the zip code provided.

Allison had to borrow money to replace her $3,000 fridge.

Now she wants to warn others.

“I don’t want anybody else to go through something like this,” she said.

To avoid running into a similar situation, follow these steps: