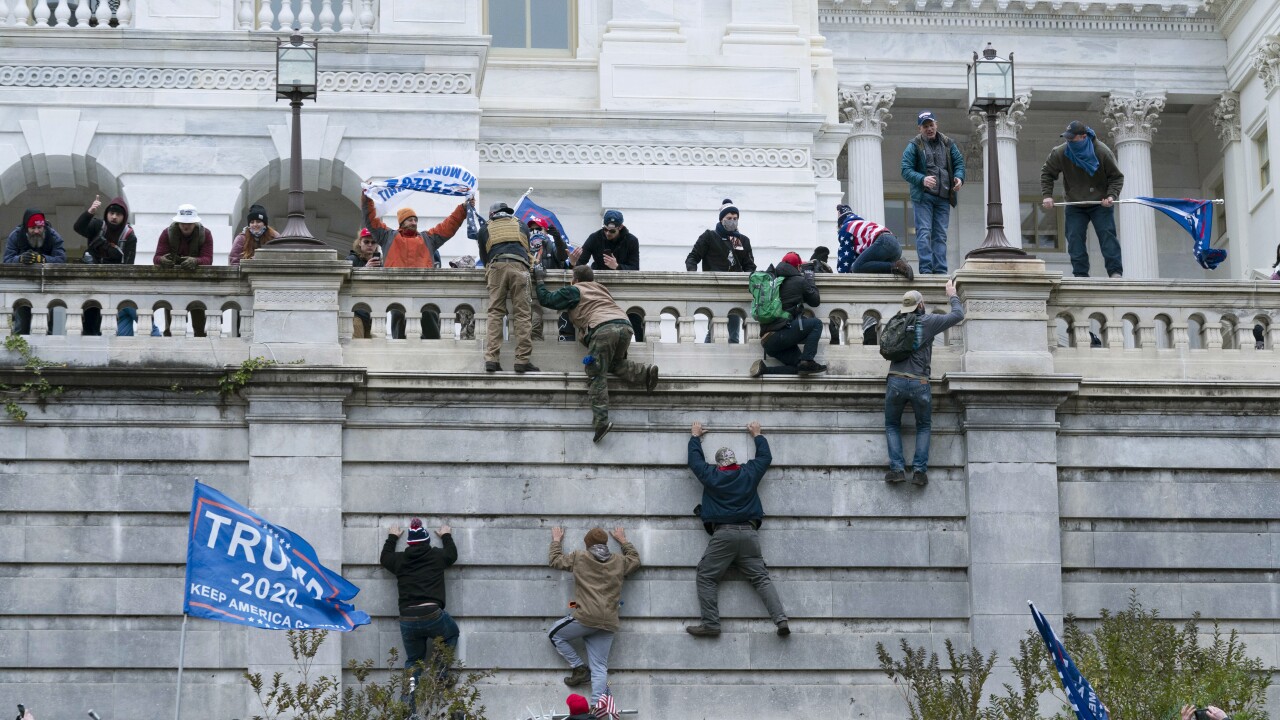 Supporters of President Donald Trump climb the west wall of the the U.S. Capitol on Wednesday, Jan. 6, 2021, in Washington. (AP Photo/Jose Luis Magana)

KANSAS CITY, Mo. — It's supposed to be one of the nation's most secure and protected buildings.

Four people are dead, including a police officer.

By Thursday morning, more than 60 rioters had been arrested.

This was one of the most disheartening events I’ve ever seen.

The storming of the U.S. Capitol building is an event that never should have happened, according to Michael Tabman, who worked as an FBI agent for 27 years.

"I thought what happened certainly was troubling by the failure of law enforcement to prepare for this," Tabman said. "There was every indication this was going to happen."

During a Wednesday morning rally, President Trump urged his attendees to walk to the Capitol building.

"We're going to walk down to the Capitol building," Trump said. "And we're gonna cheer on our brave senators and congressmen and women. And we're probably not going to be cheering, so much for some of them, because you'll never take back our country with weakness, you have to show strength and you have to be strong."

Moments later, Trump supporters tore down four layers of security fencing and made their way onto the steps of the Capitol.

"This was one of the most disturbing events I've ever seen," Tabman said.

Vidoes show the rioters scaling walls and pushing their way through police to get into the building. But, Tabman said the rioters never should have made it onto the steps.

"They should’ve had a strong barricade outside the Capitol, keeping these people from coming in," Tabman said. "Even if the barricade was breached, they needed to have a response plan."

Instead, the rioters entered the building. They vandalized the property, broke out windows and stole items.

One of the people who died was shot in the chest by police. She was a veteran of the Air Force.

The National Guard eventually arrived, after the President initially declined to call them in, according to multiple news sources.

A Black and white issue

The police response to Wednesday's event is drawing criticism from lawmakers at both the local and federal level for another reason.

On Thursday, President-elect Joe Biden pointed out the difference in force compared to that of the protests that took place over the summer.

"I got a text from my granddaughter, Finnegan Biden, who's a senior in her last semester at the University of Pennsylvania," Biden said. "She sent me a photo of military people in full military gear, scores of them lining the steps of the Lincoln Memorial because of protests by Black Lives Matter. She said, 'Pop, this isn't fair.' No one can tell me that had it been a group of Black Lives Matter protesting yesterday there wouldn't have been, they wouldn't have been treated very, very differently than the mob of thugs that stormed the Capitol."

Prior to Biden's remarks, the photo began circulating on social media with people offering side-by-side comparisons to Wednesday's police response.

The National Guard was called in to protect the Lincoln Memorial during the Black Lives Matter protests in the spring.

While the National Guard was eventually called Wednesday, Tabman criticized the timing.

"It certainly would lead us to believe there's some difference," Tabman said.

Thursday afternoon, the president's press secretary spoke to the news media and condemned the violence and riots but would not take questions from reporters.

Moments later, it appeared the ban on the president's Twitter account was lifted as he issued a video calling for healing. It's the first time the president publicly acknowledged Biden will be president.

Tabman said it's likely an analysis of Wednesday's events will reveal why there was a lack of law enforcement and why it took so long for the National Guard to arrive.

"Someone will be held accountable for not having their officers well prepared and trained," Tabman said.

Thursday evening, it was announced that USCP Chief Sund would resign effective Jan. 16.