The expenses are all tied to trips taken by Tom Van Camp, councilman for District 4.

In May, while looking through city records on an unrelated story, the 41 Action News Investigators came across several expense reports submitted to the city by Van Camp.

When looking closely at Van Camp's travels, it appears at least three of them involved some personal vacation time for the councilman.

The trips in question took place in December for three consecutive years.

According to the conference's website, the event took place from Dec. 5 through Dec. 7.

While the event took place over the course of three days, Van Camp's hotel receipt shows he checked in on Dec. 3 and left Dec. 9.

Receipts also show the councilman's meals, hotel room and rental car were paid for by the city, even on days where the conference was not taking place.

In Dec. 2016, Van Camp attended the same conference and again extended his stay at the cost of taxpayers.

This time, the conference was held in Orlando over the course of four days.

The trip to Orlando, which cost more than $4,000, included a rental car, valet parking and meals for each day Van Camp was in Florida. 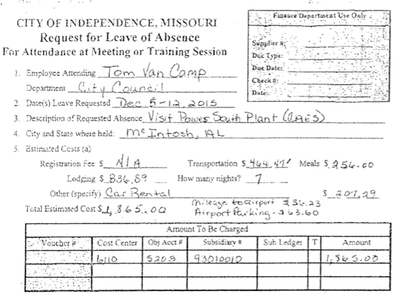 When elected officials in Independence request an advance payment for a future trip, they're required to fill out a leave of absence form.

In Dec. 2015, Van Camp requested to visit a power plant in McIntosh, Alabama.

However, receipts show Van Camp stayed more than three hours away at a hotel in Panama City Beach, Florida.

If Van Camp visited the power plant, it's not clear how he got there. 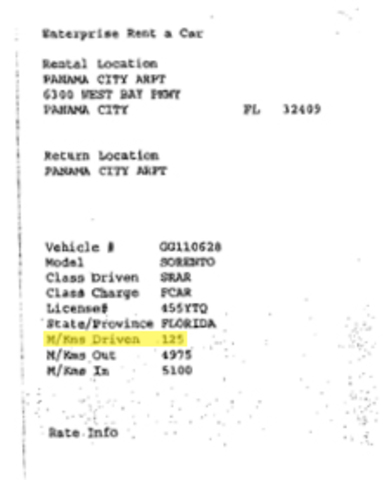 The distance from Panama City Beach to McIntosh is about 213 miles, according to MapQuest.

The receipt for Van Camp's rental car shows he only put 125 miles on the vehicle.

Though records show Van Camp did reimburse the city for three personal days, it's not known what he did the remainder of his time at the beach.

A request to speak with Van Camp about his travels was declined.

However, the 41 Action News Investigators caught up with the councilman at a ribbon cutting ceremony for the city's solar farm.

When asked about the conferences, Van Camp would not go into specifics about how his travels benefit the city, only saying, "Every time you go you bring back something new each time."

The councilman became frustrated and walked away as Meg Lewis, the city's spokesperson, stepped in and blocked 41 Action News from asking any more questions.

However, at a city council meeting in August, the 41 Action News Investigators attempted to speak with Van Camp again.

When asked about his trip to Panama City Beach, Van Camp would not comment and walked away.

At the end of the meeting, we tried to catch up with the councilman outside, but he left out a door in the back.

Van Camp has traveled to several other conferences where he did not extend his travel beyond the dates of the event.

Rental cars, valet parking and early bird check-in at the airport were also frequently included in those trips.

While Van Camp registered for all of the conferences, including the ones where he extended his stay, there's no way to know if he attended the sessions.

Expense reports are signed off on by three departments, including the city manager's office.

Zach Walker, City Manager for Independence, said the signatures on Van Camp's trips to Vegas and Orlando in 2016 and 2017 are not his.

Even if they were, Walker said he doesn't have the power to stop a member of the city council from traveling.

"Our elected officials are really left with a lot of latitude for decision making and discretion for what they believe to be fit and appropriate in terms of their own personal choices and what would constitute a business purpose," Walker said. "Ultimately, they're going to have to hold themselves accountable to the voters of the city."

Walker was not the city manager at the time of Van Camp's trip to Panama City Beach.

Most of Van Camp's travels were paid for with a city-issued credit card, or procurement card, also referred to as a P-Card.

The P-Card manual states in bold letters that, "No personal purchases are allowed."

The manual also states, "Purchases must be for the use and benefit of the City of Independence."

Walker said he could not discuss what 41 Action News found when looking into Van Camp's travels.

However, in an email, Walker said the city auditor is now reviewing the city's policies when it comes to spending on behalf of city employees and elected officials.

There's currently no cap on the amount of money elected officials in Independence can spend on travel.