Data the 41 Action News investigators obtained from the Kansas City Health Department revealed a cluster of 10 ZIP codes where as many as one in every 10 kids tested have dangerously high levels of lead in their blood.

Freddie Slaughter has spent more than 20 years in her east Kansas City home. For most of those years, Slaughter looked after children such as 4-year-old Jaliyah.

It wasn’t until last year that Slaughter suspected her house had lead paint in it.

“When the assessment came back, it was positive for lead,” Slaughter said. “I have children and if these children are in a lead-paint environment, it’s not safe for them.”

Nearly five percent of children who were tested in Slaughter’s ZIP code have high levels of lead in their blood.

According to health experts, no amount of lead in the blood is safe.

Every year in Kansas City, more than 300 children test positive for lead at levels of 5 micrograms per deciliter or above.

The pocket of ZIP codes where children have a high risk of exposure is mostly made up of low-income families and minorities according to Amy Roberts, Program Manager for the Childhood Lead Poisoning Prevention/Healthy Homes Program.

“Even with a lead level as low as two, kids have trouble with brain development and trouble with reading and math scores,” Roberts said. “As those levels increase, the issues can become worse.”

Once lead enters the bloodstream, it can cause irreversible damage to the brain, kidneys and other organs in the body.

Roberts said older homes are to blame for the cluster of ZIP codes that represent a high number of kids who test positive for lead.

“The housing is more dilapidated and may not be kept up as well,” Roberts said.

Houses built before the lead paint ban that went into effect in 1978 pose the greatest risk.

Roberts said it is even more likely homes will have lead in them if they were built before the 1950s.

Window sills, door frames and porches are the areas of the home where lead paint was most commonly used.

However, the lead often spreads throughout all areas of the home.

A little goes a long way

“More often we see lead that deteriorates into a really fine powder and it contaminates general house dust,” Roberts said. “The thing about lead dust is — it’s fairly invisible.”

Children 6 months-old to 6 years-old have the highest risk of exposure.

Two-year-olds are the most at risk, Roberts said.

Roberts said a small amount of lead powder, compared to that of a sugar packet, goes a long way.

“One package of 'Sweet'N Low' can contaminate a whole football field,” Roberts said. 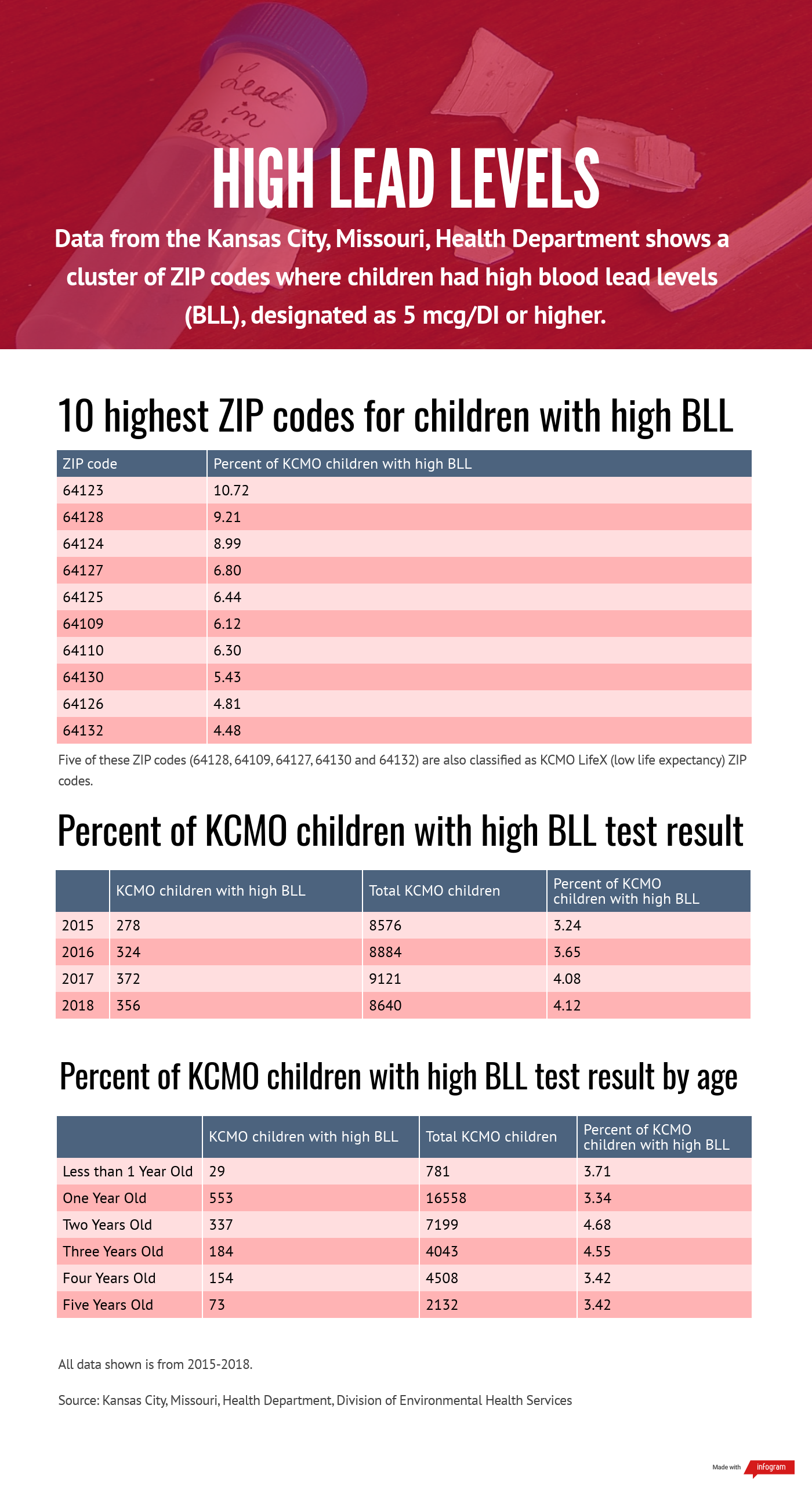 The health department gives out lead testing kits to residents for free.

Project Lead Safe KC is a grant-funded program that helps low-income homeowners and rental property owners get rid of the lead in their homes.

Crews from the program fixed up Slaughter’s home last year.

“A lot of the lead paint was around the window sills,” Slaughter said. “All the windows are new, siding is new and they got rid of it. There’s no trace of lead anymore.”

Most children only have their lead levels tested once between the ages of 1 and 2 years old. Roberts suggests children in high risk areas have their levels checked every year.

Slaughter’s been taking care of Jaliyah since she was 9 months-old.

As she thrives in school, blood tests came back negative for lead.

Slaughter said she wants people who care for small children to be aware of the risks and pay close attention what area of Kansas City they live in.

“It’s odorless, it’s colorless,” Slaughter said. “You may be picking it up and eating it, walking on it, sleeping on it. If [there’s] any place in your home that has lead paint you should address the situation right away.”