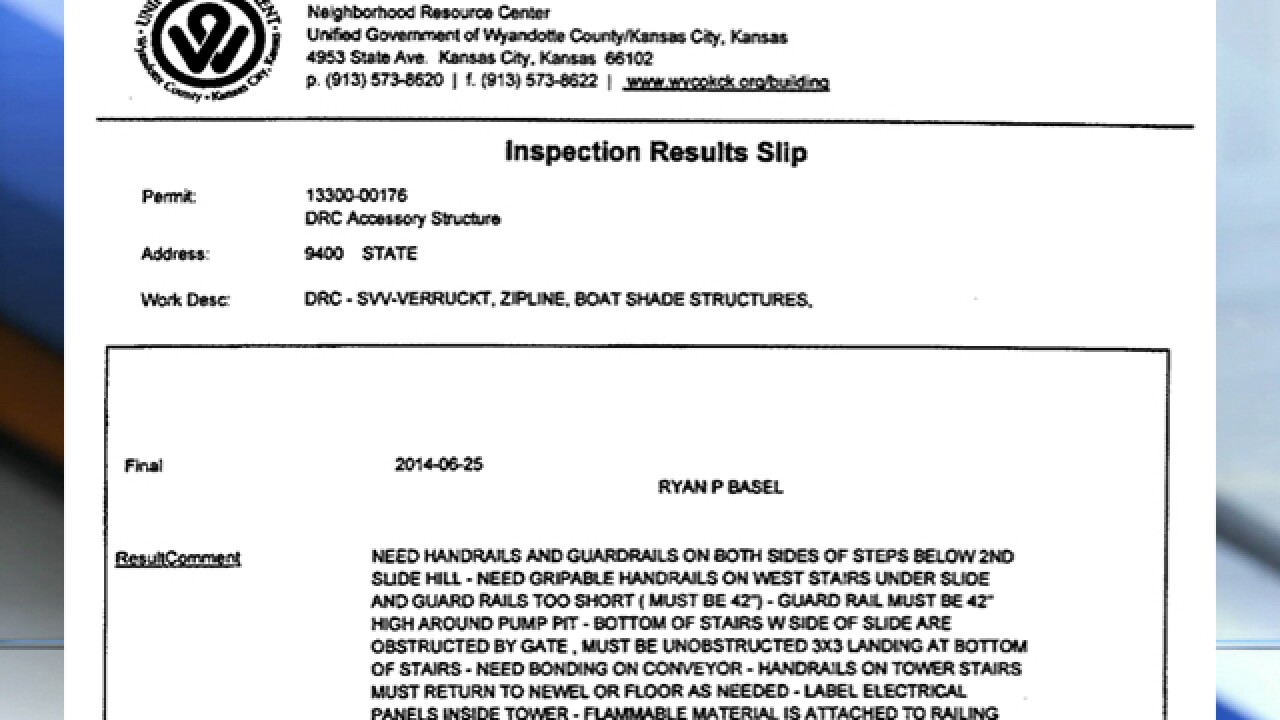 Copyright 2018 Scripps Media, Inc. All rights reserved. This material may not be published, broadcast, rewritten, or redistributed.
<p>Building inspections document from the Unified Government.</p>

Jeff Henry and John Schooley each face second degree murder and other charges after the death of a ten year old boy on the water slide in 2016.

David Hughes and John Zalsman are accused of giving false information to investigators about Verruckt's maintenance after the death of a 10 year old boy on the water slide in August, 2016.

Prosecutors claim Henry and Schooley were grossly negligent and reckless in the construction and maintenance of the water slide to the point it was only a matter of time when someone died on it.

The indictment also claims Henry and Schooley didn't have the proper training to design and construct Verruckt.

When the 41 Action News Investigators asked Henry in April if he had any formal training in engineering or physics, he said "No comment."

His attorney, however, acknowledged he didn't.

"Neither did Henry Ford, and he built cars," Ron Barroso said in April.

Before Verruckt could open to the public, the Unified Government had an approval process to determine if the water slide had been built according to architect and engineering plans.

Taylor said the UG had nothing to do with the design of the ride or verifying the safety of the ride design.

Problems caused delays in opening the slide and the water park to the public.

Inspectors issued a series of denials beginning in May 2013 all the way until final approval was given in July 2014, just before the ride and the park opened.

An inspection by the UG's Ryan Baselat on June 25, 2014 found handrails were needed in several places and found the bottom of the stairs on the west side of the slide was obstructed by a gate.

Baselat also found flammable material was attached to the railing.

A couple weeks later on July 8, 2014, Baselat denied a re-inspection, finding "the outer railing at the very top needs to be repaired".

He also found "flammable material is still attached to railing."

Another UG inspector, Jeffrey Hollinshed, also on July 8, 2014, deemed the slide "not ready," but noted workflow was being completed.

However, on July 9, 2014 - the very next day - records show the UG approved a final re-inspection for temporary occupancy.

Schlitterbahn Water Park and Verruckt opened to the public the following day on July 10, 2014.

Before the park opened, Schlitterbahn hired Alpha-Omega Geotech, Inc on State Avenue in Kansas City, Kansas to check the structural integrity of Verruckt.

The company supplied test results to the UG, but like the UG, it was not involved in testing the ride's design or overall safety.

The solution was to dig up the saturated ground and pour more concrete to seal the area to make a suitable base for the rebar.

In a June 11, 2013 letter, Alpha-Omega Project Engineer Garic Abendroth told UG Chief Building Inspector Anthony Hutchingson, "We were periodically called to the site to provide these services. Since we were not present on a full-time basis, we cannot make any sweeping statements regarding all aspects of the project."

"However, concerning those items that we were asked to inspect, it is my professional opinion based upon my best knowledge and belief, and that it thus constitutes neither a guarantee nor a warranty, that the structure has been constructed in substantial compliance with the project requirements," Abendroth added.

A year later, in a June 24, 2014 letter, Abendroth wrote to Hutchingson a couple of weeks before the park and Verruckt opened.

"All discrepancies that were identified during the course of the special inspections have been corrected," he wrote. "In conclusion, the work related to the special inspection items is complete and to the best of my knowledge was found to be in substantial compliance with the project plans, specifications and applicable provisions of Chapter 17 of the 2009 International Building Code."

The 41 Action News Investigators went to Alpha-Omega Geotech for comment.

President Allan Bush said on advice of attorneys, he couldn't comment other than to say about the Verruckt tragedy, "Our heart goes out to all affected."

Bush also said his attorneys would be watching 41 Action News' reporting on this issue.

The 10 year-old boy's family settled a wrongful death lawsuit out of court for nearly $20 million.

Neither the UG nor Alpha-Omega Geotech was a defendant in that case.

Four companies paid the family money as part of that settlement.

Verruckt is scheduled to be torn down in a few weeks with parts of it preserved for the criminal cases.