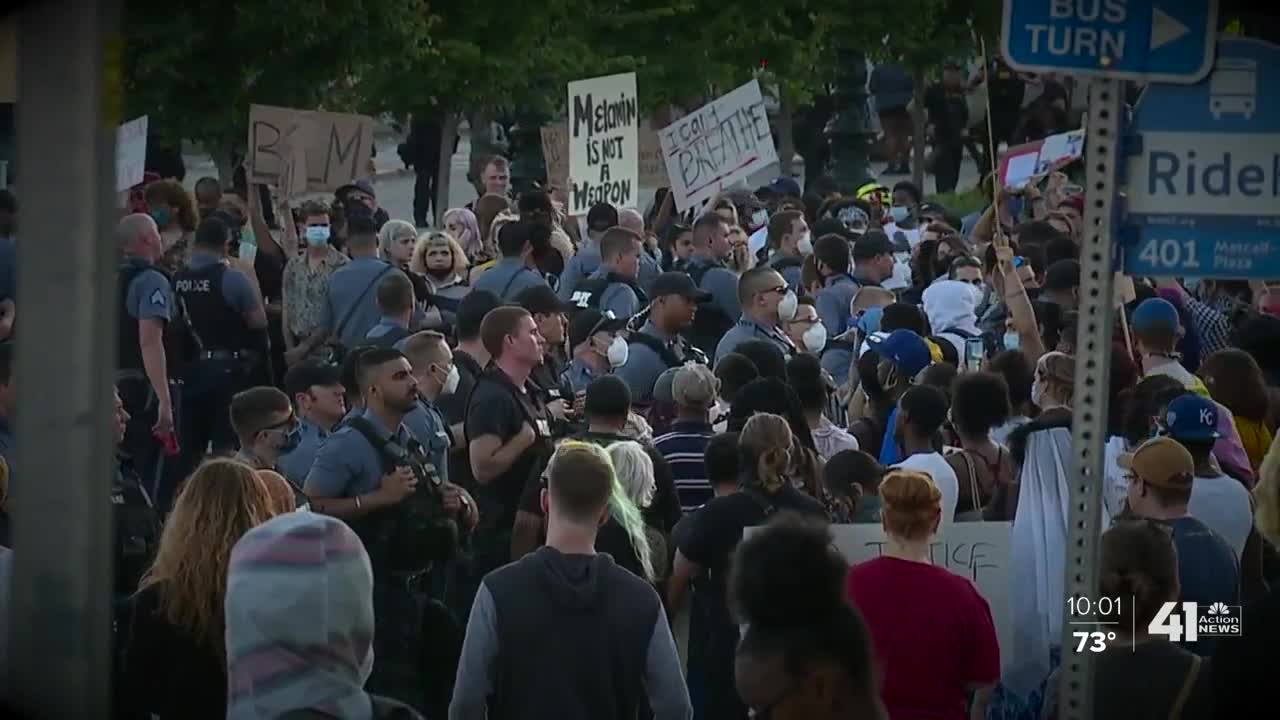 A Black Lives Matter protest to demand racial justice and an end to police brutality in the U.S., peaceful protesters gathered near the Country Club Plaza on Friday to make their voices heard. The protests were in response to George Floyd's death in police custody Monday in Minneapolis. 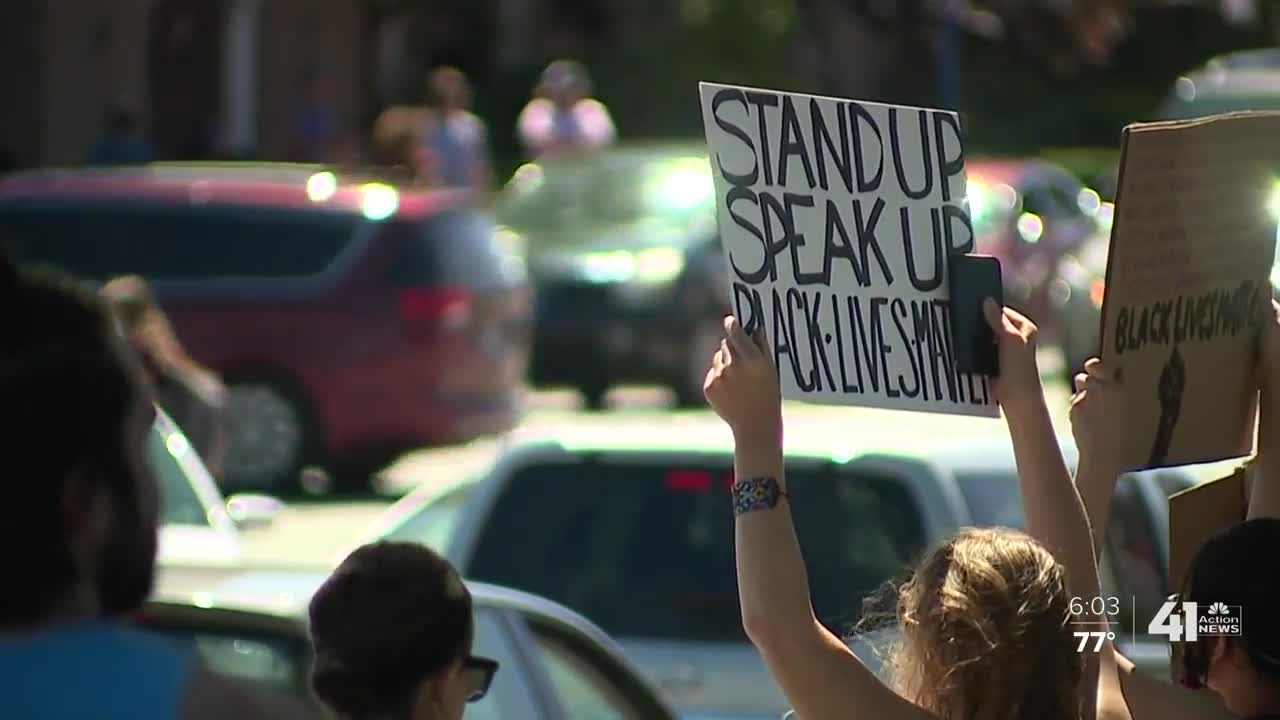 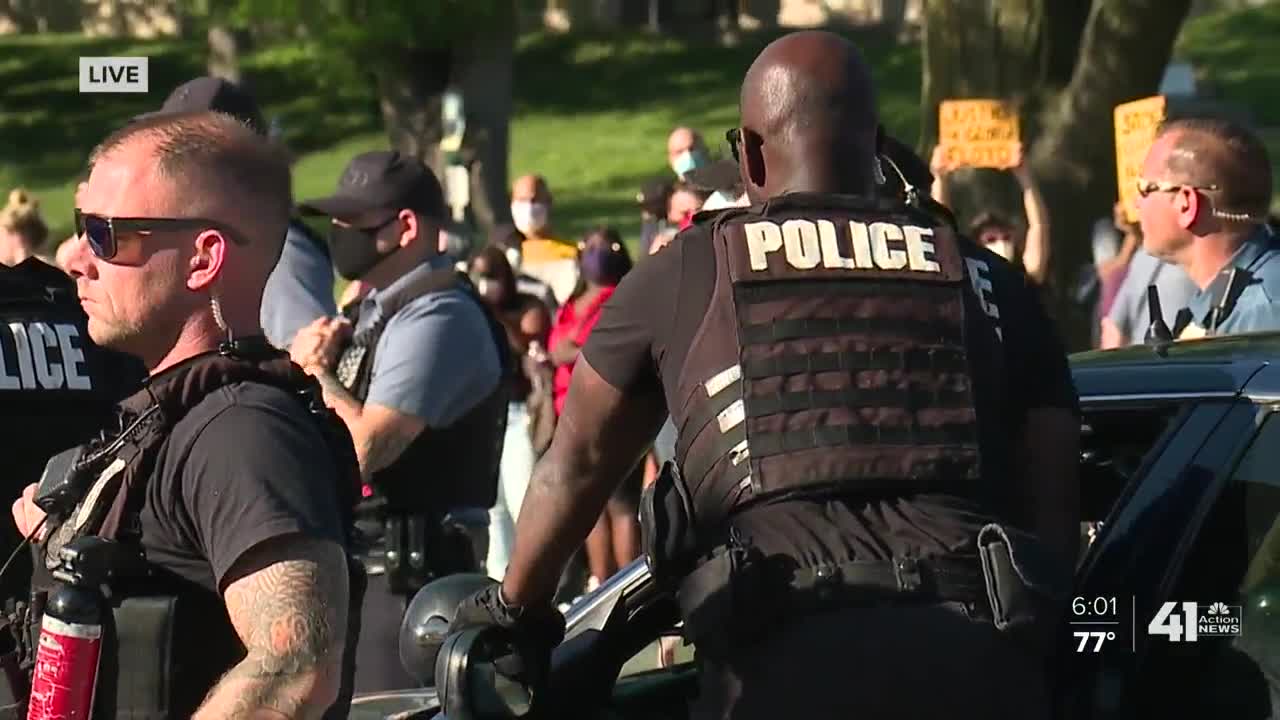 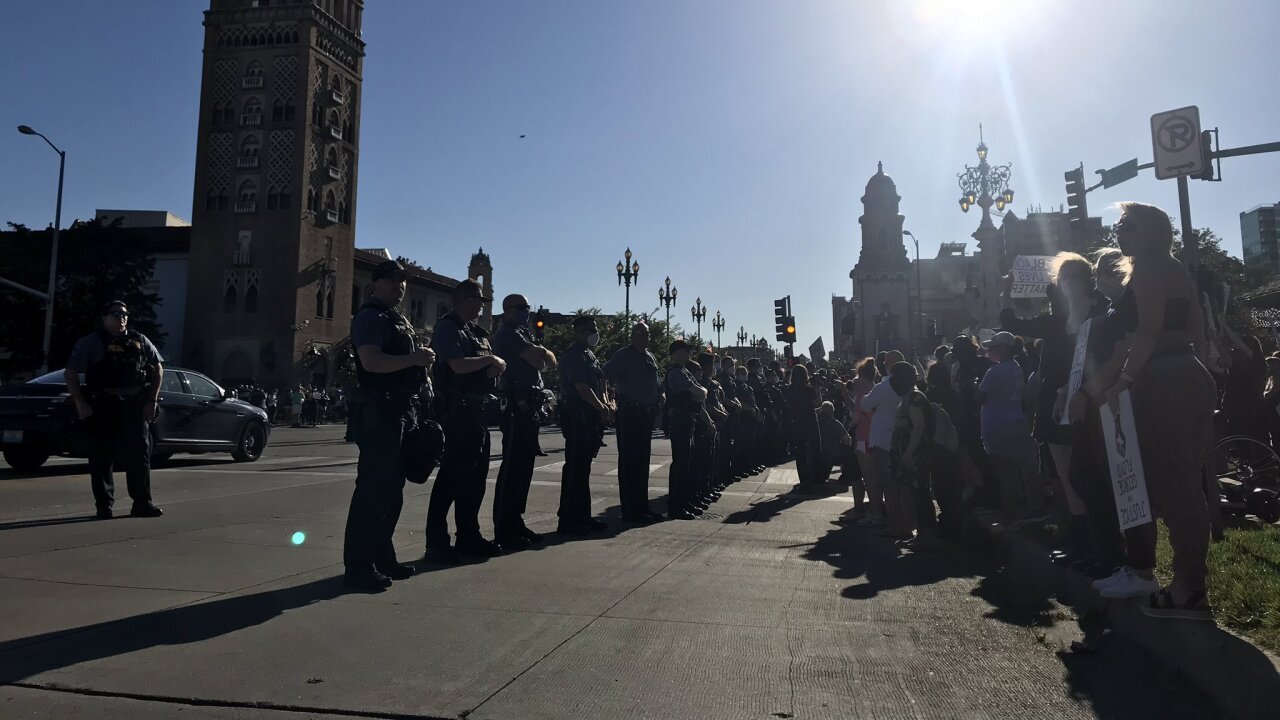 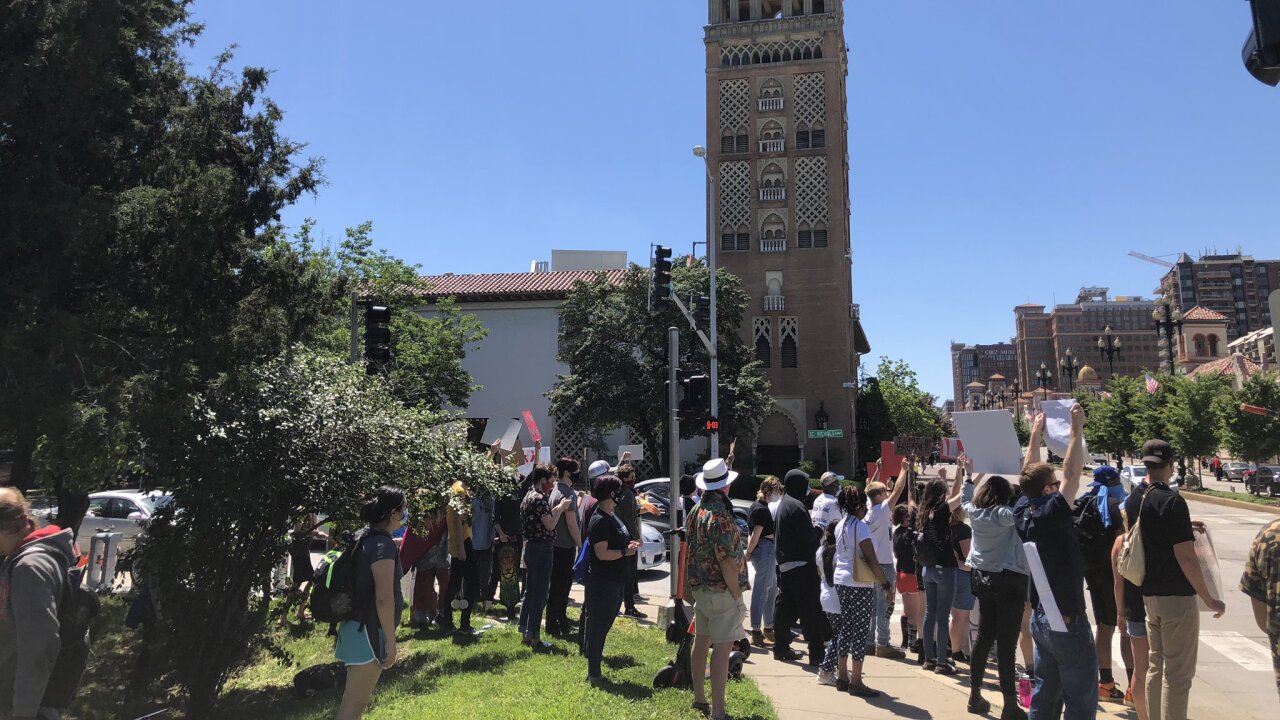 KANSAS CITY, Mo. — Hundreds of protesters gathered Friday afternoon at the J.C. Nichols Foundation in Kansas City, Missouri, joining thousands of others across the nation in protest of the murder of George Floyd.

The demonstration has remained peaceful, but KCPD called additional officers to the scene shortly after 5:30 p.m. as protesters began to block traffic in the area.

KCPD spokesman Capt. David Jackson confirmed Friday evening that the "passionate" protest has remained nonviolent and there had been no arrests as of 8 p.m.

A man spotted carrying a rifle escalated tensions in the east Plaza area.

Emotions are now very high after a man was spotted carrying a rifle over his shoulder. @41actionnews pic.twitter.com/GTBWe5yv0u

KCPD officers had donned riot gear by 8:30 p.m. as the sunset with hundreds of protesters still in the Plaza area.

KC Police in helmets and face shields are now face to face with protestors as we are into the fifth hour. @41actionnews

The current scene at Cleaver and Nichols. @41actionnews pic.twitter.com/jK2FBEEphX

Jackson said there may be graffiti in the area of Emanuel Cleaver II Boulevard and Wyandotte Street.

Police were seen escorting away a man seen arguing with other protesters. He was not cuffed and was not placed under arrest.

This is the first person we have seen police escort away from the fountain area. He’s not in handcuffs, looks like police are walking him away from JC Nichols Parkway. @41actionnews pic.twitter.com/lR26HNUaqa

KCPD CPD Chief of Police Rick Smith planned to stop by the Plaza, where roughly 75 of his department's officers are working to ensure the safety of roughly 300 protesters.

Protesters gathered around 3 p.m. at the fountain, which is located just east of the Country Club Plaza, chanting “No justice, no peace.”

KANSAS CITY, MO - Corner of Cleaver and Nichols, a “Justice for George Floyd” protest begins. Chants of “no justice, no peace.” pic.twitter.com/YfCJLK83z0

Protest moves to the front of the JC Nichols Fountain. “I can’t breathe.” @41actionnews pic.twitter.com/4GJjVmN0Yh

Over time, the protest expanded to both sides of the street.

Protest is now on both sides of the street and in the street. Incident-free and peaceful after this began shortly before 3pm. @41actionnews pic.twitter.com/GY0Y2470M8

Through the first hour, the protest in Kansas City had remained peaceful, but protests across the country this week have been marked by violence, including a protester who was run over in Denver and seven reported shootings at a protest in Louisville.

Many protesters expressed fear for themselves or friends.

Shortly before 5:30 p.m., protesters moved from the J.C. Nichols Fountain and moved the march to the streets of the Plaza.

The protestors have moved from the fountain and are now making their way through the plaza @41actionnews pic.twitter.com/6jn1IAgbun

That's when KCPD called in extra officers as protesters began to block streets on the east side of the Plaza. Protest organizers helped clean the streets, while the additional officers helped with traffic control.

Traffic is now blocked near 47th Street and Emanuel Cleaver as people sit and stand in the middle of the road. Police asking people to stand up and get on the sidewalk. @41actionnews pic.twitter.com/aWmhQGCBtZ

Here’s a closer look at the intersection where people are blocking traffic @41actionnews pic.twitter.com/TOTZFUsRkm

Here’s another angle of where traffic is being blocked. Seems like one of the protest organizers is asking others to stay on the sidewalk. @41actionnews pic.twitter.com/Z5KiBniciC

Protesters in Minneapolis even set a police station on fire Thursday night, the third night of intense protests.

Minnesota Gov. Tim Walz called for a restoration of order Friday and apologized for the arrest of a CNN journalists who were covering the protests live on air.

Floyd died in police custody after officers responded to call at a grocery store about a possible counterfeit bill. Bystander video captured Minneapolis officer Derek Chauvin driving his knee into the back of Floyd's neck as he laid face down on the asphalt with his hands cuffed behind his back, blood coming from his nose and amid pleas for help because he couldn't breathe.

Chauvin was charged Friday with third-degree murder and manslaughter in Hennepin County, Minnesota.

Chauvin and the three other officers who assisted at the scene of Floyd's arrest have been fired.

Arbery is the Georgia jogger who was gunned down Feb. 23 by a father and son, while Taylor, a former EMT, was shot and killed by plainclothes policemen serving a no-knock warrant in the middle of the night.